If you’re curious about Northwoods nature, then the Cable Natural History Museum is the place for you, especially this year as the museum unveils its new Curiosity Center.

A step through the stone archway marking the entrance to this newest, permanent exhibit transports you into an indoor forest where little visitors (and big ones, too) can climb a two-story tree to explore the oversized bird’s nest in the branches, walk across a ramp to slide down a log chute, and even send a flying squirrel across the room via zip line. On the forest floor, visitors can crawl into a bear den, turn over a rotting log to learn about the essential creatures that live underneath, and gather around log tables and stools to read or play games. There’s a puppet theater and a climbing wall, and even a live snake and salamander to study.

The Curiosity Center’s grand opening over Memorial Day weekend culminated more than a year’s worth of preparations. 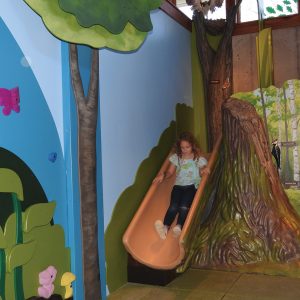 “We did a big fundraising campaign in order to hire KidZibits, which is a big professional exhibit-building company in St. Paul,” said Emily Stone, naturalist/education director with the Cable Natural History Museum. “They designed this Curiosity Center based on our dreams and specifications.”

The Curiosity Center’s grand opening also served as an introduction to the museum’s main exhibit for the year, focusing on pollinators, an extension of last season’s popular Bee Amazed exhibit. The main exhibit is designed and built each year by the museum staff and volunteers. For this year’s Pollinator Power exhibit, some of the Bee Amazed displays were repurposed and expanded to include wasps, butterflies, moths, flies, beetles, and hummingbirds. The exhibit includes a light-up wall display showing the seasonal cycles of various pollinators and oversized carnival-type games that help visitors match up pollinators with the appropriate plants.

“We focus all of our exhibits on being really interactive and engaging for all ages, so in the main exhibit there is a pollinator playground, with a crawl space for toddlers and giant fake flowers to crawl around on like you’re a pollinator. We have text and interactive activities that work for all ages—adults on down to middle-schoolers can read and follow the exhibit, and we have the tactile features for the toddlers and younger children.”

The exhibits, however, are not built with just children in mind.

“A fun thing about the Curiosity Center is that all of the elements are built big enough and strong enough that an adult can follow their toddler through,” Stone said. (For the record: Adults need not have a toddler in tow to take a turn in the tree climber.) 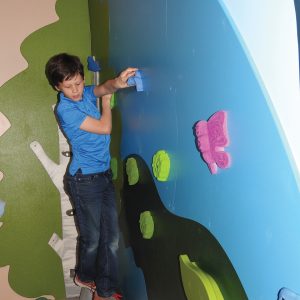 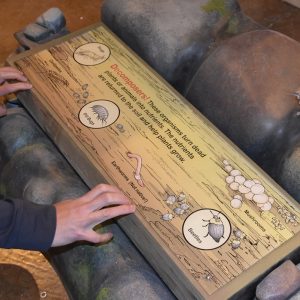 The center is also filled with details like the rotting log, above right, which flips over to reveal the ecosystem underneath.

The Curiosity Center and Pollinator Power are this season’s main attractions, but there’s much more to see and do at this long-standing museum. Now in its 52nd year, the Cable Natural History Museum is open year-round, with extended hours in the summer when the area’s population swells with the many families that vacation in northern Wisconsin. The museum expands people’s understanding of Northwoods nature through exhibits and a wide variety of educational opportunities.

Permanent displays include those centered around the museum’s collection of 6,000 natural history specimens, including some rare pieces like the now-extinct passenger pigeon. All specimens are native to northern Wisconsin. Some are rotated through displays throughout the building’s hallways, while others are kept protected in a climate-controlled storage room, visible to visitors through the glass wall. 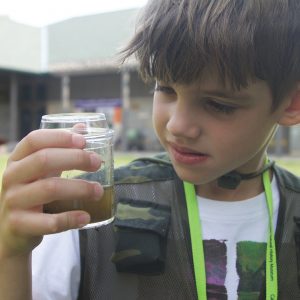 The museum is home to some live animals as well, all of which are used in educational outreach programs. There’s a red-tailed hawk and an American kestrel, both featured in live raptor programs held every Tuesday during the summer; a hog-nosed snake; a rat snake; and a tiger salamander.

A large classroom area provides ample space for some of the many programs sponsored by the museum year-round. The summer calendar alone is filled with more than 150 programs for all ages, including the long-running Junior Naturalist Day Camp, story time held in partnership with the local bookstore, and specific workshops and events on a range of topics including snake feeding and kids’ yoga.

The summer schedule also includes a series of drop-in nature tours to areas around the community including Wayside Wanderings, the museum’s natural play area located in the woods just down the road from the museum itself. 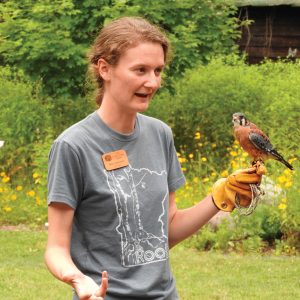 Stone said the museum has also been providing more training for the Wisconsin Master Naturalist program, modeled after the Master Gardener Program. Stone described these training sessions as “super nerdy adult field trips,” including a canoe trip to count sturgeon, electric shocking and counting fish, and plant pressing. Those adults who earn their Master Naturalist titles often serve as docents at state parks or in school programs, and participate in citizen science projects like frog call surveys or bird surveys, she said. 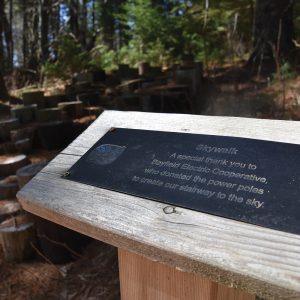 The Cable Natural History Museum has enjoyed strong local support over its 50-plus years, with individuals volunteering their time to teach classes, build exhibits, maintain the facilities, and much more. In addition, area businesses and organizations have been generous with their support, including Bayfield Electric Cooperative, which donated power poles used to build a “stairway to the sky” in the museum’s Wayside Wanderings, a natural play area in the woods.

The Cable Natural History Museum has the distinction of beeing the only museum in Wisconsin north of Eau Claire to have been accredited by the American Alliance of Museums (AAM). In achieving this status in 2016, the Cable museum joined an exclusive club; according to AAM literature, only 3 percent of museums in the country are accredited. 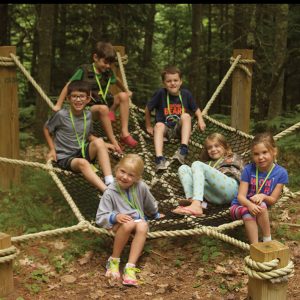 Equipment in Wayside Wanderings, such as this “spider web,” encourage natural play.

Among other benefits, accreditation helps facilitate continuous improvement, something the museum has been doing since Mary Griggs Burke first established it in 1967. Over the past half century, the museum has undergone additions, expansions, and new construction, while always staying true to its mission of “Connecting people to Northwoods nature through educational experiences that inspire wonder, discovery and responsibility.”

Fresh exhibits are added routinely, with museum staff constantly dreaming up new ideas. In fact, even as the finishing touches were put on the new Curiosity Center and Pollinator Power exhibit, plans were already underway for next year’s main exhibit, to be built around a nocturnal theme.

Your curiosity may be piqued here, but it’s not likely to be fully settled. More likely, the Cable Natural History Museum will make your curiosity just keep growing.—Mary Erickson