How do you measure success? Did you receive a passing grade? Accomplish a longstanding goal? Start your own business? Build a piece of furniture? According to the Cambridge Dictionary, the definition of success is “the achieving of the results wanted or hoped for.” I bet if I were to ask 10 people for their definition of success they would give basically the same response; however, what they “succeeded” in would be completely different for each person. 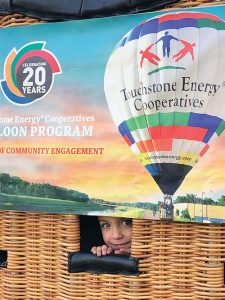 Success does not have a universal base to build from. For example, one person who gets a B on a project may view that as a success because a B is a passing grade. However, another person who had hoped for an A may not view a B as a success. Our standards directly reflect what our own personal wants and hopes may be.

So what does this have to do with Richland Electric Cooperative, and why should I care?

In the September edition of the WECN magazine, we told you how three local electric cooperatives came together to bring the Touchstone Energy hot air balloon to the Viola Horse and Colt Show. Like most small communities, Viola has had a difficult time lately. Flooding and COVID-19 ultimately resulted in the cancellation of the Horse and Colt Show the last three years. Viola is split between Vernon and Richland counties, and both Vernon and Richland Electric Cooperative serve members of the community. Our joint service to this community made it that much more important to us that we give back to it. 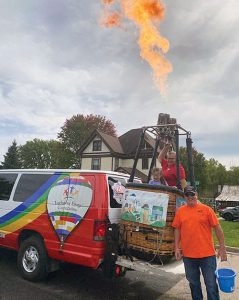 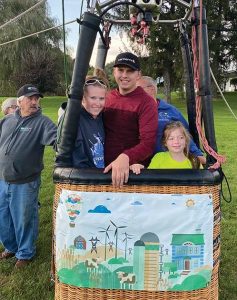 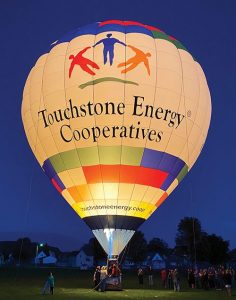 Left to right: The Touchstone balloon basket was a hit in the Viola Horse and Colt Show parade, with the flames whooshing out from the burners all along the parade route; there were lots of smiles as people climbed into the balloon basket for a tethered flight; balloon rides continued into the evening, with the balloon glowing against the dark summer sky.

As the day of the event grew near, we felt unprepared as we weren’t sure how to answer a lot of questions. When was the balloon going to fly? How high was it going to fly? How long would the rides be? The reason for our lack of answers was none other than weather. For obvious reasons the balloon cannot fly during windy days or rainy/stormy days, but much to our surprise, temperature does not play a significant factor; our pilots will be participating in a balloonfest in Hudson, Wisconsin, in February. 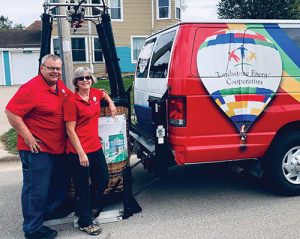 Thanks to Scott and Cynthia Wooge for bringing the Touchstone van and balloon. Scott Wooge was our balloon pilot.

Richland Electric Cooperative (REC), Vernon Electric Cooperative (VEC), and Dairyland Power Cooperative (DPC) were able to participate in the highly anticipated Horse and Colt Show parade. The parade is well known for bringing as many as 10,000 people to the community of approximately 700 people. For you statisticians out there, that is approximately 15 times the amount of people living in Viola. REC and VEC proudly displayed their utility vehicles in the parade, and in between their vehicles was the Touchstone Energy van and balloon basket that showcased the balloon’s burners. You could hear the cheers when pilot Scott Wooge ignited the burners that displayed a tremendous amount of energy as flames reached towards the skies. The excitement continued as we reached the end of the parade route, and interested parties began asking when the balloon rides would take place.

In typical Driftless Region fashion, the winds picked up in the afternoon, causing some concern about whether or not we’d be able to fly. However, our pilots were as cool as cucumbers and assured us that we were going to fly, even if it meant flying later in the evening. By late afternoon the pilots informed us that it was time to get started. Believe it or not, everything related to the balloon, including the basket and fuel, could be packed into a 15-passenger van—one of the many aspects of the balloon that still amazes me. 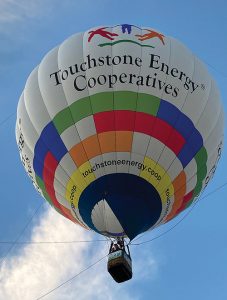 Once the balloon was inflated,
Viola Horse and Colt Show guests had the opportunity to take rides.

Staff from each cooperative jumped right in to help, and the entire process of inflating the balloon took less than an hour. The balloon was tethered to three vehicles and was first inflated using a high-powered fan. At that point, Wooge instructed us to walk inside the balloon where he stated, “Welcome to my world!” And what a world it was! The amount of room inside the balloon compares to large “sheds” you see around the Driftless Area—77,000 cubic feet, which is the equivalent of 77,000 basketballs.

Once the balloon was fully inflated there was once again reason for concern as we did not see many people waiting for rides. We definitely had our doubts. Once again, Wooge pushed our concerns to the side, assuring us that “once we are in the air, people will come.” He couldn’t have been more right. Shortly after volunteers from the co-ops had their turn, visitors to the event made their way to the balloon. Before we knew it more than 50 people had made their way and the line continued to grow.

The rides continued for over two hours, and the excitement and joy we felt from the community was exactly what we had hoped for. Many times we heard, “This was on my bucket list,” or “I never thought I would be able to do something like this.” But perhaps most rewarding of all for us was the amount of “Thank yous” we received as well as the smiling faces we saw throughout the evening. 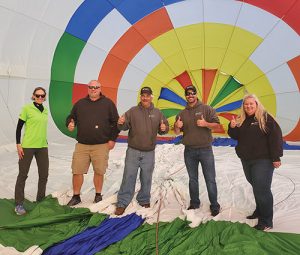 When the balloon was out of fuel it was time to pack everything back into the van. Because of all the volunteers from the cooperative, the process was made that much easier. The balloon went back into its large bag, which I know would not be big enough to even hold all my hunting clothes, and the basket went back into the van. Our pilots greatly enjoyed the Driftless Region and told us they hope to be back before heading back home to St. Louis.

I circle back to my beginning question: What does this have to do with Richland Electric Cooperative, and why should I care? I think it should go without saying that we are more than an electric cooperative. Our number one priority is safety and keeping the lights on. But we view ourselves as so much more than that. In the past year we have been able to accomplish so much despite the challenging circumstances, and hopefully you are proud of what we have done. We don’t want to be just an electric cooperative—we enjoy participating in community events, providing scholarships, educating the public, offering giveaways, and we couldn’t do that without your continued support.

In closing, if you were to ask me how the Touchstone Energy Balloon went over at the 90th Viola Horse and Colt Show, I would have one simple word. Success.