Twenty-five hundred miles from Wisconsin, south of the Mexican border in a primitive, rural village of Guatemala, there is an American flag flying high, side-by-side with a native flag. It was placed there just weeks ago by the villagers as a symbol of gratitude for the life-changing mission taken on by 12 linemen from electric cooperatives in Wisconsin, Illinois, and Iowa. 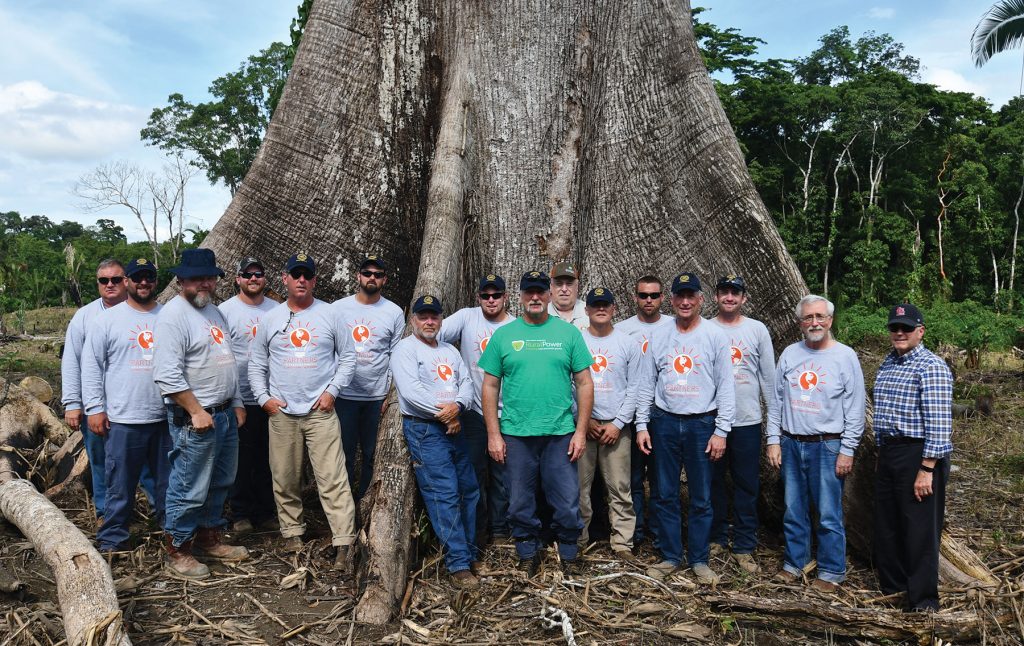 At a time when many Americans consider “roughing it” to be a hotel without Wi-Fi, in far corners of the world there are villages of people, mostly farmers, living simple but arduous lives without electricity or running water, much like rural Wisconsin less than a century ago. 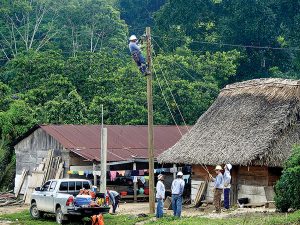 Rural Wisconsin’s past is the present for the north-central Guatemalan village of Tierra Blanca Chixoy, where until just recently, a labor-intensive life without modern conveniences was the norm. Rural Guatemalan families survived without electric lights, refrigeration, air conditioning, or internet. Most of the tasks required for daily living—from washing clothes to grinding corn—were done completely by hand.

In Wisconsin, it was the advent of electric co-ops, following the Rural Electrification Act of 1936, that connected Wisconsin’s rural communities, and the bulk of the agriculture industry, to the grid. By 1950, most Wisconsin farmers were enjoying increased productivity and the efficiencies that come with electric power, thanks to the co-ops’ commitment to extending service to the customers left behind by power companies. 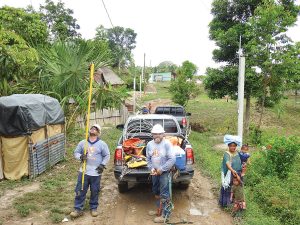 Greg Falde (center), Pierce Pepin Cooperative Services, is ready for work as a family passes by.

Generations later, the community-minded mission of electric cooperatives remains intact. The Partners for a Brighter Tomorrow program is a partnership with NRECA International, which is the philanthropic arm of the National Rural Electric Cooperative Association (NRECA) working to promote economic prosperity in developing countries through technical assistance and rural electrification. This project is fueled by the desire of local co-ops to help global neighbors. Mostly recently, the Midwest-based team, including four Wisconsin linemen, spent three weeks in Chixoy to bring electricity to 50 homes, a school, church, and health office, and a brighter future to those who live there.

“Honestly, for some of the people we’re building lines for, for the first time ever, we’re their last hope,” said Ingrid Hunsicker, senior program manager working in NRECA International’s Guatemala office. “No one else is looking at building any lines for these remote villages. They’re the left behind, so the co-ops are doing a big service for the generations to come.”

A Global Brotherhood in a Foreign Land

When boots hit the ground in Guatemala, it was the first time the 12 linemen from the Midwest had met, and they had an instant connection with each other. In spite of the language barrier, they also bonded right away with linemen from the local utility, Empresa Municipal Rural de Electricidad (EMRE), and area tech school students learning the trade.

“The bond was almost instantaneous,” said Mackenzie Yarbrough of Central Wisconsin Electric Cooperative in Rosholt. “We’ve been having a lot of fun and working hard.” 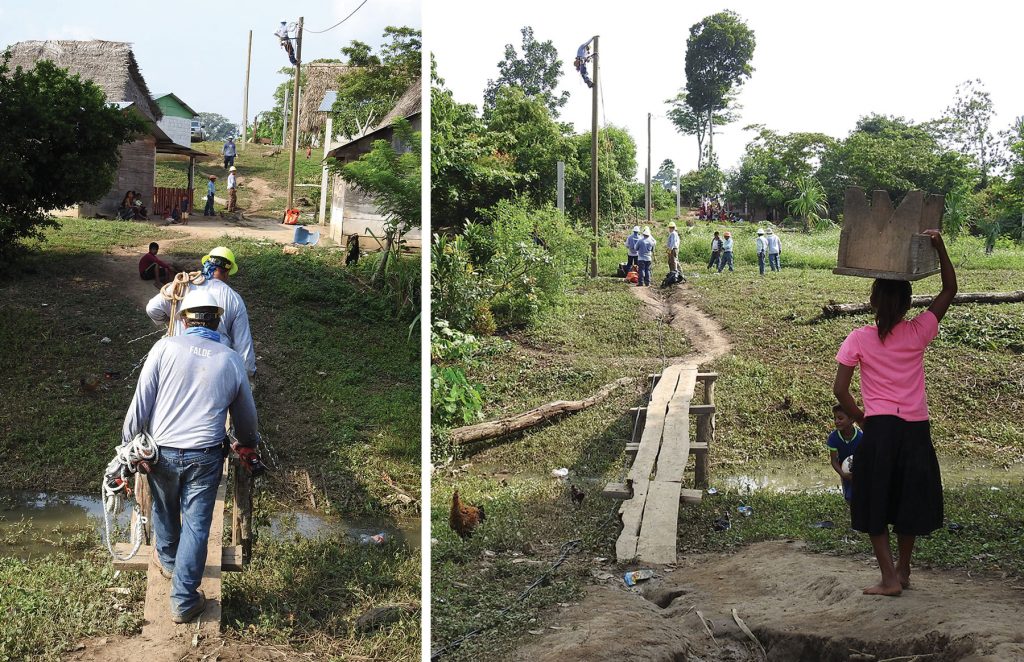 Linemen cross a footbridge—the only access to the poles—to a work site.

While the brotherhood came easy, tackling the task at hand did not, due to intense conditions, beginning with the commute. The daily trip from the hotel in Playa Grande Ixcan to the village worksite was only 30 miles, but it took about 90 minutes one way, due to the rough, jungle terrain. The bumpy, gravel path winds through moving water, and over scant bridges missing full-length boards, exposing the rushing water below. The crew had to return before dark, in order to cross the bridges safely.

And then there’s the heat. Temperatures regularly topped 90 degrees, with humidity levels that hung on the northerners like a heavy, warm blanket. “It’s like nothing any of us have ever felt before,” said Yarbrough. 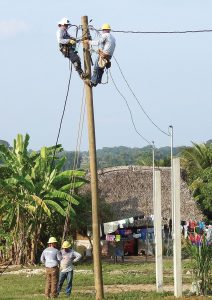 Crews of four linemen worked together. Each crew was a mixture of Wisconsin, Illinois, and Iowa electric co-op personnel.

Perhaps the greatest challenge though, was doing the job they know, without the tools they are accustomed to back at home. With no bucket trucks on the job site, they climbed poles to string primary lines through the jungle and hang transformers.

“We were all soaked in sweat and these guys (the locals) are all running around, not sweating at all because they’re used to it!” said Zach Taylor of Vernon Electric Cooperative.

A Community With So Little, Yet So Much

The linemen say their experience was shrouded in the ever-present reminder that life is good in America. Far, far away from the world of Netflix and Snapchat and Uber, in this village, the average home is made up of a dirt floor and boarded walls, with cracks open to the elements. Beds are slabs of hard wood, with no mattress or blankets, and they are typically covered by a mosquito net.

No electricity means no refrigerator or freezer, so all meals are made daily, from scratch. Corn is the base of most meals, and it’s ground by hand. A nearby creek is used for bathing, laundry, and drinking water. It is common to see a woman of the village hauling the laundry or produce back to her home using a basket balanced perfectly on her head.

“Their whole day is about survival,” observed Geri Miller, a photojournalist who documented the trip for Wisconsin Energy Cooperative News. 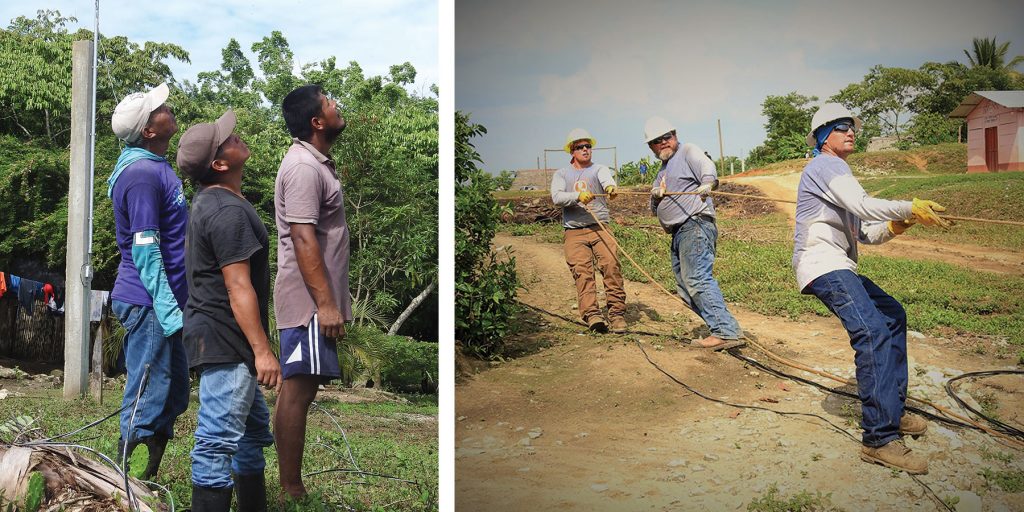 The men of Chixoy are mostly farmers, and without any of the modern conveniences that come with electrification, they put in long days of hard labor in the fields.

“These people are out in the fields working when we show up in the morning and they’re still there by evening,” said Yarbrough. “They plant corn by hand, they pick it by hand, they chop it by hand, and then they replant again.”

The linemen hope bringing electricity to the hard laborers of this village will allow them to work a little less, and enjoy each other more. But they all noted that the locals, particularly the children, are already filled with joy and happiness. 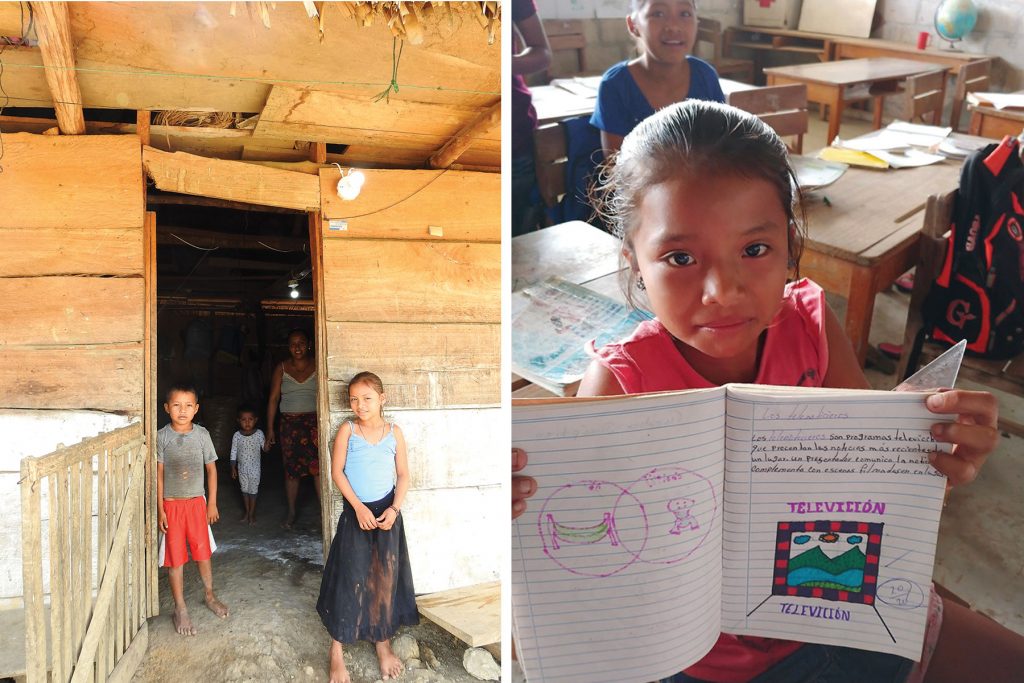 Left: A family with brand new lights inside and outside their home. Right: A young student proudly displays her schoolwork: a few sentences and picture of a television.

“The lifestyle here is, to me, just so unique. I’ve never seen anything like it,” said Lee Alberson of Eau Claire Energy Cooperative. “You have kids that are willing to take an empty water bottle and play with it, because it may be the best thing they’ve had to play with in a long time. And they’re happy with it.” 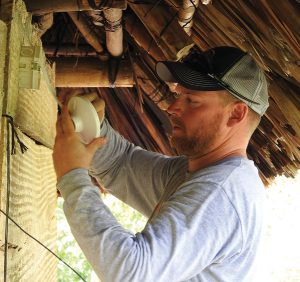 It took weeks, but finally, the linemen flipped the switch, which they hope will open up a world of opportunities for people who spent so long being happy living with just enough.

“They’re a pretty stoic people, and then we started turning their power on and then we see a lot of smiling and happy people around,” said Greg Falde of Pierce Pepin Cooperative Services. “I don’t think I met an adult in the village that didn’t shake my hand while I was there.”

In addition to the mission of electrifying the village, this group of linemen, with the help of their co-ops, raised funds to bring water filters for each family, as well as backpacks full of school supplies, and new shoes and toys for the kids. 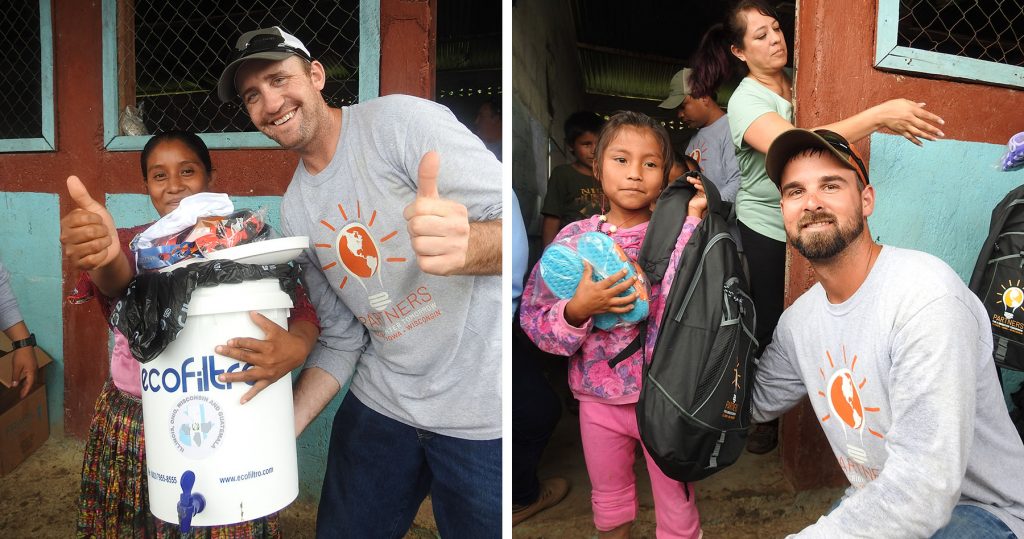 “It’s just an incredible testament to the character of people that went on behalf of the state of Wisconsin. The humanity and humility they showed every dayÑthey did us proud,” said Wisconsin Electric Cooperative Association President and CEO Stephen Freese, who traveled to Guatemala, along with National Rural Utilities Cooperative Finance Corporation (CFC) Vice President/District 5 Representative and Taylor Electric Co-op Board Chair Dean Tesch. CFC’s support for the project fits the organizations’s values of social responsibility and caring for others. 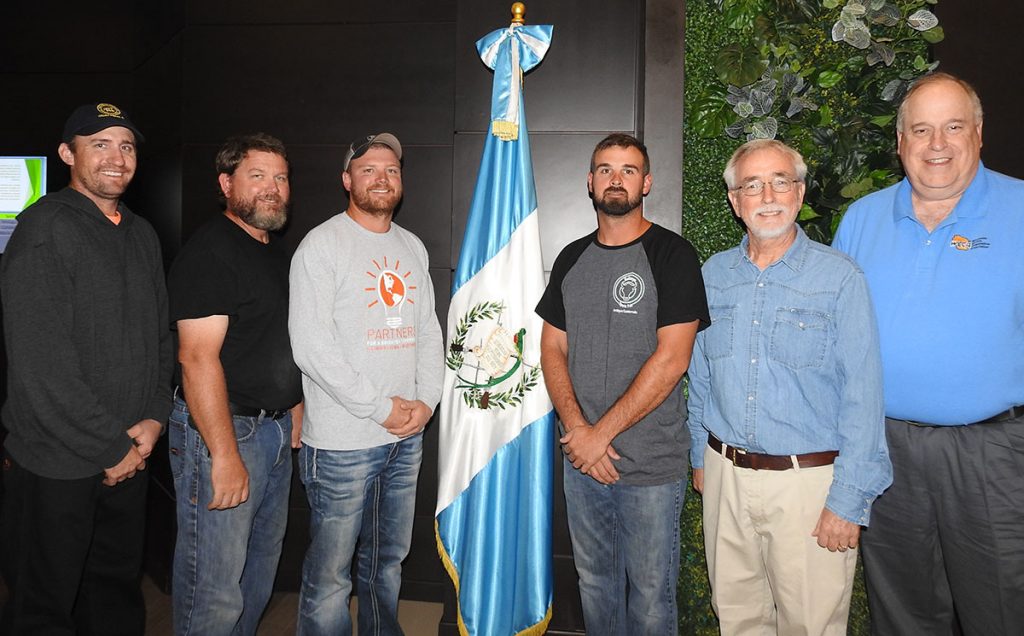 Miller snapped thousands of photos, each a testament to the humanity demonstrated by four Wisconsin linemen and their brotherhood from Illinois and Iowa.

“I think everybody who goes on this trip gets more out of it than the people in Guatemala,” she said. “While they’re getting this tremendous thing, we come back with just as muchÑif not more.”

Eighteen days of scorching heat, grueling, physical labor, a rugged commute, and scarce options for food, and each of the Wisconsin linemen said they’d do it all again.

“I’d go back in a heartbeat,” said Yarbrough.—photos by Geri Miller