It was a couple of years ago when Carol Blaken, member relations manager at Jackson Electric Cooperative, was on her way to Madison for a football game with her husband when the car behind them rolled over and snapped a utility pole. The teen driver got out of the vehicle and narrowly missed contact with a live wire. When he tried to go back to the car for his cell phone, Blaken stepped in to stop him.

This driver was lucky, but the lack of knowledge about the danger of the situation left Blaken and her husband stunned. “My husband and I talked about this accident on our two-hour drive to Madison,” Blaken said. “What if the power lines fell on the vehicle? What if the driver touched the lines? So many ‘What ifs’ … the outcome could have been so much different. It could have been deadly.”
Blaken’s experience was the catalyst behind what has become the “License to Live” initiative, an educational campaign aimed at making drivers of all ages aware of the dangers of crashes involving utility lines and equipment. 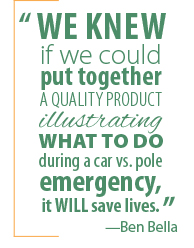 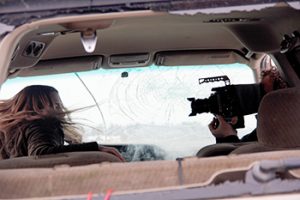 In the video, Ramon Kohnert, a veteran firefighter and EMT with Whitehall Fire Department, recalls a crash he responded to in which the victim was not so lucky. At this scene, a man crashed into a utility pole, got out of the car, and in spite of warnings from neighbors, literally tripped onto a live wire.

“When he hit those power lines, he was actually on fire,” Kohnert recalls. “His knees were on fire. His arm was on fire. There was a wire coming across his belly. It was pretty ugly.”
What happened next was even more terrifying. A young firefighter grabbed an extinguisher and ran toward the victim, while the wire was still live.
“I yelled at him,” Kohnert recalls. “I said, STOP! Put that extinguisher down and come back the same way you went in!” Had he not listened, he could have become another victim.
The “License to Live” campaign is aimed at making sure people know exactly what to do when your car comes into contact with a utility pole or wire, including: 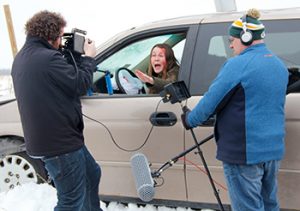 An actor shoots a scene where she tells a bystander to “stay back.”

The License to Live video also shows a reenactment that demonstrates what to do, and what not to do. “Our goal throughout this entire project has been simple—education and awareness,” said Bella. “We knew if we could put together a quality product illustrating what to do during a car vs. pole emergency, it WILL save lives.”
“I knew a project like this was important to be a part of,” said Beth Alesch, manager of communications at Riverland Energy Cooperative. “When talking to high school kids about what do to in a situation like this, it’s surprising how many don’t know what to do. If we can reach any age group with this campaign, we could possibly save lives.
I’m so happy to be a part of it.”
The cooperative representatives developed curriculum-based education materials to go along with the video. Safe Electricity, an organization of numerous utility companies focused on public safety and energy conservation education, is hosting the materials on its website.
“A big part of what we do is provide life-saving and electrical safety information to our nearly 500 cooperative, municipal, and IOU members to educate their communities, families, friends, and loved ones,” said Erin Hollinshead, executive director of Safe Electricity. “Education on electrical hazards prevents accidents and fatalities from occurring. In fact, the job of spreading electrical safety messages is never done; there is always one more person to reach.” 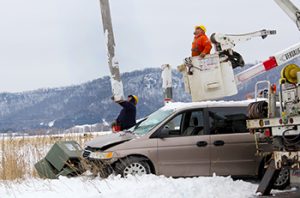 Riverland Energy Cooperative Project Manager Bill Mason and Lineman Marc Mades set the pole (and break it) to set up the scene for the safety video.

The planning committee is working to potentially get the information incorporated into driver’s education curriculum, and they are launching the educational campaign and releasing the video this month. It will be provided to all Wisconsin electric cooperatives to share with members and media.
“At Eau Claire Energy Cooperative, we too often hear of and respond to automobile accidents that involve a utility pole or transformer box,” said Monica Obrycki, chief administrative officer at Eau Claire Energy Cooperative. “Ideally, these incidents would not happen at all, but the reality is that they do. This video will help educate young drivers on what to do if this happens to them.”

“It is my hope that drivers and passengers, no matter what age, benefit from this video,” said Blaken. “And I hope the driver’s education instructors find value in teaching this very important lesson.
In spite of the dire circumstances, that victim in Kohnert’s crash survived the accident, but suffered critical injuries.
“I don’t know who was watching out for him, but he started to moan, and I remember his right shoulder coming up.” Kohnert said. The man suffered burns that required amputation of both legs—injuries that could have been prevented had he recognized the danger he was in, and made the choice to stay in his car. 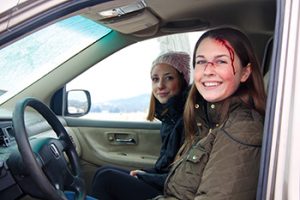 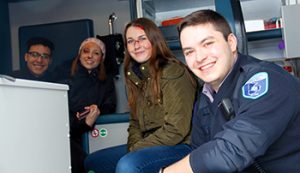 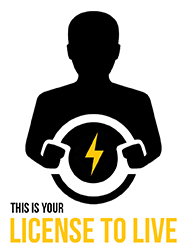 To learn more about License to Live and view the video, go to: https://safeelectricity.org/license-to-live/