Thomas Edison displayed the first strand of electric Christmas lights in 1880 outside his Menlo Park, New Jersey, laboratory. Two years later, his partner, Edward H. Johnson, hand-wired 80 red, white, and blue bulbs together and wrapped them around his Christmas tree, mounted on an a revolving motorized stand.

For more than a century, incandescent bulbs dominated holiday lighting, but in less than 20 years after their debut, light-emitting diodes (LEDs) have caught on with consumers and the way many families decorate for the holidays. 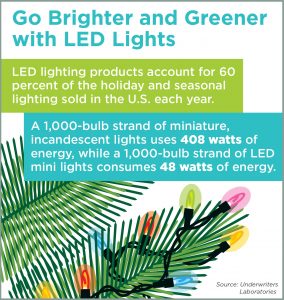 Seasonal decorations are a $12 billion annual market, which now includes consumer lighting, ornaments, inflatables, artificial trees, and table or mantle displays. LEDs are enticing consumers to buy more and to go bigger and brighter, even as they use far less energy.

“A typical 50-lamp incandescent light set can operate up to 0.170 amps or 20.4 watts. Based on this, and the requirements of the previous version of the Standard for Safety of Seasonal and Holiday Decorative Products, known in the industry as UL 588, you could only connect three strings end-to-end.”

“This was incredibly limiting,” said La Rocca. “Now, however, with the current version of UL 588, allowing connection of up to 216 watts end-to-end, and a 50-lamp LED light set that typically operates at approximately 0.020 amps or 2.4 watts, you can technically connect more than 50 strings together.”

La Rocca added that consumers should always check the caution markings attached to the strings and follow the provided instruction manual, which advises the user how many strings to connect together.

That means a 1,000-bulb string of incandescent miniatures consumes about 408 watts of energy compared to an equal LED string’s 48 watts. Since most residential circuits operate at a maximum load of 15 to 20 amps, up to three outlets might be needed for the incandescent strings to prevent overload, while the LEDs would use a single outlet.

“A consumer can connect up to 25 strings of LED mini-lights together on a single circuit,” said Dennis Krize, senior vice president of Nicolas Holiday, Inc.

The Taiwan-based firm has manufactured seasonal lighting products for more than 50 years, and has been a licensee for GE brand holiday lighting since 2000. Incandescent miniatures made their first appearances in the late 1960s, and dominated the market for decades, as costs declined.

“LED light strings may be more expensive initially, but the energy savings on some light strings will more than offset the added costs in two or three seasons,” said Krize. “Because they consume a lot less power, and the technology is constantly improving, consumers have a lot more flexibility in how they’re used and how often they decorate.”

Twinkling icicles, lighted shrubbery netting, pre-lighted trees and wreaths, and LED projection systems are among a growing list of favorites.

“Incandescent bulbs were rated to perform for up to 2,000 hours while LEDs have been designed and tested to last 20,000 hours or more,” said Krize.

While UL has not specifically tested lamps for longevity, products marked with the UL Holographic labels have undergone a series of testing related to mechanical, physical, and electrical criteria. Product tests replicating the types of stresses caused by wind, moisture, and rough handling are also conducted on samples.

“These products are designed to last a lot longer,” said UL’s La Rocca. He added that white or multicolored lights used during the holiday season might reappear in green around St. Patrick’s Day, or be moved to the patio for summer entertaining. Decorative lighting is not for just Christmas anymore!

“I cannot say that an LED lighting string will last longer than an incandescent lighting string, but I can tell you that a lighting string provided with the ENERGY STAR® logo must come with a specified warranty backed by the manufacturer. Those marked with ENERGY STAR® labels are replaceable within a designated period,” said La Rocca. He added that because LEDs produce little or no heat, the temperature concerns may be reduced; however, the consumer should always look for the UL logo on seasonal and holiday lighting to be sure that the products were tested by UL.

Although UL 588 is a voluntary standard, the U.S. Consumer Product Safety Commission requires that manufacturers of seasonal lighting products meet the specific sections described in UL 588, the Standard for Safety of Seasonal and Holiday Decorative Products.

“Even though the majority of the products covered by UL 588 are considered to be for temporary use, in many cases the requirements are more stringent than other products that are for use all year,” La Rocca added.