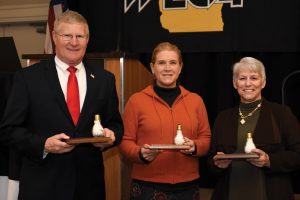 The number of nuclear plants operating in the United States continues to decline, but the volume of emission-free electricity produced by the remaining fleet increased last year compared with the previous annual high.

The EIA noted that the slightly lesser amount produced eight years ago came from a somewhat larger fleet of generators and attributed the growing output from a shrinking fleet to several factors.

A number of plants have been modified to increase generating capacity, with thermal power “uprates” boosting available generation by 2.0 gigawatts between 2010 and 2018, the EIA said. Meanwhile, refueling time has been reduced, increasing operational time.

Uprates, reduced outage time, and other efficiency improvements led U.S. nuclear generation to a remarkably high “capacity factor” of 92.6 percent for 2018, the highest on record, the EIA said. Capacity factor is the industry term for the percentage of any given time period during which a generation facility can be expected to yield its theoretical maximum energy output.

The same report cautioned that last year’s peak generation is “not likely to be surpassed in the coming decades” and the data suggests it may never be seen again. The report cited expectations of two new units coming on line by the end of 2022, adding 2.2 gigawatts of capacity. That will be wiped out by the loss of 10.5 gigawatts to the planned closure of 12 reactors by 2025, the EIA said.

In addition to early retirements scheduled for two units in 2019, the EIA said it expects three more in 2020, and another four in 2021.

The agreement is with Ranger Power, a Brooklyn, New York-based solar developer that says it’s proposing to build the project on approximately 1,000 acres of land in the Jefferson County townships of Jefferson and Oakland.

The agreement provides for Dairyland to take the entire output of the planned solar photovoltaic facility. Information released by the La Crosse-based generation and transmission cooperative said the Badger State Solar Project would generate enough energy to power more than 20,000 homes, and pollinator habitat would be incorporated in the site design.

Assuming local government regulatory approval, construction of the project is expected to begin next year, and commercial operation is anticipated in 2022.

Legislation that would save money for charities and non-profit business including local electric cooperatives cleared the House Ways and Means Committee on a unanimous vote in April.

Electric co-ops are now treated as small employers, but several hundred of them participate in the nationwide pension program administered by the National Rural Electric Cooperative Association (NRECA). “Because of the strength of our network, electric co-op retirement plans pose little risk of default,” Wisconsin Electric Cooperative Association CEO Steve Freese explained, “yet we are required to pay insurance premiums as if we are a high-risk venture.”

Overpayment on pension premiums takes money away from the co-ops’ core mission, Freese said, adding that Kind’s proposals would save Wisconsin co-ops in the NRECA pension plan more than $700,000 this year.