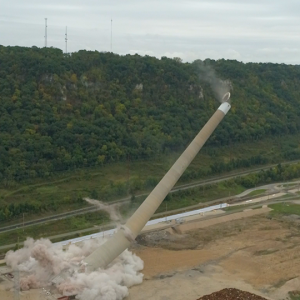 The last recognizable component of a 70-year-old coal-fired power plant has been demolished as decommissioning of the original five units at Dairyland Power Cooperative’s Alma Station moves toward completion.

The 700-foot smokestack on the Buffalo County bank of the Mississippi River was brought down by a controlled dynamite explosion October 1. Dairyland retired three of the five small coal-burning units in 2011 and the final two in 2014. The cooperative’s John P. Madgett generating station continues operations at the Alma site.

A mandate issued by California energy regulators this spring has prompted economic analysis that shows community solar options available to members of many electric cooperatives offer consumers a better deal.
The California Energy Commission decreed that all new homes built in California after 2020 must be equipped with solar panels. The commission claims the mandate will add about $9,500 to the cost of a new home but buyers will save $19,000 in energy and maintenance costs over 30 years, partly by cashing in on the state’s net metering program.

But in a Wall Street Journal op-ed this summer, Duke University economist Steven Sexton said the California commissioners “cooked the books” to arrive at those numbers. He cited figures from the Lawrence Berkeley National Laboratory in arguing that the cost per watt of the mandated systems will be almost twice what the commission claims.

Sexton wrote that under California’s “regressive” net metering policy, residential solar generators are paid as much as eight times wholesale market rates for their surplus output, shifting power costs from solar owners to comparatively less wealthy non-solar households, a policy that’s to be revisited next year.

He added that “economies of scale allow large-scale solar farms to generate twice the electricity of the solar mandate at the same cost.”

“Inefficient but subsidized rooftop solar limits the market for utility-scale solar by depressing the wholesale prices big generators receive,” Sexton wrote, adding that “even community arrays atop schools and parking lots would be less costly than the commission’s mandate.”

The only new nuclear power plant under construction in the U.S. got a new lease on life this fall as Georgia Power, the generation and transmission cooperative Oglethorpe Power, and two Georgia municipal utility organizations voted to continue a two-unit expansion at an existing nuclear plant site near Augusta.
The project was five years behind schedule and $13 billion over budget. The Department of Energy urged the partners to finish construction, saying it would otherwise move to recover more than $5 billion in federal loans previously paid out.