Most people have been in Michelle Piper’s shoes before—rushing to get somewhere, 8 million things on your mind, and in your haste, you misplace something of value. In Michelle’s case, the “something of value” was her purse that she left on the roof of her car!

A new Rock Energy member in the Rockton area, Michelle didn’t realize, of course, she had left her purse on top of her car before she took off down the road in the late morning hours on Oct. 15. A couple miles down the road, her purse eventually fell off the car roof. Yep, there it sat, in the middle of the street. Until, that is, a REC employee passed by. What happens next… well, we’ll let Michelle explain! See the note below that Michelle sent REC about the entire situation.

NOTE TO REC FROM MEMBER MICHELLE:

“I had just recently moved into my new home in Rockton. On Oct. 15 I was working in the yard all morning trying to get the outside work done before the big “freeze” the next day and I was exhausted. All I can say is, I had a lot on my mind! 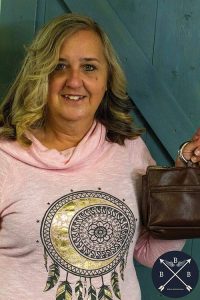 I was loading items in my car to take to a friend in Roscoe. While doing so I set my purse on top of the roof of the car. Without realizing the purse was still on the car, I simply drove off. For some reason, as I was a few miles away, I had this sinking feeling about my purse, so I looked on the passenger seat where I always put it, and it wasn’t there. Of course, I panicked and pulled over and checked the entire car as I immediately knew what I did. I turned around and started searching my route for my purse with no luck. I was hoping that maybe I left it in my garage or the house, and not on the car roof.

Once I got home I spent several minutes searching for my purse. It was then I knew I was in trouble. My first thought—PRAY that someone found it. I called the Rockton Police Department to see if someone had turn it in. At that time, no one had brought it in, so they were going to send someone out to file a report. Within five minutes of hanging up, however, I received a call from the police station. They said that someone from Rock Energy had found my purse in the road in front of Hononegah High School as the students were being dismissed. From what I understand, the Rock Energy employee pulled over, gathered all the items from the purse (while directing traffic), and turned it in to the police without leaving a name except that he was from Rock Energy Co-op! 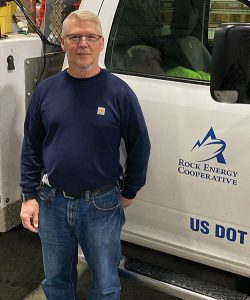 More often than not, common kindness goes unnoticed, so I wanted to let this gentleman know how much I appreciated what he had done. I called Rock Energy with the slim hope that someone could connect me with the person who found my purse so I could give them some type of reward. On Friday morning, I received a call back from a gentleman named Cal Calkins who told me he was the one who found my purse. I was elated, and wanted to give him a reward, but he refused. He noted that he was “just happy to help!”

It’s a good feeling to know that there are people who genuinely help just to help, because it’s the right thing to do. Those people are rare in this day and age, and Cal is one of those people! Rock Energy is lucky to have him as an employee.”