Wait, ski jumping? Yes indeed. This rather uncommon sport—in the United States, anyway—has a cluster of active facilities in Wisconsin, thanks to the state’s high concentration of Scandinavian immigrants who brought their native pastime with them when they settled in Wisconsin from the mid-1800s through the turn of the century.

Among those facilities is the Tri-Norse Ski Club and Park in Rome, on Adams-Columbia Electric Cooperative’s lines. This facility got its name from three Norwegian men who built a 40-meter ski jump at Dyracuse Mound and founded a ski club there in 1932.

Eighty-seven years later, Tri-Norse has diversified into a multi-purpose winter recreation area, offering eight kilometers of trails for cross-country skiing, snowshoeing, and some fat-biking, with more plans in the works. However, ski jumping still reigns supreme.

“Tri-Norse is not just about ski jumping, but that’s how the hill was founded and it’s still the main focus of the club,” said Scott Dickman, president of Tri-Norse Ski Club.

A member of U.S. Ski & Snowboard (formerly known as the U.S. Ski Association) since 1937, the Tri-Norse Ski Club typically includes about six to 12 young competitive jumpers each season. The club hosts two tournaments every year. One is a fall tournament, with skiers jumping off drops outfitted with plastic carpets. The other is the club’s annual Winter Ski Jumping/Nordic Combined Tournament, held each year since the park first opened; the 87th annual event is scheduled for February 17.

For the past few years Tri-Norse has also served as the Badger State Games site for ski jumping and Nordic combined events, held concurrently with the Tri-Norse winter tournament.

Tri-Norse tournaments attract talented young jumpers from the Midwest and on up to the Canadian border. Dickman said a number of young athletes who have jumped at these events went on to have successful competitive careers; two members of the 2018 U.S. Olympic ski jumping team even jumped at Tri-Norse when they were youth jumpers.

However, Tri-Norse is not just about providing opportunities for potential Olympians. The organization has remained true to the founders’ dream of forming a club “to promote, create, develop, and sustain interest in the sport of ski jumping,” and that includes making the sport accessible to as many people as possible.

In addition to the tournaments, Tri-Norse hosts a couple of “Tri it” days each year, when anyone, regardless of age, skill level, or experience, can give the sport a go under the watchful eye of veteran ski jumpers. The next “Tri it” day is scheduled for January 3.

“Anybody can do it,” Dickman said. “We’ve had individuals try ski jumping for the first time who are in their 30s, and we’ve had them all the way down to the age of 3. No prior experience is needed. It’s just a chance for folks to come out and try to get their feet wet and decide if this is something they might like to do.”

The attempt alone brings them closer to a fairly exclusive club. Dickman said there are only about 20 active ski-jumping facilities in the entire country.

“There’s not an overwhelming amount of individuals nationwide who do it,” he said. “There’s maybe 100 active jumpers in the United States, so it’s a pretty select group.” 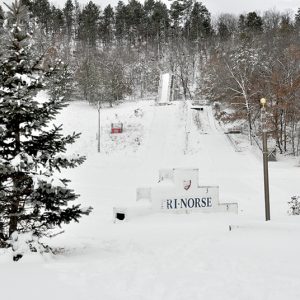 For the folks who are outside of that select group, most of what they know about ski jumping is likely what they see on TV during the Olympics every four years, which Dickman acknowledged can lead to a rather distorted view of the sport’s safety. Watching a human being fly off a 120-meter jump is not likely to convince the uninitiated that ski jumping is a safe sport to try.

However, Dickman insists ski jumping is quite safe, due in part to the way it’s taught, with skiers starting on very low jumps and working their way up.

“It’s such a graduated sport,” he pointed out. “It’s spoon-fed a little at a time. There are actually fewer injuries in ski jumping than there are in soccer, believe it or not.”

“It’s a very mental-oriented sport,” he said, explaining that if you perceive the sport to be highly dangerous, you may indeed put yourself at risk standing at the top of the drop. “If you can get past that mental block it’s a completely safe sport,” he added.

Tri-Norse has four jumps, ranging from the 5-meter pee-wee jump to the more advanced 55-meter jump. Dickman said most ski jumpers enter the sport between the ages of 6 and 9 and advance to the 55-meter hill after about six or seven years of training. Those who keep progressing and have an interest in continuing beyond what Tri-Norse can offer typically spend their summers at training facilities in Lake Placid, New York, or Park City, Utah, which have year-round staffing and bigger jumps, he added. 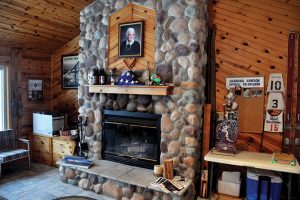 A heated lodge on site has a stone fireplace, bathrooms, a kitchen and concession area, plenty of seating, plus displays showcasing Tri-Norse’s rich history. At left is a display honoring Ingvar “Ole” Arneson, an Olympic ski jumper and one of the ski club’s founders.

In its long history, the Tri-Norse Ski Club has had one Olympian—founder Ingvar “Ole” Arneson, once dubbed “the Soaring Scandinavian” by the Chicago Tribune. Arneson was the Norwegian national boys champion in 1919 before relocating to the United States in 1924 at age 18. He earned a place on the 1940 U.S. Olympic ski team, but the Olympics were canceled that year due to World War II so he didn’t get to compete.

In the years since, Dickman said a couple former Tri-Norse club members have been named Olympic alternates, and others have gone on to compete at the national level.

Many others have had encounters with Olympic athletes through Tri-Norse experiences. Four Olympians served on the coaching staff at a youth ski-jumping camp Tri-Norse hosted last summer. And it’s always possible that one of the skilled young skiers jumping at a Tri-Norse tournament will one day stand on the Olympic podium. 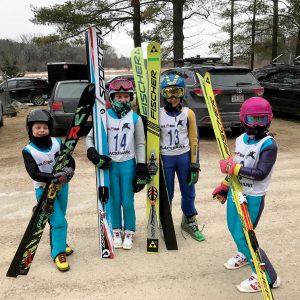 You never know if there’s a future Olympian among the youngsters who practice ski-jumping at Tri-Norse!

Tri-Norse is looking to the future in more ways than preparing future champions. The club is in the midst of a strategic plan to continue developing the park as a winter recreation area. With a heated lodge equipped with a kitchen, restroom facilities, and a cozy fireplace already in place and a wooded ridgetop offering spectacular views, the area is ideally suited for a variety of winter activities.

Recently, a tow rope was installed, and work is underway to develop a portion of the hill between two of the jumps as a learn-to-ski area. Plans also call for a skating rink to be added. A long-term goal is to add snowmakers so the facility doesn’t have to depend solely on Mother Nature.

However the future unfolds for Tri-Norse, one thing is almost certain—the park will continue to help keep Wisconsin a hotbed of American ski jumping.—Mary Erickson