More than one veteran political analyst has said rural Wisconsin swing voters played an outsized role in deciding the 2016 presidential election—and nobody saw it coming. If it happens again in 2020, everyone will have seen it coming.

That was clear enough from a New York Times headline the first week in April proclaiming, “Wisconsin, Ground Zero for 2020 Politics, Looks Like a Tossup Again.”

The article sees hair-thin margins favoring opposite sides in two recent elections—the governor’s race last November and April’s state Supreme Court contest—supporting the “tossup” theory that Wisconsin’s political identity is “very much in flux.” But just three paragraphs later, its own citation of 21st century history might have alerted the Times to the possibility that being “in flux” is the natural state of Wisconsin politics. In the three closest recent presidential elections, the Times noted without apparently grasping the significance, Wisconsin was won by the narrowest margins of any state: less than one percentage point in 2000, 2004, and 2016. 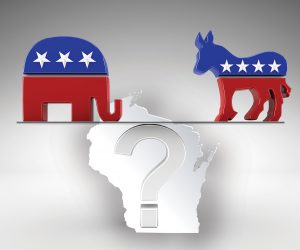 Flux is a Feature

The perennial competitiveness of Wisconsin politics is almost continuously on display but will be even more so next year when the 2020 Democratic National Convention comes to Milwaukee.

David Wasserman, senior analyst with election guru Charlie Cook’s Cook Political Report, told this spring’s National Rural Electric Cooperative Association annual meeting the run-up to the Milwaukee convention—a potential demonstration of unity among Democrats eager to take on Donald Trump—could also break the opposite way if a battle for their nomination is still on.

But nothing spotlights Wisconsin’s importance more than its selection as the convention venue.
Something to watch for in Milwaukee may be the nomination of a second consecutive female candidate. A noteworthy datum Wasserman gleaned from last year’s midterms is that in 70 percent of Democratic congressional primaries where the choice was available, the party’s voters picked a woman over a man. One result is that 53 of this year’s 62 first-term congressional Democrats are women.

For this crucial state, the 2018 results may have provided a meaningful forecast for Democrats running in 2020. Last year brought “an enormously high-turnout midterm election,” Wasserman said, noting it was the first time in 104 years that a majority of eligible voters made the effort to show up at the polls in a non-presidential year—and in Wisconsin it brought the defeat of a two-term Republican governor.

Whether that spells trouble here for Donald Trump is uncertain: Wasserman noted that last year Democrats in the 62 most competitive congressional districts focused their messages not on opposing Trump, but on health care issues.

Wasserman’s talk contained echoes of Craig Gilbert, Washington bureau chief of the Milwaukee Journal Sentinel, in a presentation at a February 2018 gathering of the Wisconsin Electric Cooperative Association.

This spring, Wasserman noted that a possible path to re-election for Trump might ironically be the same one trodden by Barack Obama: a victory fueled by blue-collar voters in the upper Midwest, alienated from what they see as an uncaring political establishment.

Not to be Ignored

Ugly as today’s political environment may be, nobody seeking national office in 2020 can afford to dismiss the possibility that Midwesterners are onto something. We engage, because we understand that political decisions have practical effects.

The idea of a state being politically competitive may strike The New York Times and other coastal media as an aberration, but Wisconsin politics staying competitive—having been that way for quite some time—is not especially mysterious. Living in a place with strong political competition isn’t always easy and at times is downright unpleasant. But a lot of history shows it’s better than the alternative.—Dave Hoopman