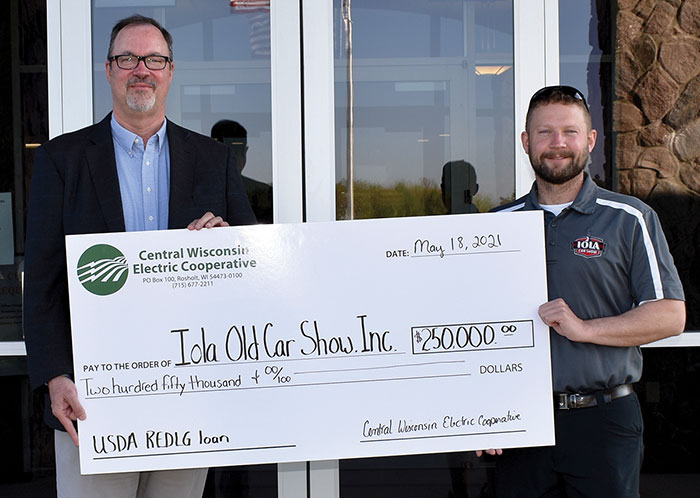 The loan provided by USDA was obtained through Central Wisconsin Electric Cooperative (CWEC), and will be used by Iola Old Car Show for projects that will create and retain employment. Iola Old Car Show will repay the loan to CWEC, which will then be responsible for repayment to USDA.

Joe Opperman, executive director for Iola Old Car Show, said the loan will help the organization prepare for this year’s car show, after lost revenue due to the Iola Old Car Show being cancelled last year. It was the first time the show had ever been cancelled since it first began in 1972.

“We could have maybe tried to penny-pinch and skimp by to prepare for this year’s show without it, but we would not have been doing justice to the work that needs to be done, and we would have really been cutting corners,” Opperman said. “So, this was imperative to putting together the right show.”

“One of the cooperative principles that is especially meaningful to us is Concern for Community,” said Mike Wade, president & CEO of CWEC. “In addition to being an energy provider, the co-op strives to be a strong community partner throughout its service area. Our board of directors understood the challenges faced by the community during the pandemic and they were eager to provide assistance through an economic development loan from the USDA.”

Opperman said 2020 was “very difficult” because of COVID, and other than obtaining the loan, Iola Old Car Show did several different things to navigate through the year.

“We were very fortunate to get some help from the PPP (Paycheck Protection Program), as well as a state grant,” Opperman said. “We did some minor fundraisers ourselves, but it was really an all-of-the-above approach we needed to do. We needed to save money anywhere we could. We needed all of these lifelines in order to make it through and maintain the business.

“We could have shut everything down and done nothing, and tried to restart, but we wouldn’t have been very well posi-tioned for executing a show this year.”

With all the steps taken by the organization to ensure a show in 2021, Opperman is excited about the upcoming show July 8–10. This year will be the 49th edition of the show.

“We’ve gotten a tremendous response, as have most events this year because people are anxious to get back to normal activities, back outside,” Opperman said. “They really are not taking for granted the things that they were not able to do last year.”

He added that reservations for camping, attendance, and vending have been strong.

“We’ve always got some excite-ment at this time of year, but I think it’s safe to say we’ve never had this type of positive (excitement) leading up to the show,” Opperman said.

The response from show volun-teers has also been positive.

“We were not sure what the vol-unteer pulse would be leading up to this year’s show,” Opperman said.

“We’ve been very happy to see the groundswell of support and assistance and positive help leading up to it. We’re thrilled to have that support.”

Opperman said he is thankful for CWEC’s help in obtaining the USDA loan, to help ensure this year’s Iola Old Car Show is the best it can be.

“I really value the partnership we have with the co-op (CWEC),” Opperman said. “This is one of many examples of ways we’ve been able to work together for the betterment of the community.”

Wade added, “Not only does the Iola Car Show have one of the largest auto events in the U.S., it helps local community groups raise needed financial support. The Iola Car Show is an amazing organization and we are proud to help them secure this USDA loan.”