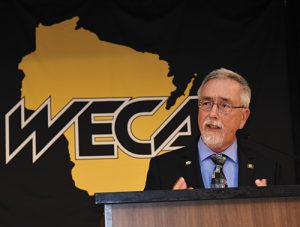 The electric utility industry lost a beacon of light and respected leader when Dean Tesch, 58, lost his battle with cancer. Tesch died on Saturday, October 31, at his residence in Stetsonville.

“Dean Tesch was a respected leader and an asset to electric cooperatives in the state and the nation,” said Steve Freese, president and CEO of the Wisconsin Electric Cooperative Association (WECA). “His industry knowledge, integrity, and commitment to community are unmatched and he will be greatly missed. Our thoughts and prayers are with all of Dean’s family members, friends, and colleagues.

Tesch is survived by his wife of 36 years, Debra, his father, and extended family members.

In lieu of flowers, the family will accept memorial contributions for the establishment of a Dean Tesch Charitable Fund.

The Wisconsin Electric Cooperative Association shifted to a hybrid format for the 84th annual meeting in November, with a very limited number of staff and some WECA board members in attendance. Most participants attended virtually. Board leadership announced the statewide is in good financial shape, in spite of the pandemic, which caused the cancellation of many programs.

David Hischke was re-elected to the board to represent District 4. There were no nominations for the open District 3 seat, so the board will work to fill that position with an appointee.

WECA President and CEO Steve Freese presented outgoing WECA Board Chairperson Diane Zimmerman with the Director’s Award and thanked her for her service following two terms on the board.

The Federated Youth Foundation (FYF) held its annual meeting prior to the WECA annual meeting. Executive Director Ethan Giebel announce positive financial news, including a record $901,317 in scholarships and charitable giving, in addition to $310,000 returned to co-op members. 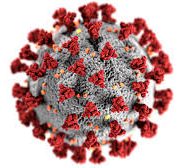 The Wisconsin Electric Cooperative Association has submitted public comments to the State Disaster Medical Advisory Committee, Vaccine Subcommittee, which is developing the state’s COVID-19 Vaccination Plan to determine how to prioritize disbursement of the vaccine, once it is available.

In the written remarks, WECA President and CEO Steve Freese urged the committee to give electric cooperative workers appropriate priority in the plan, as their work is essential in keeping the power on for healthcare clinics, care facilities, communications providers, first response centers, and many other critical-need service entities. 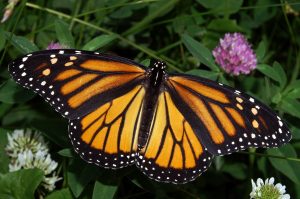 East Central Energy is the first electric co-op to be to be granted a permit by the U.S. Fish and Wildlife Service to enter a conservation agreement to protect the monarch butterfly. This designation means the co-op will already be in compliance should the monarch butterfly be designated as an endangered species later this year, and has some protection against potential enforcement actions.

East Central Energy is replacing turf grass with native prairie foliage around its substations, which will support the monarch butterfly and also reduce maintenance costs for the co-op.

The co-op’s permit recognizes the co-op’s 15-year-old integrated vegetation management program, which is a mix of seasonal mowing and herbicide application in rights-of-way and other utility properties. The program encourages the growth of flowers and foliage vital to the monarch butterfly’s lifecycle.

The U.S. Fish and Wildlife Service is expected to announce in December whether the monarch butterfly should be listed under the Endangered Species Act. A final listing decision would come by the end of 2021.

The Wisconsin Public Service Commission (PSC) is seeking applications for $7 million in energy innovation grants. Businesses, schools, governments, manufacturers, hospitals, and nonprofit organizations, as well as schools, public utilities, municipal and tribal governments, and other organizations are eligible to apply for the grant money to fund energy-related projects.

The commission created the grant program several years ago using funds from the 2009 federal recovery act. The program is intended to incentivize projects that reduce energy consumption, increase the use of clean energy or alternative transportation technologies, or increase energy resilience.

Application instructions are available at the Office of Energy Innovation.