If that old smoke detector, discolored, stained with paint or years of household grime, could send you a message silently, it might say “please replace me.” Those life-saving warning devices designed to alert us to smoke and fire were never meant to last forever. 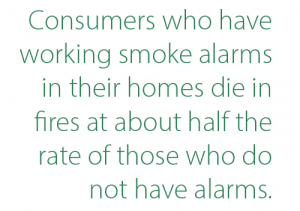 “After 10 years, there would a potential of a 30% failure rate,” said Nye, who also cited a CPSC recommendation that consumers look for smoke alarms rated or certified by Underwriters Laboratories and designated by the symbol “UL” or the Electrical Testing Laboratories, marked with the “ETL” logo.

“Once they start to reach their end of life, consumers may notice alarm signals—typically a chirping sound that is either a low battery or an indication of the device’s end of life, meaning that it’s time the unit was replaced,” said Mahoney. 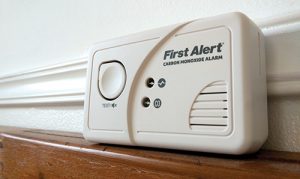 The NFPA not only recommends that batteries be replaced once a year, but also urges you to test the unit once a month as an added precaution against failure. Chirping, prompted by a drained battery will typically stop within seven days and when that happens, the unit stops functioning.

“If you’re just waiting to hear the sound and not testing regularly, there’s a possibility that you’re going to miss that, especially if you have battery-only systems,” Mahoney said. 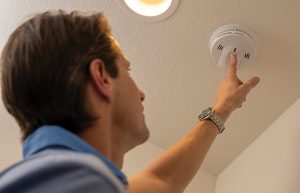 The National Fire Protection Association recommends that a working smoke detector be installed in every bedroom, on every level of a home, and in hallways outside of sleeping areas. Photo courtesy of Scott Van Osdol

Design improvements are another great reason to consider replacement of older units. Ionization smoke alarms made their debut in the consumer market in 1970. Photoelectric smoke detectors were first patented in 1972, and the first 10-year lithium battery-powered smoke alarms hit the market in 1995. Since then, units using the best features of all three technologies have become popular.

Many states have upgraded building codes to require hardwired smoke alarms with battery backup, and carbon monoxide detectors in all new residential construction.

As fire codes have evolved to require smoke alarms in close proximity to cooking appliances, manufacturers have improved the technology, said NFPA’s Mahoney. “They can distinguish between an actual fire event in the home and cooking fumes, reducing the incidence of nuisance alarms.”

Features for residential alarms and detectors are also available to enhance the safety of the hearing impaired, said Nye, adding that those include bed shakers and strobe lights offering another level of alert to fire or carbon monoxide danger.

Half of all home fires occur in December, January, and February. But did you know that instances of carbon monoxide poisoning also increase during the winter months? According to the Centers for Disease Control and Prevention, 430 people die each year in the United States from accidental CO poisoning, and another 50,000 require emergency room visits.