A new natural gas plant would reduce overall emissions and open the door for more wind and solar generation. So why is it stalled?

On a brisk fall day in October, the sounds of change echoed through Vernon County as Dairyland Power Cooperative demolished some outer buildings of the Genoa #3 coal plant, which was retired in June 2021, reducing them to rubble. The demolition solidified the generation and transmission co-op’s commitment to cleaner energy and a diverse portfolio that includes more wind and solar. To ensure reliability, Dairyland is partnering with Basin Electric Power Cooperative and Minnesota Power to build a $700 million, 625-megawatt “renewable enabling” combined-cycle natural gas facility plant near Superior.

“Nemadji Trail will be the most efficient natural gas plant in the upper Midwest,” said John Carr, vice president of strategic growth at Dairyland.

The project has been in the works since 2014 as part of strategic planning to accommodate the expansion of renewables without risking reliability. The big picture, according to Carr, is that the Nemadji Trail Energy Center will drive emissions down by displacing coal and less-efficient natural gas generation.

“If wind and solar resources are adequate at the time to meet demand, Nemadji Trail goes off-line, and it sits there and waits until the point in time when we don’t have enough wind or solar energy, but electric demand is still there,” Carr explained. “Then the plant can be brought on line quickly to meet that demand. It is renewable enabling. It allows us to use those intermittent resources and also fill in the gaps to make sure that reliability in the upper Midwest is not compromised.” In addition, Carr says the plant will be able to burn up to 30% hydrogen, reducing emissions further.

The complex process of getting approval to build a new power plant includes layers of state and federal reviews. Nevertheless, the Minnesota Public Utilities Commission approved the project in 2019 and the Public Service Commission of Wisconsin issued its approval of the project by granting a Certificate of Public Convenience and Necessity (CPCN) in 2020.

“One of the requirements of the process is the project is subject to what’s called the ‘energy priority law,’ which looks at whether you can meet the demand with energy efficiency, renewable energy, or zero-emmisions resources instead of building the plant. The states that approved this project looked at all of that, and they agreed that no, you cannot,” Carr said. “They concurred that the project is necessary to ensure reliable electricity.” 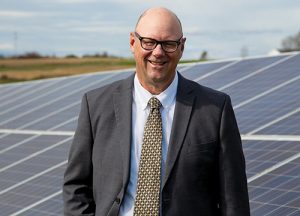 The permitting process continued at the federal level, where the Rural Utilities Service (RUS), which approves funding for rural infrastructure projects, conducted a National Environmental Policy Act (NEPA) review of the project. In June of 2021, the RUS issued a “Finding of No Significant Impact” (FONSI) ) indicating that the proposed project would not have a significant effect on the quality of the human environment. With the major hurdles cleared, Nemadji Trail was moving forward. Until it wasn’t.

The Sierra Club and other environmental groups challenged the project at every turn, arguing it is “both unnecessary and harmful to efforts to curb the climate crisis.”

The groups petitioned the RUS to rescind the FONSI and draft a Supplemental Environmental Assessment (SEA) to further explore the greenhouse gas emissions and climate change impacts of the project. The RUS agreed to the additional review and the SEA was published for public comment during the summer of 2022. Since then, nothing. Today, Dairyland and its partners are still waiting for a decision to move forward.

“At this point in time, the project, in my own words, appears stuck,” Carr said. “What is interesting is that nothing has changed since the finding of no significant impact. So we’re a little puzzled by it. We do believe that we went through all of the steps necessary. The record is very thorough, and it supports proceeding and issuing a finding of no significant impact, but we’re awaiting that before we can move ahead.”

The project is center to a global debate amid the urgency to reduce emissions and the role natural gas should play. Coal contributes the most CO2, but it is highly reliable. Wind and solar generation are
emissions-free, but they are intermittent resources and cannot consistently meet the electric demand. Natural gas is significantly cleaner than coal, but some still say that’s not good enough.

“While burning coal continues to be the most environmentally dangerous source of electricity, burning fracked gas is not a source of ‘clean’ energy, especially when compared to renewable sources like wind or solar. When both carbon and methane emissions are considered, the latest science shows that the build-out of gas infrastructure will prevent us from reducing greenhouse gas emissions enough to avoid the worst impacts of climate change,” The Sierra Club said in a release.

The consequences of a greater dependence on intermittent resources are already apparent in Wisconsin and across the nation. This past spring, Midcontinent Independent System Operator (MISO), the grid operator which directs the flow of electricity among 15 states, including Wisconsin and part of Canada, issued a historic alert, saying the region was at risk of rolling blackouts. Stepping outside its neutral stance on the source of generation, a MISO representative spoke out in support of the Nemadji Trail project, saying, “natural gas must be in the mix.”

In response to MISO’s warning about blackouts due to the expansion of intermittent resources, two investor-owned utilities in Wisconsin decided to delay the planned closing of coal plants.

Carr pointed to real-time data from MISO which shows that even on a mild, windy fall day, 52% of the demand across the central part of the United States was being met with fossil fuels.

“So how do we get to zero fossil fuel use in five years? Or ten years? Wind and solar won’t be enough to do it alone. So we think that highly efficient combined-cycle natural gas that can be there when those resources can’t, just makes sense,” he said.

Complicating the delay in the permitting process for Nemadji Trail was navigating it during COVID and staff turnover at RUS. President Joe Biden appointed a new RUS administrator, Andrew Berke, who took over in early October 2022.

“We have the opportunity to meet the same goals that the people trying to block this project have, and that is to reduce overall emissions,” Carr said. “We are aligned with them. This project helps us reduce greenhouse gas emissions in this part of the world. It gives us the ability to add more intermittent renewables. This plant does not displace or prevent wind or solar from coming in; it actually enables it.”

Carr says Dairyland is still hopeful the approval will come through, and construction of Nemadji Trail can begin in April 2023, bringing with it up to 260 construction jobs and infusing much-needed revenue in the state and local area.

“It would be a real shame,” Carr said.

Because the demand for electricity will remain. And the Genoa #3 plant will still be gone.—Julie Lund