If you ever want to see one of the biggest changes going on in the world today, look around your home. Your smartphone, video game, security camera, fitness bracelet, thermostat, and even your TV could be part of a vast, interconnected group of devices that goes by the clunky name of the Internet of Things.

The term refers to anything connected to the internet, which covers a lot of gadgets, and will soon be covering even more. Today, you can purchase light bulbs that dim with the sound of your voice or from the press of a button on your smartphone. You can start your car remotely. A 2014 report by the investment firm Goldman Sachs predicted the number of internet-connected devices could grow 10 times by 2020, to as many as 28 billion “things.”

While this growth may seem like the latest trend, it was recognized more than 30 years ago. Credit for naming it has gone to Peter T. Lewis, co-founder of Cellular One. In a 1985 speech he said, “The Internet of Things, or IoT, is the integration of people, processes and technology with connectable devices and sensors to enable remote monitoring status, manipulation, and evaluation of trends of such devices.”

In other words, the rapid rise in the number of internet-connected devices has been building for decades, says Tim Heidel, deputy chief scientist with the National Rural Electric Cooperative Association (NRECA).

“The Internet of Things is the latest buzzword that reflects a long-term trend,” says Heidel. “Ten years ago, you may have had six or eight or 10 devices on the wireless router in your home. Now, that number can go as high as 25 or 30 devices.”

Heidel credits lower costs with ramping up this high-tech revolution that can make life more convenient, and even increase energy efficiency with new ways to control heating, cooling, lighting, and other uses of electricity.

“The cost of including communications in the devices has come down dramatically. Twenty years ago, you could only afford an ethernet port or Wi-Fi in a computer,” says Heidel. “Now, we’re getting to the point where it costs literally only pennies to include that capability in any device imaginable.”

Heidel continues, “So what’s changing here is the number of devices. Once you have a critical mass of all the places that are capable of communicating, they can then start communicating with each other. All of this promises convenience and services, but in the pursuit of extremely low costs, sometimes there’s the opportunity to cut corners on security.”

A stunning example of security problems with the Internet of Things happened last October when hackers crashed dozens of websites in the United States for most of a day, including well-known names like Netflix and Twitter. Incredible as it seems, that attack may have been aided by a device in your own home.

Here’s what happened Friday, October 21: Hackers had already scanned the world for devices vulnerable to infection by malicious software that allowed them to take control of hundreds of thousands of home routers, baby monitors, printers, and network-enabled cameras. Using that “botnet,” the hackers flooded web sites with so many messages the sites shut down for several hours in what is called a “Denial of Service” attack. 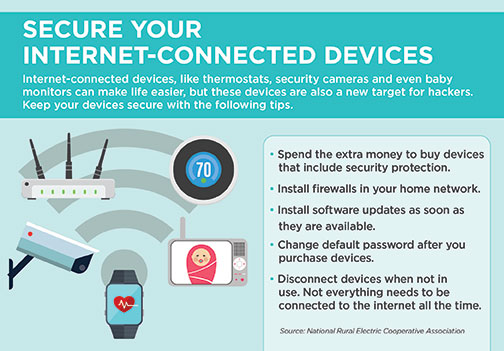 There are ways you can reduce your risk from hackers hijacking your internet-connected devices, says Cynthia Hsu, cyber security program manager with NRECA.

Hsu cautions, “The criminal element is rapidly escalating the innovation of new ways of attack. If you have a router for wireless internet in your home,” Hsu says, “make sure you patch your router’s software whenever security updates are available so it’s protected as new vulnerabilities are discovered.”