If the chilly temperatures of the season have you searching for a hot place to visit, you should consider a trip to Hudson February 7–9, when the skies will be filled with hot air from as many as 30 bright balloons.

The annual Hudson Hot Air Affair, billed as the premier winter ballooning event and winter festival in the Midwest, is a weekend of family-friendly activities, both indoor and outdoor. Highlights include a Friday evening Torchlight Parade featuring the balloon baskets that are steered down Hudson’s Main Street with the burners shooting bright flames into the night sky. Weather permitting, a Saturday morning group launch of all participating hot air balloons creates a colorful collage that’s a sight to behold. 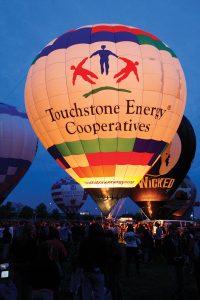 “This is the first year an official Touchstone Energy balloon is going to be at the Hudson Hot Air Affair,” said Michele DeLong, communications & events coordinator at SCEC.

In addition to sponsoring the Touchstone Energy balloon, SCEC is once again sponsoring the Living with Dementia balloon in a partnership with the St. Croix County Aging & Disability Resource Center (ADRC), forged through the co-op’s FirstCall Medical Monitoring Service.

SCEC is also listed as an event sponsor, thanks in part, DeLong said, to efforts with Big Guys BBQ Roadhouse, a restaurant on SCEC lines that hosted the CountDown Event & Kick-Off Fundraiser in January. Big Guys will also host the Big Chili Blowout on February 9 that closes the Hot Air Affair festivities. 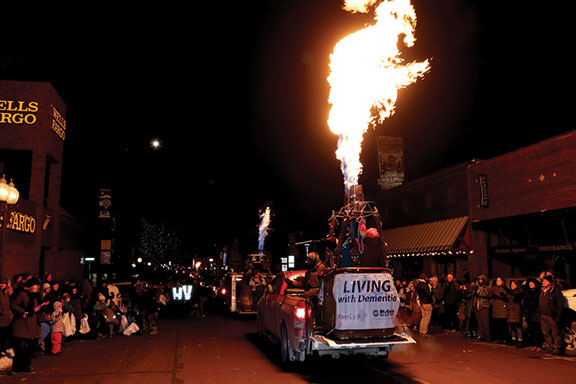 Hundreds of spectators line the main street of Hudson the first Friday in February each year for the Hudson Hot Air Affair Torchlight Parade. For five years, St. Croix Electric Cooperative, through its FirstCall Medical Monitoring service, has sponsored the Living with Dementia Balloon in partnership with the ADRC of St. Croix County.

Electric co-op ties to the Hudson Hot Air Affair are varied and also longstanding. At the 2003 event, SCEC sponsored an unofficial Touchstone Energy balloon jointly with neighboring Pierce Pepin Cooperative Services. That balloon was owned and piloted by Keith Wohlfert, former communications coordinator at Adams- Columbia Electric Cooperative. Wohlfert would sometimes affix the Touchstone Energy logo to his own hot air balloon and participate in community events such as the Hudson Hot Air Affair.

Five years ago, the dementia specialist at the St. Croix County ADRC office approached SCEC with the idea of sponsoring a balloon at the Hudson Hot Air Affair to fulfill the wish of a local resident with dementia who wanted to ride in a hot air balloon. The two entities joined forces and have been sponsoring the Living With Dementia balloon ever since, using the event to help promote the need for services for community members with dementia as well as their caregivers. This year, the St. Croix Valley Dementia Friendly Communities Coalition became part of the Living With Dementia balloon sponsorship team. 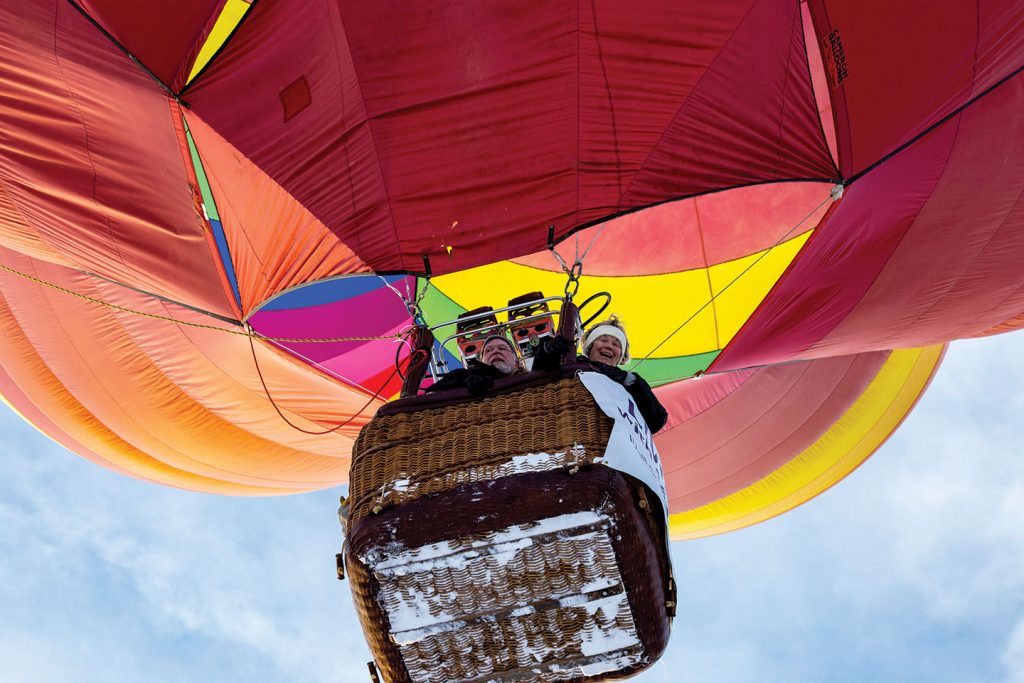 “Every year a person with dementia and their caregiver are designated as ambassadors,” DeLong said. “They share their story and they have the potential to ride in the balloon.” 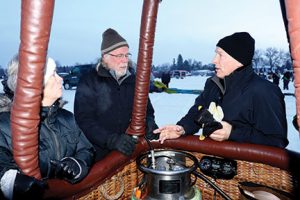 Pilot Terry Dorshorst of West Salem does a pre-flight briefing with passengers Abrahamson and Levy before the Saturday morning mass launch.

The co-op’s involvement with the Hot Air Affair means a number of employees serve as volunteers, whether by serving as the balloon’s ground crew during launch and landing, or passing out giveaways along the parade route. DeLong herself has been actively involved with the Hot Air Affair since she joined the staff at SCEC two years ago. She was only one week into her new job when she was immersed in the 2018 event.

“I had never been to Hot Air Affair despite living here for 25 years,” she said. “I went to the parade that year, had a blast, and volunteered to be on the committee. This year I thought it would be fun to get the Touchstone Energy balloon here.”

While weather is always an unpredictable factor at any ballooning event, the Hudson Hot Air Affair offers plenty of opportunities for guests to take in the balloons regardless of what Mother Nature does. When the weather cooperates, the Saturday morning group launch is a spectacular sight. A second launch is scheduled for the afternoon, in case weather prevents the sunrise group launch but clears by mid-day. If the morning launch occurs, the afternoon launch is optional for the balloon pilots.

“It’s really awesome,” said DeLong. “There’s anywhere from 30 to 50 balloons. When they are able to take off in a group launch it’s just really cool to see.” 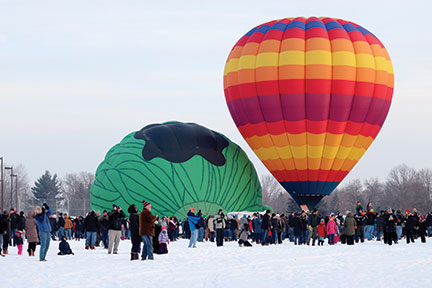 The Hudson Hot Air Affair offers several opportunities for spectators to see the balloons up close.

And if the weather is too wet or windy for the balloons to take flight, visitors can always marvel at the balloons a little closer to earth. Friday night’s Torchlight Parade is held regardless of the temperature. Although this event features only the balloons’ baskets, the whoosh of the flame from the burners as the baskets pass by thousands of visitors who gather along the parade route is a spectacle in itself. The sparks continue with a fireworks display following the parade.

On Saturday evening, the grounds are aglow with the light from the filled balloons during the popular Hot Air Balloon Moon Glow. Visitors are welcome to stroll amongst the beautiful balloons that are tethered to the ground and chat with the pilots and crew. If it’s too windy, the Moon Glow is replaced with a Field of Fire, where the baskets are lit up.

This year visitors will even find opportunities to ride in a hot air balloon. DeLong said SCEC is planning to offer tethered rides on the Touchstone Energy balloon at the co-op office on February 7. Plans also call for the Touchstone Energy balloon to be on hand at Big Guys BBQ for the Big Chili Blowout, with tethered rides a possibility there as well.

The balloons are clearly the main attraction of the Hudson Hot Air Affair, but there’s much more to see and do. DeLong describes the event as a “month-long community festival” that begins in January with a variety of activities and culminates with the Hot Air Affair weekend in February.

The theme of this year’s event, “Balloon’n Up Nort’ Yah Sure You Betcha,” is reflected in many of the activities, including an ax-throwing contest, Hammerschlagen (a German game in which contestants try to hammer a nail into a stump), a hot-dish contest, and other lumberjack-themed happenings.

Festivities include a full slate of typical winter festival activities, including a 5K run, geocaching, bird watching, ice carving, a youth ice-fishing derby, and lots of live music. Other activities embrace the wacky side of winter, like the signature smooshboarding contest, where teams of four people navigate an obstacle course while strapped together on ski-like boards.

Whatever your preference for activities, you’re sure to have a hot time in Hudson February 7–9.