Each year, we set aside November 11, Veterans Day, to honor all the men and women who have served our country in uniform. We honor all veterans from generations past to our veterans who are just returning home from war. We thank those who are currently serving and will one day be a veteran.

Oconto Electric Cooperative would like recognize Chuck Wellens. Chuck has been an employee of OEC for over 45 years. He recently did an interview with the local TV station WFRV, and was featured in their Hometown Heroes segment.

The following is by: Kaitlin Corbett, WFRV Morning Anchor/Reporter

STILES, Wis. (WFRV)  It’s a moment frozen in time for Stiles native and Vietnam veteran Chuck Wellens.
It was New Year’s Eve of 1967, a 19-year-old Wellens sat atop a bunker as a Marine at the Khe Sanh combat base in Vietnam, a radio his only form of entertainment.

One of the most famous games in NFL history was being played worlds away, the Ice Bowl between the Green Bay Packers and the Dallas Cowboys. When it came over Wellens’ radio, he knew it was a moment he’d never forget.

“I couldn’t believe it when they said, ‘Live, in Green Bay, Wisconsin,’ I just couldn’t believe it,” Wellens recalled. “I heard, ‘Starr’ and then I heard, ‘touchdown,’ and I just let out a scream,” he said.
Just days earlier, Wellens left for his first tour of duty in Vietnam with a weapons platoon in the Third Battalion.

It was also his first Christmas away from home.

“I remember the ride [to Vietnam]was pretty quiet, but you’re looking out the window and you see all of the Christmas decorations, and then things really start wrapping up inside your mind, you’re getting scared now,” Wellens said. “You’re losing that bravado.”

Little did Wellens know, that New Year’s Eve atop Hill 861 in Khe Sahn would be the calm before a storm.

“The latter part of December and coming into January, things were relatively quiet,” Wellens said. “We pulled operations and there were a lot of rumors going around, but being new to everything, that’s just the way they were talking, that something was about to happen, something big.”

“You’d start thinking of home, just to blot out how miserable you were, and the car, and the friends and everything else,” Wellens said.

Something big was right. On the night of January 21, 1968, Khe Sanh was attacked by the North Vietnamese Army.

“The next thing I knew, they were attacking, it was just a different sound out there,” said Wellens. “We had a pretty well-enforced bunker and it blew it out, it knocked me out and when I came to, I could hear the enemies’ voices and I was really scared then.”

It was the beginning of close to four long months, 77 fearful nights for Wellens and his battalion.

He and his fellow Marines often relied on each other and simple pleasures just to survive.

“You’d start thinking of home, just to blot out how miserable you were, and the car, and the friends and everything else,” Wellens said. “And then on the turn of a dime, you’d get ambushed or something, and just in that split second you’d go from boredom to extreme fear.” 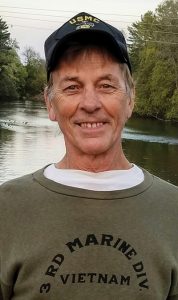 “They always say you never try to get close to anybody, but you couldn’t help it,” he said.

Wellens and his battalion were relieved from Khe Sanh in April of 1969, before he was finally discharged in August of that same year.

Wellens admits he’s seen some hard years since his time in Vietnam, and 2020 has been more of the same; Wellens lost his wife, Melissa, in July.

He still takes things day by day though, appreciating the simple things in life, like he did on top of that bunker on New Year’s Eve.

The interview can be found at https://www.wearegreenbay.com/hometown-heroes/