In the 1880s, “range anxiety” might have described the mental state of cowboys worrying what could go wrong on a cattle drive across the vast American West.

But the two words weren’t commonly combined as a familiar phrase until recent years. Now they identify what’s probably the single biggest barrier to widespread consumer acceptance of battery-powered electric vehicles: Despite often attractive styling and performance qualities and potential for environmentally cleaner operation offered by all-electric vehicles (EVs), an independent market research organization’s 2018 study revealed that fewer than 10 percent of U.S. consumers would consider buying one and the reason most frequently cited was fear of the battery running down somewhere in the wide-open spaces.

Last year another independent study tackled the question of what it would take, in terms of available charging facilities, to reassure potential EV buyers that they wouldn’t be marooned. The researchers, affiliated with the Great Plains Institute for Sustainable Development, are based in the Twin Cities and the slice of geography they picked for their study was the I-94 corridor from eastern Michigan through western Minnesota, the middle portion of the route essentially bisecting the primary readership area of Wisconsin Energy Cooperative News. 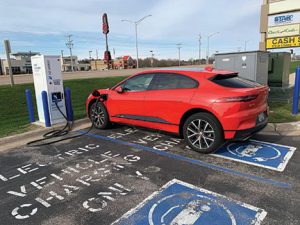 The Great Plains Institute (GPI) defines its mission as “Transforming the energy system to benefit the economy and environment.” Among key goals it identifies “decarbonization of the transportation system through electrification and development of zero-or-negative-carbon, bio-based fuels, synthetic fuels, low carbon oil, and renewable chemicals.”

In one unintended sense, this potentially describes a lifeline for electricity providers casting about for ways to keep their rates stable—and forestall increases—in the face of revenues crimped by flat or declining demand. As the institute (GPI) puts it, “EVs offer utilities load growth opportunities without necessarily increasing coincidental load peaks.” At the same time, GPI says, EVs can “help minimize new investments in generation and distribution infrastructure and actively match load with expanding renewable generation.”

How would this work? The first part is relatively straightforward: If someone owns an electric vehicle, it makes sense for them to install charging equipment at home. It needn’t be special high-speed equipment because the vehicle will typically be on the premises and idle for several hours at a time. This is not only convenient for EV owners; it also lends itself to use in utility load management programs during lengthier charging periods.

The big challenge happens away from home, with availability of public charging remaining, in GPI’s words, “a crucial enabling factor for significant adoption of EVs”—a gentle way of saying so far, there aren’t a lot of people buying them. More “significant adoption” depends on widespread deployment of something called DCFC—or direct-current fast charging. The institute explains DCFC “will enable longer trips, higher mileage-per-day usage, and charging by people without access to home or workplace charging.” 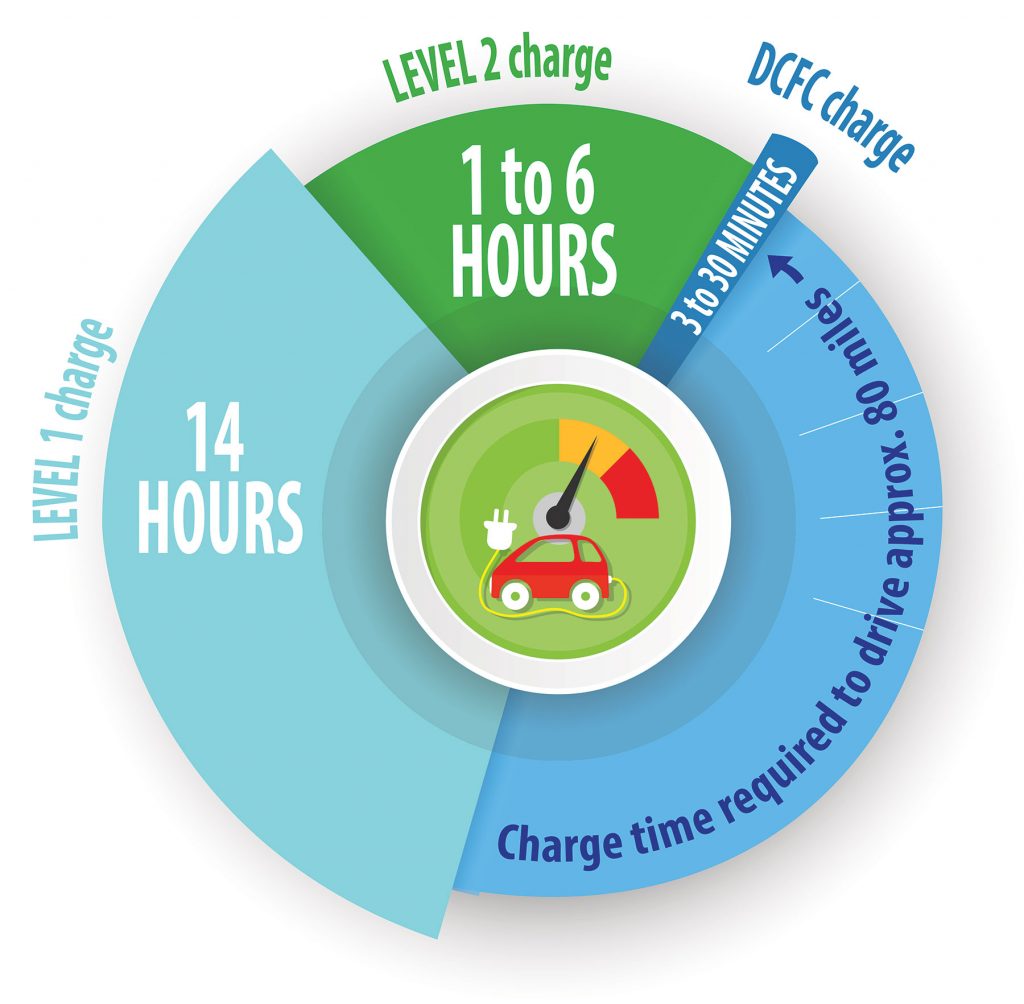 But we aren’t there yet and there’s a long way to go. Released last July, the GPI study cited still another study—by the Idaho-based National Renewable Energy Laboratory (NREL)—saying the United States has “far less public charging infrastructure than what is required to achieve greater levels of EV adoption.” The 15 mid-continent states including Wisconsin had a combined 425 operational DCFC stations, almost 4,000 shy of NREL-projected needs within the next 10 years and to be brought on line at an anticipated cost of $60,000 to $100,000 per plug.

DCFC’s importance is illustrated by the stark difference in charging times at the various levels of efficiency as detailed by GPI. At its most basic, Level 1 charging could require as long as 14 hours to give an EV 80 miles of range. Most charging activity, GPI anticipates, will take place at a Level 2 home or workplace facility requiring anywhere from one to almost six hours of charging to enable 80 miles’ travel. On the other hand, a DCFC facility could give the same EV 80 miles of range in as little as three minutes and almost surely in less than half an hour.

Absent the ability to replenish or extend an EV’s range in the few minutes’ time offered by DCFC, it’s hard to imagine any but the most casual travelers giving up vehicles they can drive for hundreds of miles before needing a refueling stop that might be completed in five minutes.

But the key question posed by GPIÑwhich is unwaveringly committed to broader EV deploymentÑasks how to get around the economic roadblocks to wider DCFC availability.

Analyzing commercial and small industrial electricity rate schedules across 30 different utility service areas in the Michigan-through-Minnesota corridor, GPI found that the price for energy usage at the charger may be greatly exceeded by the cost of the energy capacity needed to serve the charger; in other words, revenues obtainable through consumer usage of a charger may be hard-pressed to cover the charger’s operating cost. This, the GPI analysis concludes, becomes a primary factor in determining how economically attractive it will be to provide DCFC service.

The main obstacle to widespread DCFC deployment identified in the GPI analysis is pretty simple; the solution, considerably less so.

“Demand charges” levied by electric power providers vary significantly, reflecting different costs of providing service in one locality compared with another. Further complication is introduced by the fact that the higher the capacity of a DCFC facility—the key to its ability to quickly recharge a vehicle—the higher the cost of the infrastructure needed to support it and the higher the demand charge is likely to be.

This led the GPI to conclude that at least for the time being in a majority of utility service areas, demand charges would foreclose the possibility of profitable DCFC operation, even at utilization rates of 10 charges per day—and utilization would likely remain low in the near term because of the comparatively small number of EVs.

The GPI analysis acknowledges that “demand charges exist for a reason” and that they will differ with the needs of each power provider and its consumer base. It suggests that answers lie in reducing DCFC capital costs, possibly “through state or utility cost-share in combination with private investment,” and through regulatory agencies “adjusting demand charge tariffs.”

The analysis, GPI says, “is not intended to create a ‘one-size-fits-all’ approach.” 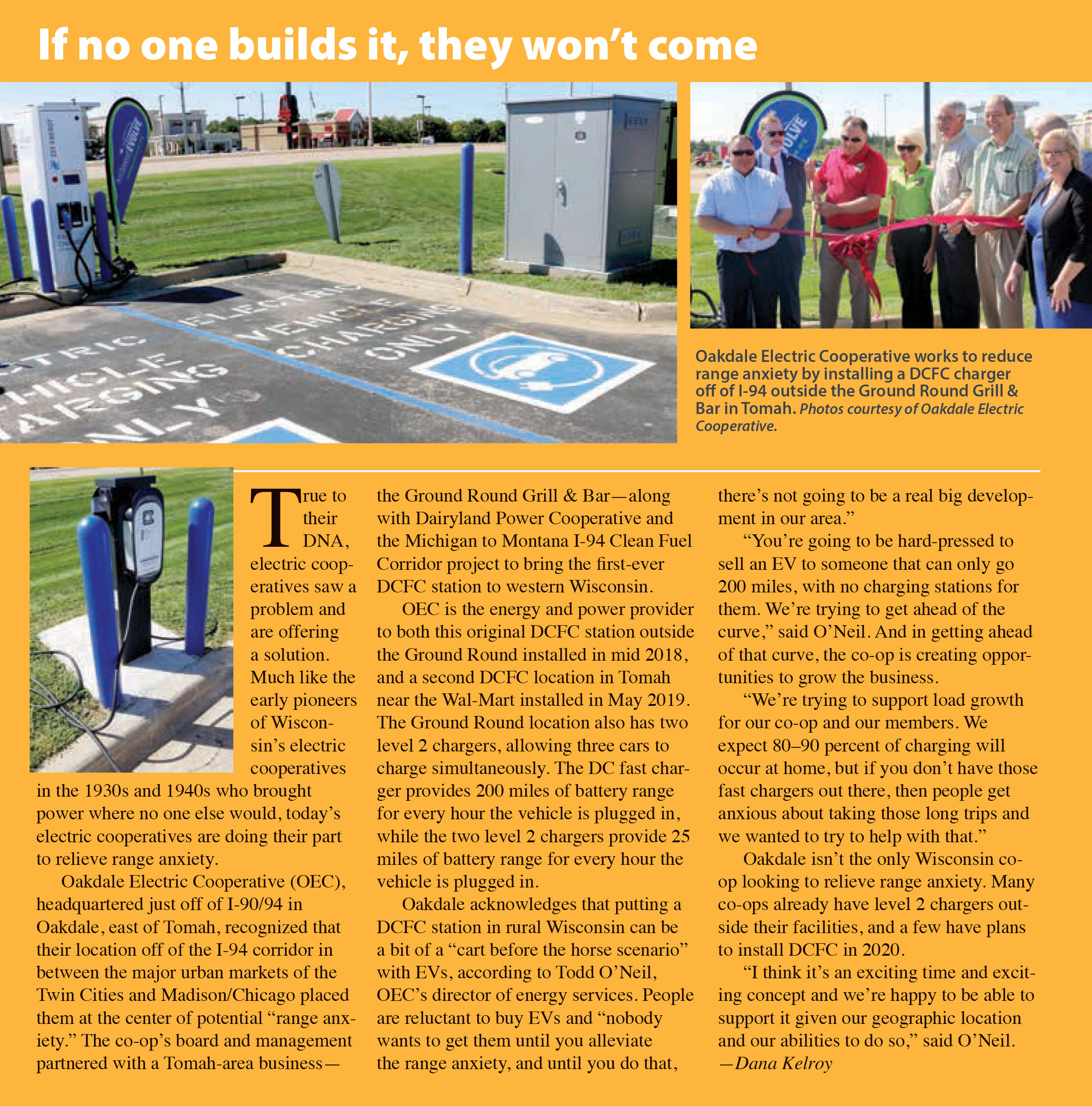