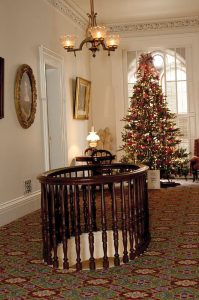 Christmas trees will appear in all corners of the historic Lincoln-Tallman House during the holiday season. (Photo courtesy of RCHS)

If you’re one of the many people for whom 12 days of Christmas just aren’t enough, you’ll enjoy a visit to the Lincoln-Tallman House in Janesville, where holiday festivities will be in full swing for 21 days leading up to the New Year.

This historic home/museum will again host a Holiday Tree Show, a display of about 30 twinkling trees decorated by participating businesses and nonprofit organizations in the Janesville area. This year, however, the show promises to be even more dazzling thanks to some added elements and a new partnership with the nearby Rotary Gardens Holiday Light Show.

“We’re really turning it on its ear for 2019,” Tim Maahs, executive director of the Rock County Historical Society said.

Dates and times for the tour have been coordinated with those for the Rotary Light Show, providing a full slate of holiday entertainment for those who want to keep the celebration going all day. Guests may stroll throughout the fully decorated rooms of the Lincoln-Tallman House between noon and 7 p.m. on Thursdays and Fridays, and from noon to 4 p.m. on weekends, and then cross over to the Rotary Gardens in the evening to take in the 20 acres’ worth of outdoor light displays.

Other new highlights include an outdoor lighting contest, and live holiday music and complimentary homemade Christmas cookies and cider on tour days.

“The house will just be brimming with holiday cheer,” Maahs said. 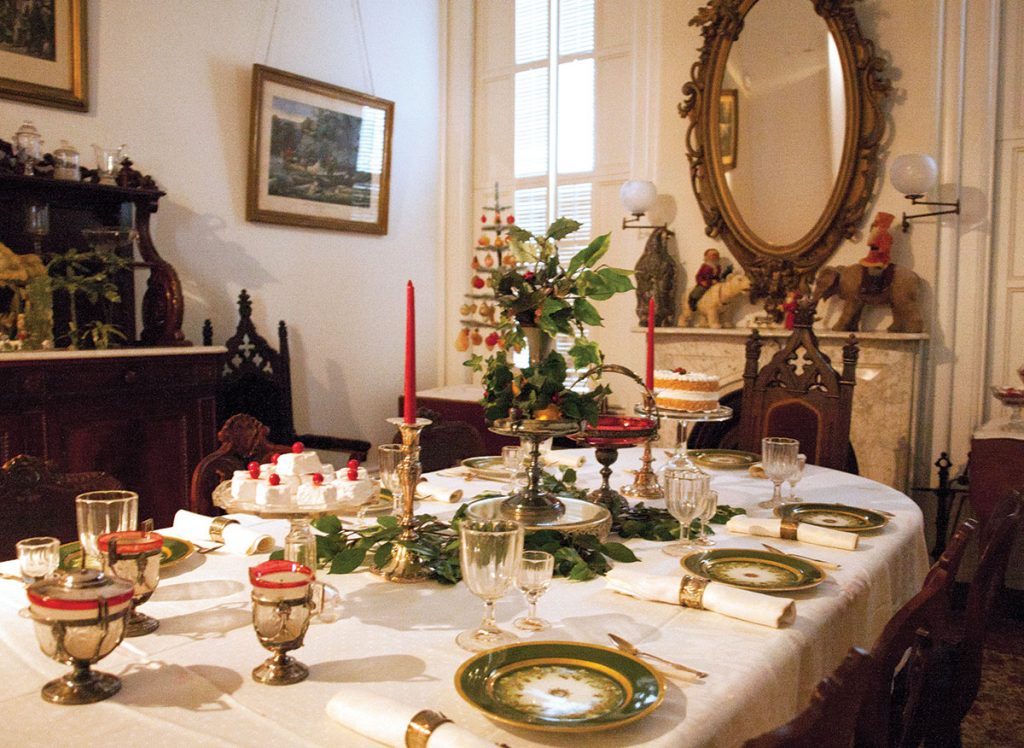 The table in the grand dining room will be set for an 1850s holiday feast during the Lincoln-Tallman House’s Holiday Tree Show. (Photo courtesy of RCHS)

Of course, holiday cheer is nothing new here. Maahs said the house has always been beautifully adorned with traditional holiday decorations for Christmas, but the season was switched up a few years ago with the launch of the tree sponsorship program. Fully lit artificial trees of various sizes are provided, and sponsors decorate them in any way they choose. In addition, the house’s four fireplace mantels are each uniquely decorated by a sponsor.

Tours will be self-guided only, allowing visitors the freedom to explore the tree show at their own pace.

New this year, businesses and organizations were invited to claim one of 17 areas on the grounds and decorate as they wish; the only requests were that the display include lights and use real greenery as opposed to artificial. Visitors to the Holiday Tree Show will be invited to cast a vote for their favorite outdoor display.

“This will give people more time to meander and just enjoy the lights even on the days we’re not open,” Maahs said, noting the outdoor lights will be on all season long, regardless of the museum’s hours. 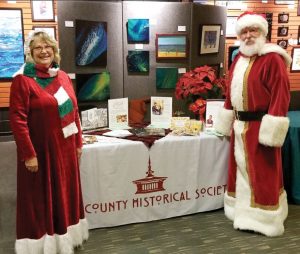 Father Christmas and Mother Christmas (a.k.a. Rock Energy Cooperative members Tom and Kathy Boguszewski) will appear in a couple of accompanying holiday events. The Boguszewskis are among the hundreds of Rock County Historical Society members who volunteer their time with the Lincoln-Tallman House. (Photos courtesy of Kathy and Tom Boguszewski)

The Lincoln-Tallman House is operated by the Rock County Historical Society (RCHS), a team of about 350 members, a 22-member board of directors, and about 200 volunteers who help maintain the historic building and come up with creative ways to share it with the public. One of those volunteers is Rock Energy Cooperative member Kathy Boguszewski, who serves as the RCHS intern and volunteer coordinator. She’s responsible for assembling the volunteers who will be stationed strategically throughout the house on Holiday Tree Show dates, ready to answer any questions.

Boguszewski and her husband, Tom, are also actively involved in several other events that are woven into the holiday schedule. Tom plays Father Christmas, who spends a full day at the museum in November, in time for families to have pictures taken for their Christmas cards. 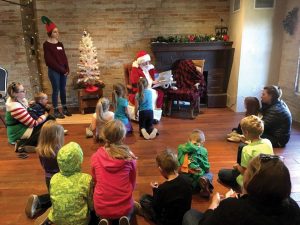 Father Christmas will also appear at the recently restored Tallman Carriage House, a free [but reservations required] holiday gathering on December 14. This event, organized by Kathy and sponsored and staffed by student volunteers from Rock University High School, features a choral performance by the Janesville Parker High School Seventh Heaven Choir. Guests are also treated to Christmas cookies prepared by the student volunteers.

The Tallman Carriage House is open through January and hosts a number of holiday-related events, both private and public. One is the Antlers and Cheer party on December 5, which begins with a viewing of the Holiday Tree Show in the Lincoln-Tallman House, at which tree sponsors meet and greet with guests. The party continues next door in the Tallman Carriage House, with music, appetizers, holiday trivia, and cash bar [tickets required].

Ahead of its Time

Every event at the Lincoln-Tallman House, during the holidays and other times of year, is an opportunity for the public to learn about and appreciate the house itself.

“This is such an unusual place, to have been owned by this one family and be so intact from the mid 1850s,” Maahs said. “Eighty percent of the contents are the family’s. It’s very rare to have a house like that.”

As Maahs explained, the property was purchased sight unseen by William Tallman, an attorney from upstate New York, who had no intention of actually living on the land he just bought but fell in love with it after first seeing it. He brought his family here in 1850, and a couple of years later began construction on the house, which was completed in 1857.

Maahs noted that the house, built in the Italian Villa style, was rather “avant garde” for its time, built with advancements that were not typically seen in houses of that era.

“He had the house outfitted with gas piping throughout even though natural gas had not even been piped to the city yet,” Maahs said. “So when it finally came a few years later, he had a huge party when the house was lit for the first time.” 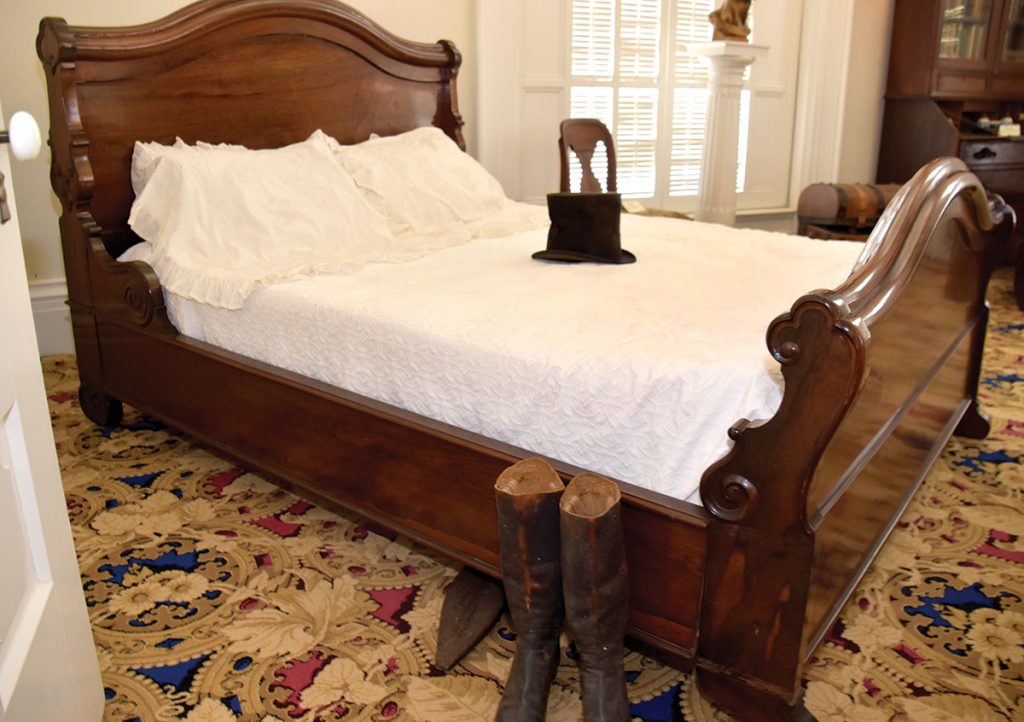 This the Lincoln Bedroom, where Abraham Lincoln once stayed, including the bed he slept in.

The Lincoln portion of the house’s name comes from a visit by Abraham Lincoln in 1859, when he made a campaign stop in nearby Beloit. Tallman attended that speech and afterward invited the candidate to stay at his house. Maahs noted custom at the time called for houseguests to place their boots outside the bedroom door to be cleaned while they slept, and evidently Lincoln’s boots were not ready when he awoke that morning. Maahs says according to the story that’s been passed down, Lincoln waited so long for his boots to be cleaned and returned that he missed his train and ended up staying a second night.

The bed in which Lincoln slept is still there, as is a piece of Lincoln’s presidential china.

“This is the last remaining place on record where Lincoln stayed in Wisconsin,” Maahs said.

With so much rich history, it’s no surprise that the Tallmans, who lived in the house until 1915, wanted to preserve it. In 1948 the family gave the house to the city to be operated as a museum, with one additional caveat—the house would be known as the Lincoln-Tallman House.

The RCHS has worked hard to maintain the house in its 1850s splendor while modernizing it for today’s use. For example, the original gasoliers that were once so innovative were converted to electric lights after a successful fund-raising campaign in 2016, but the new electric lights were made to emulate the soft flickering of gas lighting.

There’s no better time to appreciate the lights—former gasoliers or otherwise—at the Lincoln-Tallman House than during the holidays. At this historic home, the season is too bright to be contained to just 12 days.