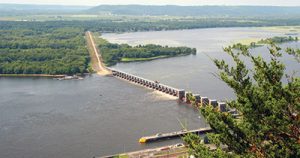 So say the opening words of a lengthy paper released this past summer by the U.S. Department of Energy (DOE). At first glance they might seem to qualify as a present-day rarity: a statement from a government report no one would be likely to dispute. Hopes along those lines will be largely dashed within the next few paragraphs, but the report titled “Hydropower Vision: A New Chapter for America’s 1st Renewable Electricity Source,” does portray a hopeful future for the nation’s hydro resource, even if it’s a future that would come at a hefty price.

This isn’t the first agency report in recent years to envision untapped hydropower potential that could furnish the U.S. power grid with additional generation that’s both renewable and reliable. However, it’s probably the first to place primary emphasis not on identifying suitable generation sites, but rather on creating a hydro resource from scratch where none currently exists. Moreover, it’s almost certainly the first major, published report on hydro expansion in which increased reliance on hydropower is not the top priority.

Add or Subtract?   Nowhere is it more apparent than in the energy industry that we live in an age of contradictions. More than a few times readers of this magazine, interested in clean energy solutions, have asked whether opportunities to add hydroelectric generation are going unexploited. The answer has been that in Wisconsin, the resource is—perhaps surprisingly—limited and the best sites have long since been developed. (There are exceptions to this, as we’ll soon see.)

On the other hand, concerted efforts are underway to remove dams, in pursuit of the restoration of free-flowing rivers. The environmental organization American Rivers counts 358 U.S. dams removed since 2010. Most have been small, obsolete, or in a degraded and potentially unsafe condition, and only a relative few were hydroelectric generation facilities. But even as the DOE speaks of vast hydro expansion, other agencies of state and federal government work actively to eliminate existing generation units.

In April, the Portland, Oregon-based investor-owned utility PacifiCorp signed an agreement with the Department of the Interior, the Department of Commerce, the states of California and Oregon, and regional tribal governments to decommission and demolish by 2020 four functioning dams on the Klamath River with a combined capacity of 163 megawatts. California Governor Jerry Brown told the audience at an April 12 signing ceremony that “This is a good exercise of humankind correcting some of the mistakes that it’s made in the past.”

Soon after, in May of this year, a federal judge ordered the U.S. Fish and Wildlife Service to at least consider breaching four Snake River dams in Oregon with a combined power output of as much as 3,000 megawatts to restore salmon habitat.

But perhaps the most striking contradiction is between the DOE’s July report, another, even more optimistic one predating it by four years, and a 2014 energy forecast from a separate branch of the DOE downplaying major hydro expansion because of unfavorable economics.

In 2012 the Oak Ridge National Laboratory prepared a study for the DOE identifying 61 gigawatts (61,000,000,000 watts) of hydroelectric power potential on U.S. waterways without existing dams or diversion facilities. That figure, 24 percent larger than the one promoted in the DOE’s July report, contrasts starkly with the DOE’s own Energy Information Administration (EIA) forecasting actual development of just two gigawatts of new hydro capacity through 2040. The huge difference, the EIA explained, “represents the significant gap between technical potential on the one hand and economic and operational potential on the other hand,” or as the agency put it more succinctly in the headline of a July 10, 2014, news release, “hydro growth limited by economics, not resources.”

Thus, the combination of government and interest-group actions diminishing the number of available hydro generation sites and the economic obstacles that would still confront any project that survived environmental challenges makes the DOE’s claim in “Hydropower Vision” a real eye-opener.

The expansive report—more than 600 pages with appendices—asserts that the United States could increase its hydropower capacity by half again as much as is currently in place nationwide. Existing U.S. hydro capacity is 101 gigawatts. The DOE report suggests the figure could grow to 150 gigawatts by 2050. Were that number realized it would surely advance efforts to add emissions-free generation by exploiting a “fuel” source that—like wind and solar—is there for the taking, but unlike wind and solar is available all the time.

With closer examination, however, a reader finds that the main point of the report is clearly, if only implicitly, not about adding hydropower.

Renewables Backstopping Renewables   Though “Hydropower Vision: A New Chapter for America’s 1st Renewable Electricity Source” drew considerable attention this summer among energy trade publications, coverage for the most part didn’t probe much beyond the headline-grabbing idea of a 49 percent capacity increase.

One reason may be that the report manages to be extensively detailed and at the same time short on specifics. For instance, the first thing Wisconsin Energy Cooperative News looked for was a state-by-state roster of sites for new hydro development or upgrades at existing facilities—the latter being the most readily achievable method of growing capacity because no pristine site is involved. We never found such a list. DOE maps indicate the potential to expand capacity at perhaps four dozen Wisconsin sites, but none is specifically identified.

Several existing dams without generation equipment are indicated, unidentified but apparently on the Mississippi River and presumably the same ones listed in the April 2012 study prepared for the DOE by Oak Ridge National Laboratory (ORNL). This summer’s report omits those specifics.

But the real surprise is that most of the proposed growth would result not primarily from a plan to utilize hydro in its own right, but rather from an assumed massive expansion of wind and solar generation necessitating acquisition of great amounts of new, dispatchable generation capacity for backup.

Coincidentally in August, the National Bureau of Economic Research noted a 26-country, two-decade study associating each 0.88 percent increase in non-hydro renewable generation with a 1 percent increase in fast-ramping fossil generation such as natural gas, to meet the need for backup. It could be asked if the July DOE report promotes hydro simply to comport with the current federal preference to avoid fossil fuels that would otherwise backstop intermittent wind.

Moreover, the bulk of the expansion—36 of the estimated 49 gigawatts or 73 percent of the new capacity—is seen coming not from additions to existing facilities but from new pumped storage hydro to be built between 2030 and 2050 to accommodate grid penetration by wind and solar reaching 45 percent.

Pumped storage is the industry term for using generation during hours when more is available than is required by the grid, to pump water uphill into a reservoir and later release it to flow back down and spin the turbines of a generating unit when its power is needed.

Jose Zayas, director of the DOE’s Wind and Water Power Technologies Office, wrote in a July 26 statement accompanying the report that “New pumped-storage hydropower technology can further integrate variable generation resources, such as wind and solar, into the national power grid because of its ability to provide grid flexibility, reliability and reserve capacity.”

However, Appendix B of the July report notes that “Unlike the [generation added to non-powered dams or new stream development]resource, no clear process for the identification of the total national resource of pumped storage exists.” Appendix B did say 166 pumped storage projects with a combined capacity of almost 109 gigawatts—more than double the entirety of the report’s projected hydro capacity increase—had applications pending before the Federal Energy Regulatory Commission.

The report noted that because of “a complex set of variables,” the 49 gigawatts of potential growth “should not be interpreted as DOE projections or targets.”

Unmentioned is that both pumped storage and conventional hydro can provide the “grid flexibility, reliability and reserve capacity” cited by Mr. Zayas with or without the new intermittent generation the hydro in this case would be built to back up. 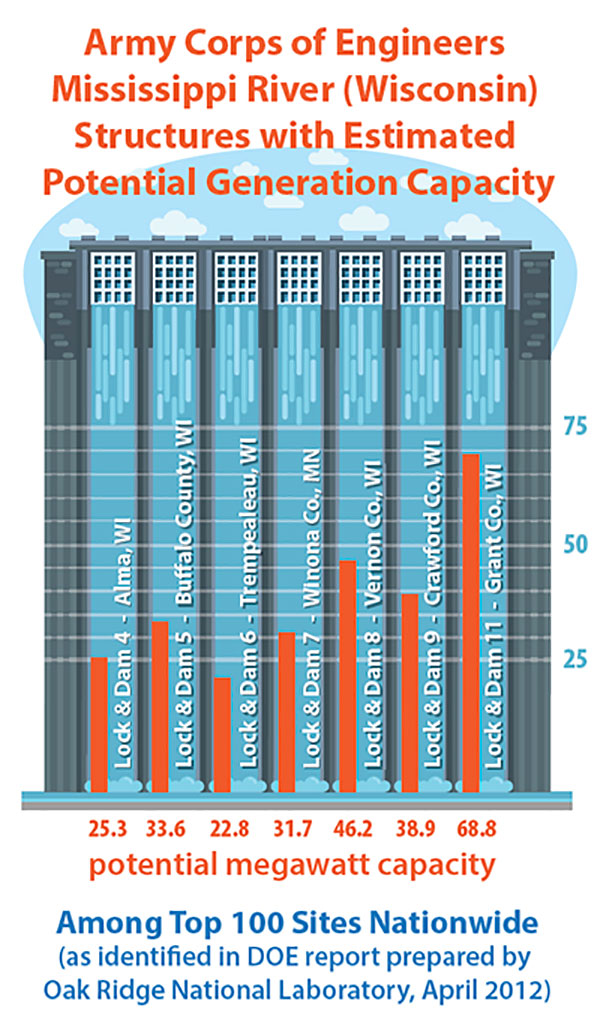 If the DOE’s July report is short on specifics, the four-year-old ORNL study is not only loaded with them but also suggests greater development potential.

It ranked Wisconsin 15th among the 48 contiguous states for untapped hydro potential, and lists seven Wisconsin sites among its top 100 nationwide. All told, the ORNL study found that 13 existing Wisconsin dams, if generation equipment were added, could produce a combined 313 megawatts, roughly enough power to replace a modest-sized fossil-fueled plant.

All but four of the Wisconsin sites are Army Corps of Engineers facilities on the Mississippi between Dubuque, Iowa, and Red Wing, Minnesota. Their estimated generation capacity—again, were equipment installed—ranged from 68.8 megawatts at Lock and Dam 11 (Grant County) down to 22.8 megawatts from Lock and Dam 6 at Trempealeau. No Wisconsin site away from the Mississippi was rated at greater than single-digit (in megawatts) capacity.

Nationwide, the ORNL surveyed 54,000 of about 80,000 non-power-generating dams. Illinois and Kentucky were the two top-rated states, each with more than 1,200 megawatts of unused potential. Arkansas placed third, with more than 1,100 megawatts of estimated capacity available for development. Not surprisingly, high-potential facilities tend to be concentrated in the Mississippi, Ohio, and Red River Valleys.

Four years ago, the DOE was unreservedly enthusiastic about the ORNL study, characterizing as a “unique national resource” the non-powered dams it identified and noting that the addition of power equipment to existing structures “can often be achieved at lower cost, with less risk, and in a shorter timeframe than development requiring new dam construction.”

Some of the Above?   While energy production, a vital interest of every U.S. consumer, undergoes daily scrutiny, a mainstream political position over the past several years has been to favor an “all of the above” approach utilizing renewables, hydro, nuclear, and increasingly sophisticated emission-control technologies applied to more traditional energy sources. The goal is ample supply with consistent reliability and maximum protection against price volatility.

But demands for new restrictions on every source of 24-hour reliable generation grow steadily more common. Natural gas has been rapidly supplanting coal in the generation mix, with roughly half coal’s carbon dioxide emissions per unit of energy produced. But the hydraulic fracturing that’s made gas abundant and cheap is targeted for tighter regulation, and minor earthquakes have been attributed to underground disposal of wastewater from drilling.

Still to be seen is whether the resulting concerns about induced seismic activity throw a wrench in the works of carbon dioxide capture and underground disposal, the centerpiece of the DOE’s and Environmental Protection Agency’s joint vision of clean coal generation.

And now comes hydro. At the beginning of October, researchers at Washington State University published a paper in the journal BioScience saying reservoirs constitute large sources of greenhouse gas emissions, in particular methane, which they say is far more potent than carbon dioxide in trapping the infrared radiation blamed for global warming, the core issue in our unending struggle over energy choices.

“Usually thought of as carbon-neutral sources of energy, hydropower dams, while far cleaner than fossil fuel for generating power, nonetheless are sources of carbon pollution,” the Seattle Times reported at the end of September, previewing the BioScience paper.

Step by step, “all of the above” glumly plods down the steadily narrowing path to “few of the above.”