Electric cooperatives have an honored tradition of assisting one another’s recovery efforts when severe weather damages a system beyond local capabilities for timely service restoration. This tradition of mutual assistance puts the principle of cooperation among cooperatives into action, usually within a single state. Sometimes co-ops reach out farther. 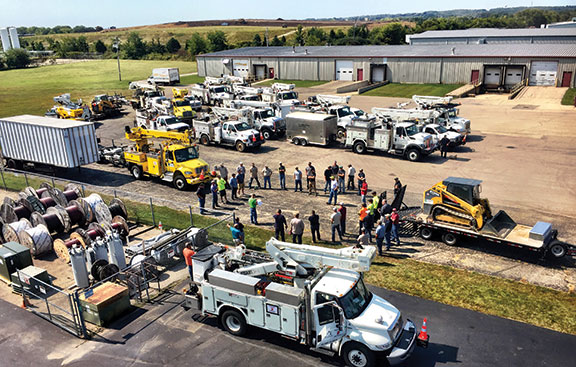 Wisconsin co-op line workers gathered at Rock Energy Cooperative in Janesville September 11 to form a convoy for the trip to storm-ravaged Florida.

Irma was the seventh-strongest U.S. hurricane since 1850, according to Philip Klotzbach of Colorado State University, an institution that’s been central to the development of U.S. hurricane forecasting. It packed ample force to disable three-fourths of Clay Electric’s distribution system. 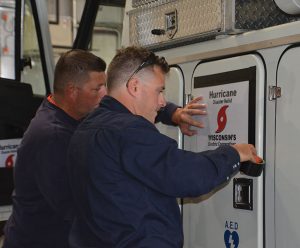 Signs identifying the vehicles as part of a coordinated hurricane relief effort were applied as a simple but important expedient in dealing with regulatory red tape when passing through multiple jurisdictions.

The relief mission is similar to assistance rendered by Wisconsin co-ops 12 years ago after Hurricane Katrina. Over a four-week period, personnel from 14 Wisconsin electric cooperatives rotated in and out of Louisiana, helping rebuild a local co-op distribution system that had been almost totally destroyed.
(Photos by Dana Kelroy)