Those who have spent time around legislative institutions know that when a proposal is moving so fast it’s scheduled for a public hearing before a complete draft exists, the chances of anything good happening are between slim and none.

Let’s hear it for slim.

Just before Memorial Day, the Wisconsin Electric Cooperative Association (WECA) heard of legislation creating new pole-attachment obligations for electric cooperatives and municipal utilities. Alarms went off when we learned recruitment of cosponsors was limited to one day and the bill, labeled “Preliminary Draft—Not Ready for Introduction,” was already scheduled for a hearing the afternoon following the holiday weekend: sure signs that someone was racing to enact a new law with what could most charitably be called minimal public scrutiny.

WECA obtained a copy and found the bill would create a presumptive right for any wireless service provider to attach antennas and other devices to utility poles owned by co-ops and municipal utilities; that we’d have to make our poles ready for such installations and would be prohibited from recovering the extra costs when “make-ready” provisions compelled the use of outside help; and that easements negotiated between co-ops and their members would be treated as a public utility right-of-way, mandating that wireless providers could install equipment on or over private property intended to host no more than a power pole.

No Wisconsin co-op opposes extending rural wireless service. In fact, one co-op manager said if someone showed up with a plan to provide service, “My first question would be ‘how can I help?’ ” Wisconsin co-ops have pole-attachment agreements with others and there have been no complaints about their terms or fees.

But the details matter. We soon learned that AT&T was behind the lightning-fast legislation, seeking guaranteed, low-cost access to consumer-dense municipal utility service areas. Any benefit to co-op members would be an afterthought, at best.

This was confirmed, perhaps accidentally, by the president of AT&T Wisconsin, who admitted at the May 30 hearing that the technology would be prioritized for “the most urban, most dense areas; that’s frankly where the economies of scale work best for the network owners.” 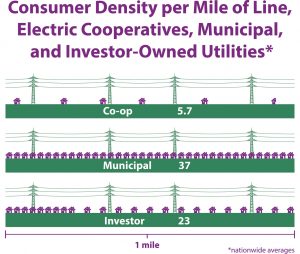 In lightly populated rural areas, he continued, “This technology’s not going to be very efficiently deployed there, so it’ll take an awfully long time before it gets there.”

Translation: Co-ops and their member-owners get a new obligation, potential costs, a questionable infringement of private property rights, the eventual risk of lightly trained people installing conductive materials in or near the space occupied by our power lines, and an “awfully long” wait for the widely desired service.

Nevertheless, it was clear a bill was going to pass. Mounting an intensive effort, WECA lobbied for and in a few days obtained a co-op exemption.

The revised draft offered more equitable treatment for those still affected and spells out sensible dispute resolution procedures. If a provider wants access to a co-op service area, existing pole-attachment policies the cooperative already has in place for agreements with others would apply. (The bill may have passed by the time you read this, or might be delayed until fall.)

Nothing in the new legislation will make rural wireless deployment take any longer, and co-op member-owners gain protection against inconvenience and potential expense. It highlights the value of a lobbying effort with a decades-long reputation for honesty—and a willingness to fight when there’s no other choice.

A few weeks ago the prospects were slim and none. Thanks to the strong credibility of WECA’s government relations program, slim won.