It was November 2004 and for lots of American families the fondest Christmas wish was to simply be together, not worrying about loved ones on active military deployments in countries far from home.

The situation wasn’t unfamiliar, and some had already offered their skills and resources to make things a little better. Since the 1990s here and there, coordinated donations of Christmas trees benefited National Guard units and other military personnel on peacekeeping assignments in the Balkans. But by 2004 the world was an even more dangerous place and FedEx Corporation contacted the National Christmas Tree Association (NCTA), asking if they could round up some trees for donation at military bases.

“It was late in the season but growers gathered a modest number of trees and managed to get them delivered,” NCTA Executive Director Ann O’Connor told Wisconsin Energy Cooperative News. “It was a small thing that first year but it sparked interest across the whole industry.” The full-fledged program called Trees for Troops hadn’t exactly been born, but it was well on its way. 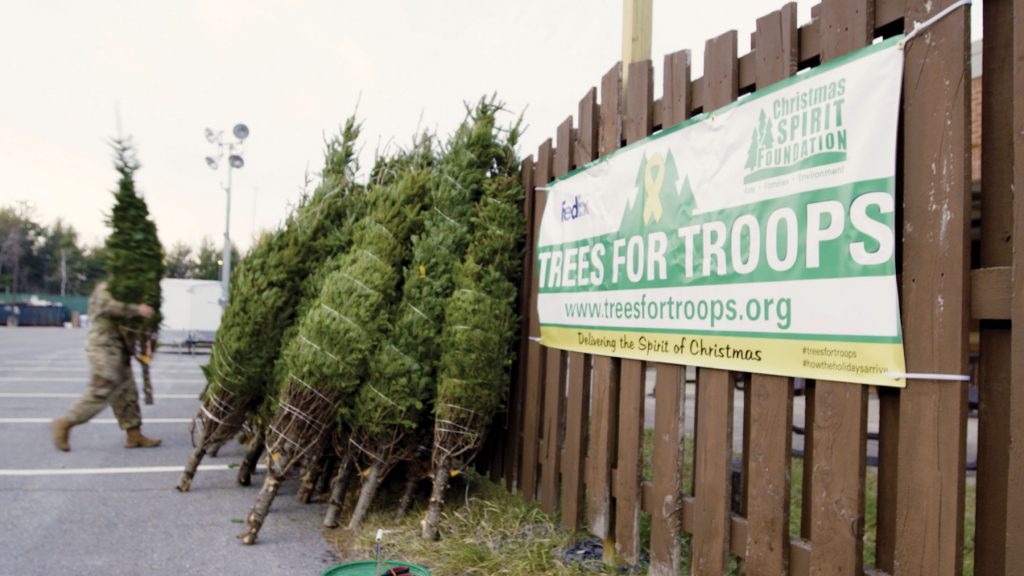 Photo courtesy of Trees for Troops

The association decided it could best sustain a tree-donation program by creating a nonprofit, 501(c)3 charitable organization to be known as the Christmas SPIRIT Foundation (CSF). It would accept trees and monetary contributions from growers and their customers nationwide, enabling donations that recently have been totaling between 16,000 and 19,000 trees annually.

Growers in 24 states have been participating. Figures vary from year to year but in 2018 the number of contributing growers nationwide reached 450. Last year, 34 Wisconsin growers pitched in along with their statewide group, the Wisconsin Christmas Tree Producers Association. Trees are delivered to about 70 military bases in the U.S. and to American personnel overseas in places including Afghanistan, Guam, Iraq, Kuwait, Qatar, and Spain. 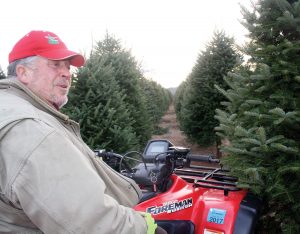 One Wisconsin grower who’s participated is Oconto Electric Cooperative member Dave Vander Velden, now retired from Whispering Pines Tree Farm. (Vander Velden was featured in this magazine in 2016, when his farm produced that year’s White House Christmas tree.) Whispering Pines first contributed to Trees for Troops in 2006, he told us, noting that Wisconsin growers make an effort to supply about 600 trees each year.

Gratitude for the sacrifices made by military personnel and their families was front and center in Vander Velden’s response to our questions about what the program means to him. “The one, overriding thing that’s most important is that this is recognizing our troops and how they’ve helped us,” he said. “It’s a small token of appreciation for all they’ve done for us. The farmers feel they should take care of our troops.” 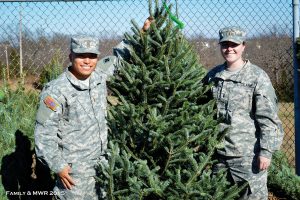 Photo courtesy of Trees for Troops

Vander Velden pointed out that the program has donated about 225,000 trees since its inception and was recognized with the Spirit of Hope Award at a 2017 Pentagon ceremony. Established in 1997, the award is named for the late comedian Bob Hope, famous for his worldwide travels entertaining U.S. troops. It’s presented jointly by all the service branches. Vander Velden also noted that in 2012 Trees for Troops was honored among 20 groups nationwide selected as finalists in the Joining Forces Community Challenge, which recognizes service and support for military families.

We asked whether he ever hears from people whose holidays have been brightened by the gift of a real, live Christmas tree and learned that at least in his case, nobody knows where the tree came from.

“I don’t put my name on there,” Vander Velden said. “It’s something I can do anonymously to help the families, but I know it’s very well appreciated. For the families, it’s just good knowing someone cared about you.”

An aspect of Trees for Troops that Ann O’Connor seems to especially appreciate is how well it works without a rigid structure. “People can bring five trees, 20 trees, each farm does it a bit differently,” she says.

In Wisconsin, growers converge at three collection points where donated trees are loaded into FedEx tractor trailers. They gather at Wausau and at Portage. The busiest collection point contributes its own distinct Wisconsin flavor: It’s in Green Bay, at the parking lot of Lambeau Field. 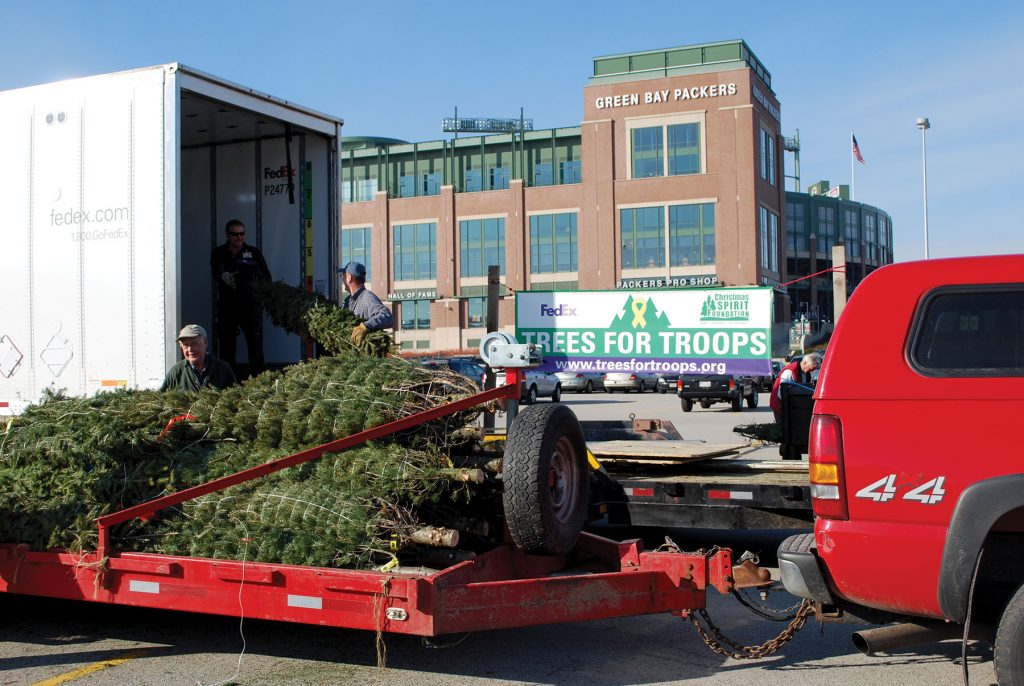 “The thing that’s exciting is it can be done differently from state to state and from grower to grower,” O’Connor told us. “They feel that connection to the military for whatever reason—maybe they’re veterans, maybe they have a family member who’s serving—and each chooses to give what they can.” 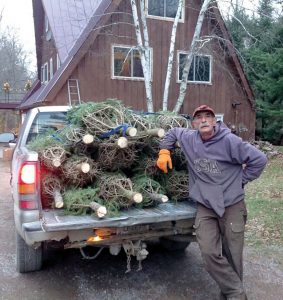 A donor for nearly a decade, Clark Electric member Tim Kopp of Kopp Forest Products guessed that the base where his son was stationed in Bahrain had the only live tree in the country when he sent one there in 2010. Kopp began donating to Trees for Troops the following year and is seen here with his 2017 contribution. Photo courtesy of Kopp Forest Products

While at least some of the contributors choose to remain anonymous, Trees for Troops and the Christmas SPIRIT Foundation can’t, and the thank-you notes pour in.

With one parent deployed, families are understandably thinking “Christmas is going to be kind of crummy,” O’Connor tells us, “but then this program can get the whole family into the spirit. The kids get to go help pick out a tree and they get a candy cane. It can turn a terrible time of year into something special. They can make memories.”

That’s borne out by comments from tree recipients, posted on the CSF website. One wrote, “Thank you for your kindness. I look forward to celebrating this holiday season with my son, and will think of our troops, and offer up a prayer of gratitude each time I look at our tree.”

Complicating the situation for families at home, often in base housing, is a double separation: They’re far from loved ones overseas, and probably far from their own families here in the U.S. The CSF website addresses this, expressing hope that the gift of a real Christmas tree “will help bring the feeling of home a little closer, wherever they may be spending their holiday, as well as alleviate some of the financial burden the holidays can bring.” 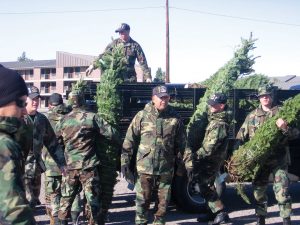 Nobody needs to actually grow a tree in order to get involved in the Trees for Troops program. Visitors to the website www.treesfortroops.org can click on “donate” for directions on making monetary contributions and can see more of the program details and history sampled here. Checks made out to the “Christmas SPIRIT Foundation” can also be mailed to:

The overseeing charity, the Christmas SPIRIT Foundation, is among the select holders of the Best in America Seal of Excellence, an award available only to charities that pass an independent review and are able to document annually their adherence to high standards of accountability and cost effectiveness.

rees are loaded into a FedEx trailer at a collection point outside the American Legion headquarters in Portage. Photo courtesy of the Wisconsin Christmas Tree Producers Association