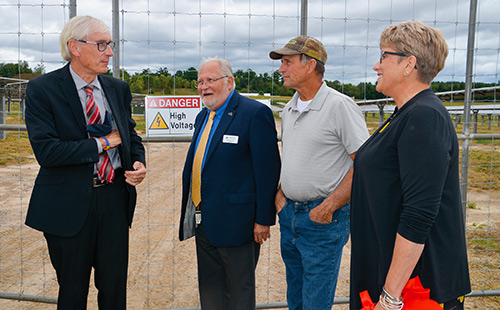 Wisconsin Governor Tony Evers attended the ribbon cutting of Strobus Solar, a 1.5-megawatt solar electric project located near Black River Falls in Jackson County. The project will sell its output to Jackson Electric Cooperative under a long-term contract and is expected to produce 3,218 megawatt-hours per year, enough to power 322 Wisconsin homes.

The Strobus Solar Project is located on about 12 acres of land leased from Northern Family Farms, Wisconsin’s largest Christmas tree grower. The land around the project will also become pollinator habitat.

OneEnergy Renewables developed the project, which was built with the latest technology, including bi-facial solar panels.

Spectrum Mid-America, LLC, an affiliate of Charter Communications, Inc., is urging the PSC to deny funds for areas in which the company intends to extend service by the end of 2024, but the Wisconsin Electric Cooperative Association and other agencies rebutted that request, arguing that local entities such as cooperatives extend better, faster service, and awards should be based on merit.

The PSC’s $100 million broadband expansion program is funded by the American Rescue Plan Act of 2021. Awardees could be announced as early as this month.

Proposed Legislation Would Ban Impersonating a Utility Worker in Wisconsin

A bill circulating in the state legislature would revise state law, making it illegal for a person to portray themselves as a public officer, public employee, or employee of a utility.

According to bill authors, there have been instances where people have acted as though they were employed by a local utility in an effort to gain access to homes. Current law states it is illegal to act in an official capacity, or execute functions of a public official, but it does not specifically outlaw other impersonations.

Dairyland Power Cooperative (DPC) has announced its intent to acquire the RockGen Energy Center located in Cambridge, just east of Madison. The generation and transmission cooperative has entered into a purchase agreement to acquire the 503-megawatt natural gas power plant from Starwood Energy.

The 20-year-old RockGen Energy Center is a simple-cycle, dual fuel power generating facility that operates mainly on natural gas. One key feature—the three 168-MW, low-NOx combustion turbines can ramp up and down quickly to support intermittent solar and wind resources. It can also operate on fuel oil, if necessary.

Dairyland said the acquisition supports its efforts to transition to more renewable energy while maintaining reliability.

A Minnesota Appeals Court sided with Dairyland Power Cooperative and Minnesota Power in a recent ruling related to the $700 million Nemadji Trail Energy Center, a 625-megawatt natural gas plant to be located in Superior. The court found Minnesota Power is allowed to create a Wisconsin subsidiary in order to own half of the plant.

Dairyland says the project is renewable-enabling and supports a plan to transition to more renewable energy by allowing the closure of coal-fired plants while ensuring reliability.

The court of appeals decision says the evidence supports that claim and upholds approval by the state’s regulatory agency, which determined the gas plant is a cheaper and more reliable alternative to coal than wind and solar.

Badger State Solar Project: Up and Running by 2024

The developers of Wisconsin’s Badger State Solar project now expect the project to be on-line by December of 2023. The project has been in development since early 2017.

The Badger State Solar project is a 149-MW project that will be located on about 1,203 acres of mostly agricultural land in Jefferson County. Dairyland Power Cooperative has entered into an agreement with Ranger Power’s Badger State Solar to purchase all the power generated from the project for 30 years.

The project is expected to generate about 0.4 percent of Wisconsin electricity sales, or enough to power about 20,000 homes.