A half-century of environmental progress…What?

At the end of February, the Environmental Protection Agency (EPA) said it would keep in place the national air quality standard for sulfur dioxide emissions the agency proposed and adopted under the Obama administration in 2010.

Interest groups weren’t pleased. Some wanted the standard loosened; some wanted it tightened. Rejecting both positions, the EPA on February 26 announced its final decision to “retain without changes” the 2010 standard “after carefully reviewing the most recent available scientific evidence and risk and exposure information and consulting with the agency’s independent science advisors.” An Associated Press (AP) report said the EPA found the 2010 standard “both necessary and sufficient to protect public health.”

The AP also reported one interest group claiming the decision put millions at increased health risk. Though it may not be obvious how retaining an existing standard increases risk, the reaction is altogether consistent with widely held perceptions about environmental issues repeatedly identified by major polling organizations.

Sulfur dioxide (SO2) is among the six “criteria pollutants” targeted for regulation under the original Clean Air Act in 1970. Natural sources such as volcanic eruptions release SO2 in gaseous form into Earth’s atmosphere, as do some industrial processes including coal combustion; hence coal-burning power plants that remain in service are equipped with SO2 reduction technologies to ensure Clean Air Act compliance. The Obama-era SO2 standard set a limit of 75 parts per billion in ambient air as adequate to protect human health.

Calculating emission reductions is complicated by different baselines, from 1970, when the Clean Air Act (CAA) was signed into law, through 1980 and 1990 to reflect Congress amending the Act along the way. But by any objective measure, the CAA has been notably successful in reducing air pollution.

For reasons Wisconsin Energy Cooperative News can only speculate—and therefore won’t pretend to identify—this success has not registered with much of the public.

Every spring, pollsters probe Americans’ opinions on environmental issues. At press time, this year’s results weren’t in. But at the end of March 2018 the Gallup Poll reported that 59 percent of its U.S. survey respondents rated overall environmental quality negatively, while just 40 percent rated it “excellent” or “good.” Gallup noted that the percentage giving favorable ratings was “not dramatically lower than in prior years”; however, it reflected “the least positive assessment of the environment since 2009.”

Six weeks later, Pew Research reported finding that “Majorities of Americans say the federal government is doing too little to protect key aspects of the environment,” and that 64 percent of its survey respondents identified “air quality” as an area receiving insufficient attention.

The pollsters’ reports offer few if any clues to the frame of reference by which respondents judge the condition of their surroundings. It’s an open question how many of them experienced the environment prior to CAA enactment or how they felt it affected them.

But beyond doubt is that all six pollutants identified in the CAA as troublesome to human health and well-being have been hugely reduced since 1970 and continue trending downward, even as activities that emit them have hugely increased.

On February 20, the EPA released updated numbers showing that from 1970 through 2017, combined emissions of the six criteria pollutants decreased 73 percent. Simultaneously, the U.S. population steadily grew and the economy—including the activities that produce most of the regulated emissions—expanded by more than 260 percent.

From 1990 to 2018, the agency reported, annual power plant SO2 emissions fell by 92 percent and emissions of another criteria pollutant, oxides of nitrogen (NOX), fell by 84 percent. These reductions improve upon earlier ones achieved between 1970 and the 1990 CAA amendments. 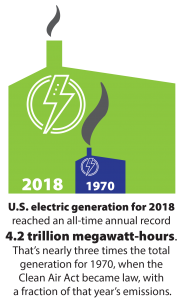 Of course, power plants aren’t the only emitters. Some regulated pollutants are released predominantly from transportation sources. Current EPA data on other criteria pollutants more or less associated with transportation show atmospheric carbon monoxide concentrations 84 percent lower than in 1980. Lead had fallen 99 percent since 1980. Ground-level ozone was at a concentration 32 percent less than in 1980. Particulate matter—depending on particle size and sampling period—had fallen 34–41 percent below 1990 and 2000 levels.

The Clean Air Act does not list carbon dioxide as a pollutant, but EPA data released in February indicates power plant CO2 emissions had decreased 20 percent since 2011 and last year were 24 percent below 2005 levels, the baseline for the Obama administration’s Clean Power Plan.

Most remarkable, in context with these emission reductions, are statistics released last month by another federal agency, the Energy Information Administration (EIA). On March 6 the EIA reported that U.S. electric generation for 2018 reached an all-time annual record 4.2 trillion megawatt-hours. That’s nearly three times the total generation for 1970, when the Clean Air Act became law, with a fraction of that year’s emissions.—Dave Hoopman