Immigrants began flooding into Wisconsin in the 1840s. Their imprint on our then-young state is still felt today, nearly 175 years later. So it’s no surprise that these immigrants brought traditions and customs from their homeland. However, what is surprising is that some communities still have such strong ties to their home countries, many decades later.

Though not a complete list, we’re sharing some of our favorite rural Wisconsin communities that take pride in their heritage and specialize in giving a taste of their homeland. We invite you to travel internationally without leaving the state by visiting these charming stops.

Located on the Great River Road on the shores of Lake Pepin, Stockholm has many delightful ties to Sweden. Settled by Swedish immigrants in 1854, this village of fewer than 100 inhabitants near Pierce Pepin Cooperative Services is quickly becoming a bustling arts destination with multiple shops and incredible Great River Road scenery.

A visit to the Stockholm Museum provides visitors with much of the town’s history. However, the museum’s mascot “Dala” now resides across the street at the Stockholm Pie and General Store. Dala is a large chicken wire and paper mache’ horse statue, fashioned and painted like the traditional carved wooden Dala horse toys, tied to Dalarna, Sweden. The Dala horse is a symbol of Sweden, symbolizing strength and courage.

Stockholm’s version of Dala was created by a group led by Stockholm native Adeline Florness for the 2005 Laura Ingalls Wilder Parade in Pepin. Eagle-eyed visitors may be able to spot the Dala symbol in other places around town. 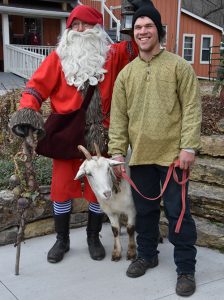 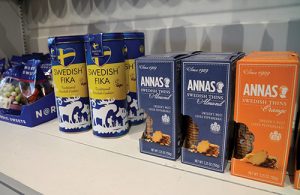 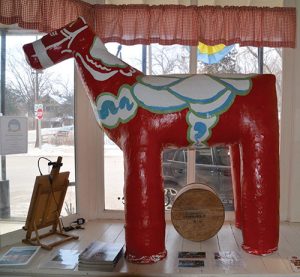 Steve Grams, an owner of the Stockholm Pie and General Store, is a welcoming ambassador for the town and wealth of knowledge about the area. Named “One of the 18 legendary pie shops in the country” by USA Today, Stockholm Pie is a must-stop on any visit. When pressed for the most “Swedish” pie on his menu, Grams suggested the Lingonberry Lemon, a sweet/tart blend of a lemon chess pie and topped with traditional Swedish Lingonberries, second only to Stockholm Apple, made with traditional Scandinavian spices.

Pop over to the general store side of Stockholm Pie to find local specialties, gifts, toys, etc. But don’t miss the Swedish specialty treats. The village is full of unique shops, brimming with local art and high-end décor. A very Nordic stop in the town is Scandihoo, a shop that dubs itself “Nordic style with a kick.”

Stockholm has its share of festivals, but the most Swedish is God Jul. This traditional Christmas celebration spans multiple weekends in December. Lit by fire dancers, luminaries, ice candles and bonfires, activities include crafts, gifts, treats, but most importantly, a visit by a Jultomte—a Swedish Santa-like gnome with his yule goat, Julbock.

Plan ahead for your visit. The Stockholm Museum, Scandihoo, and other shops around town operate on limited winter hours or only with pop-up events in March. Some will open by appointment. Visit www.stockholmwisconsin.com to plan your trip.

Worlds away yet located in the middle of the state is Iola. Norwegian heritage can be found everywhere you look here.

In the late 1870s, a sizeable Norwegian migration to the upper Midwest began. Greg Loescher, a member of Central Wisconsin Electric Cooperative, president of the Iola-Scandinavia Chamber of Commerce, and member of the local historical society, notes that settlers from Norway stopped here because the area reminded the immigrants of their homeland. The group that settled the Iola area was from Gausdal, about 150 miles north of Oslo, Norway.

“We’ve had ski jumping here since 1909,” said Loescher. “We have obvious ties to those cold-weather sports that were done in Norway and Scandinavia.”

“To keep that Norwegian influence going, our Iola Winter Sports Club has so much going on…and not just during the winter, but during the summer months, too,” he added.

“There’s been a revival in the area of people making lefse…of entire families getting together making lefse all weekend,” said Loescher. “The heritage is still there.” 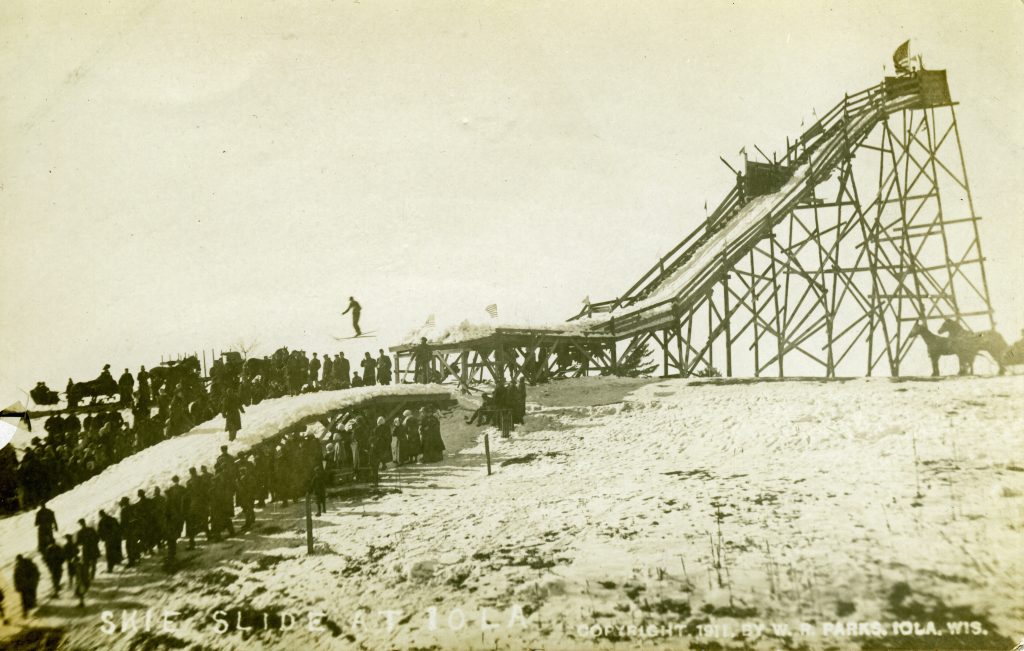 Norwegian ski jumping has been a part of Iola since 1909. Lefse is one of many traditional Norwegian foods served at the Taste of Norway & Lost Arts Fair. Greg Loescher, chairperson for the Historic Iola marker program, stands in front of the first in a series of markers citing historic moments and buildings in and around Iola. Photos courtesy of Greg Loescher 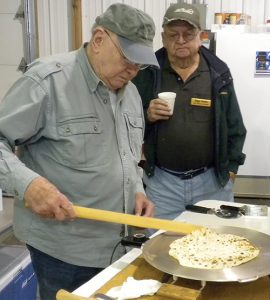 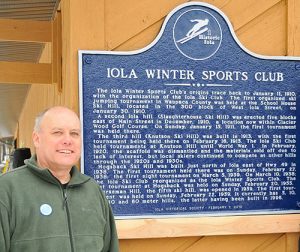 Most notable of the Norwegian sites, however, might be Vidar. The 25-foot-tall Norseman was carved by Bob “Buzzsaw” Halverson during the 2010 Iola Car Show. According to Loescher, the village cut down the branches of a tree but left the trunk in place. Using a chainsaw, Halverson carved the statue of the Viking with skis on his back to signify Iola’s Norwegian ski jumping heritage and an ax in his hands to represent the first sawmill of the area built in 1854 located nearby on the Little Wolf River.

The community held a naming contest, and the winner was clear, according to Loescher. Vidar means “tree warrior” in Norwegian, a perfect moniker for the lumberjack Viking. Recently, Vidar was cut off at the base of its trunk and is temporarily being stored inside until he can be replaced on a reinforced concrete pad, but Loescher notes that he should be back in his place this spring.

Loescher said that Vidar has a “little brother,” a smaller carving near the ski jump hill of the Iola Winter Sports Club. Also created by Halverson, his name is Ivar. He appears to be flying through the air in the stance of a traditional ski jumper.

The Iola Winter Sports Club is located 5 miles northwest of Iola on County Road MM. The Historic Iola Village complex is located at 210 Depot Street. More information can be found at www.iolahistoricalsociety.org and www.iolawintersportsclub.org.

Germans were the largest immigrant population to settle in Wisconsin in the 19th century. By 1853, one-third of Wisconsin’s population was German. German culture has maintained a stronghold in Wisconsin, namely brats and beer.

Arguably the most famous Wisconsin beer family is the Leinenkugels, who made their home and started their breweries in Chippewa Falls in 1867. Founded by Jacob Leinenkugel, an immigrant from Meckenheim, Germany, the brewery has been a family and state tradition ever since.

But that famous name isn’t the only German tie for Chippewa Falls. The city hosts Oktoberfest, to be held September 16 and 17 this year, as a family-friendly German heritage event.

“We really do try to tie back to that German heritage as much as we can and make it something that you’re not going to feel bad bringing any of your family members to,” said Tasha Weiss with the Chippewa Falls Area Chamber of the event.

“Upwards of 70% of our county population in Chippewa County recognized that they had German heritage,” said Weiss. “What a better way to celebrate that heritage than to put on our very own Oktoberfest?” 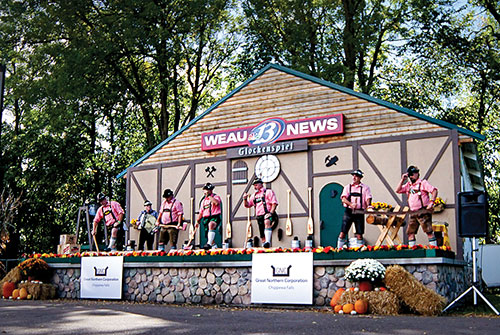 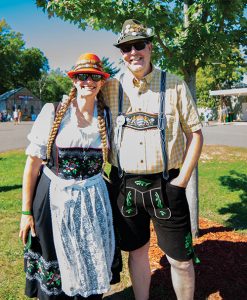 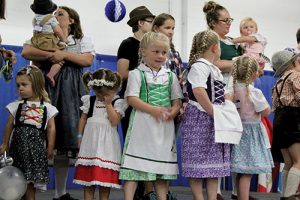 Celebrated since 2003, the Chippewa Falls Oktoberfest includes polka music, German food, competitions like stein holding and sauerkraut eating, and five stages of entertainment, including their very own Glockenspiel.

“If you’ve never seen a Glockenspiel, they are reenacting a clock. So, the act changes all the time because if it’s three o’clock, they do things three times. If it’s nine o’clock, they do things nine times. They have a couple of different skits that they do,” said Weiss. Participants in the Glockenspiel show are locals who have been involved with past Oktoberfest celebrations.

The Festmeister and Festmeisterin, the unofficial king and queen of the fest, kick off the event in front of the Leinenkugel barn with a golden keg. Then, the brewmaster uses a wagon to carry the keg to the Northern Wisconsin State Fairgrounds, where it is tapped, and the festivities begin.

One of the stages is geared towards family-friendly entertainment, including children’s polka bands, art activities, magicians, and a “kinder trachten” show, a parade of kids in traditional German costumes.

The Chippewa County Historical Society and Genealogical Society has more information about the area’s German heritage. It is open Tuesdays and can be reached at 715-723-4399. A brand new Chippewa Area History Center is scheduled to open this spring near Irvine Park. More about the Oktoberfest celebration is also available at gochippewacounty.com/oktoberfest.