Looking out over the sweeping vista from the back of the David R. Obey Ice Age Interpretive Center in the Chippewa Valley, with rolling grassland leading out to a shimmering lake surrounded by thick, towering trees, it’s difficult to imagine what this same area looked like during the period of Wisconsin Glaciation more than 12,000 years ago.

Way back then the view was surely bleaker, dominated by a massive gritty ice sheet that had been creeping down the continent for thousands of years before stopping here, depositing piles of debris and reshaping the landmass beneath it. The contrast between that image and the stunning natural scenery of today is even greater when you consider that the former is what created the latter. Had there been no massive glacier way back then, there’d be none of the resulting distinctive landmarks like the beautiful hills, gentle slopes, and lakes—lots and lots of lakes—that define this area now.

The story of this transformation is told in the interpretive center, located just east of New Auburn on Chippewa Valley Electric Cooperative lines. The center serves as a gateway to the Chippewa Moraine State Recreation Area, a state park preserving a variety of unique glacial formations and also serving as one of nine Ice Age National Scientific Reserve Units in the state.

Inside the interpretive center, visitors can explore the hands-on, interactive exhibits that teach about the impact the glacier had on the area’s landscape. Outside the building, visitors can explore the unique glacial formations themselves by way of well-marked trails, including the seven-mile Chippewa Moraine Segment of the Ice Age Trail, a 1,200-mile scenic footpath across Wisconsin that follows the general outline of the glacier’s outermost advance. 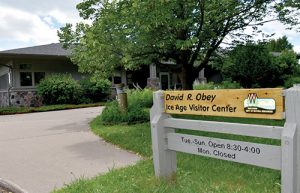 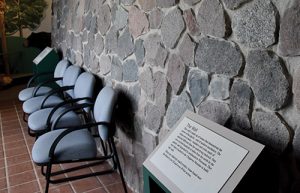 The Ice Age Interpretive Center in New Auburn is named for former U.S. Congressman David R. Obey, a supporter of the Ice Age Trail’s development. The building is surrounded by the beautiful natural landscape of the Chippewa Moraine State Recreation Area. Inside are hands-on exhibits that teach about the area’s unique geological features, including the wall of erratics, made up of large rocks that were deposited by the glacier as the ice melted.

With all the available nature activities and plenty of outdoor space to enjoy a picnic lunch, the Chippewa Moraine State Recreation Area makes for an active, educational, and fun-filled outing. To make the most of the educational part, consider starting the day at the interpretive center.

The David R. Obey Ice Age Interpretive Center is named for the former U.S. congressman whose support of the Ice Age Trail was instrumental in ensuring the reserve and the center would be a showplace of glacial history.

And a showplace it is: The building itself is an exhibit all its own. One unique element is a wall made of “erratics,” boulders and rocks that are inconsistent with the underlying bedrock because they were carried hundreds of miles by the glacier and deposited far from their place of origin as the ice melted.

The wall of erratics faces a huge picture window with a stunning view of some of the area’s distinctive glacial features. Interpretive displays throughout explain how these features were formed, and knowledgable staff is on hand to answer any questions.

Visitors will learn, for example, that the rolling moraines are the ridges formed by gravel, sand, and boulders carried by the glacier and deposited at the outer edge of its final advance; the low spots at the bottom of the moraines are known as kettles.

In addition to geological history, the interpretive center also teaches about the area’s cultural history as well as its wildlife.

“We have a lot of different exhibits that reach out to different people,” said Mady Tashini, a natural resource educator at the center. “Kids especially—we have a lot of really awesome things for them to do. We have a lot of equipment they can use while they’re here, like binoculars, and we have live animals. We let people hold our snakes and our turtles here, and the kids really enjoy doing that.”

Young visitors can also embark on a scavenger hunt, step inside a replica teepee, or try out games and competitions similar to those once played by “voyageurs”—people hired by European fur traders to transport goods and furs along waterways in birchbark canoes.

Visitors can also learn about the area’s native flowers by wandering through the rain garden, prairie wildflower garden, and fern garden just outside the building. 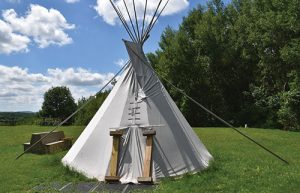 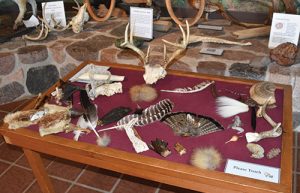 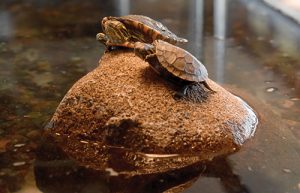 With interactive exhibits and stations inside and out, the interpretive center is a popular destination for classroom field trips. The live animals at the center, including turtles and snakes, are especially popular with younger visitors, who are allowed to handle and hold the creatures.

After taking in the displays in and around the interpretive center, visitors are well prepared to put their newfound knowledge into practice as they head outside to explore the Chippewa Moraine Recreation Area. The interpretive center is an entry point to the Ice Age Trail, but the center also has four shorter trail loops with trailheads just outside the building. 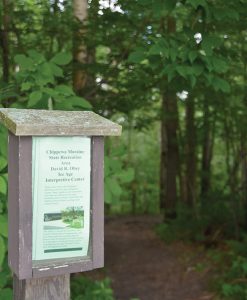 In addition to providing an entry point to the Ice Age Trail, the interpretive center has four shorter trail loops that begin and end just outside the center.

These footpaths connect to the Ice Age Trail, but there are plenty of glacial elements to discover on the loops themselves, with interpretive signs along the way that explain the science behind the scenery. Among the distinctive glacial features along the trail loops are ice-walled lake plains, formed when streams of water deposited sediment into lakes that formed on the melting glacier; as the surrounding ice melted, the lake bottoms became hilltops.

Another is an esker, a ridge of sediment deposited along the bottom of a stream running beneath the ice as it was melting. The trails also pass some of the area’s abundant kettle lakes, formed when large blocks of ice detached from the glacier as it receded and became buried in sediment, leaving a depression in the earth that filled with water as the ice melted.

Between the loop trails, which range in length from .7 to 4.5 miles and are easy to traverse, and the more challenging Chippewa Moraine Segment of the Ice Age Trail, there’s a footpath to fit all ages and abilities. Staff at the interpretive center can help guide visitors to the appropriate trail.

“We have some trail maps inside, and if you just talk to whoever is working here at the time and give us an idea of what you’re looking for, whether it’s something specific you want to see on the Ice Age Trail or if you’re just looking to go bird-watching, we can help show you where to go,” Tashibin said.

Whichever the path, it will lead to the natural beauty that a huge sheet of ice left behind.
—Mary Erickson