Have some Halloween fun at Eagle Cave 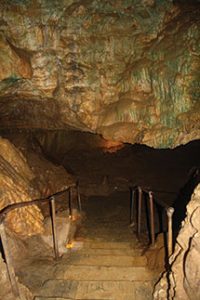 Eagle Cave in Blue River comes with a whole checklist of superlatives. As the state’s largest onyx cave, it’s a geological wonder. As Wisconsin’s first commercial cave, it’s historically significant. As part of Eagle Cave Resort in Blue River, a rustic campground tucked in the woods along the Wisconsin River, on Richland Electric Cooperative’s lines, it’s a beautiful scenic destination. And for two evenings in October, it’s very possibly the scariest cave around.

“Each year on the weekend before Halloween, we turn our real Wisconsin cave into a haunted house,” said owner Wes Hanke. “We have monsters throughout. There’ll be probably 35 to 40 spooks in there, and they’re all volunteers, so it’s an incredible thing. It’s so much fun.”

This year’s haunted cave weekend is set for October 28–29, and it’s open to anyone who wants to celebrate Halloween with a good, old-fashioned scare. Tours begin about 6 p.m. each night, and they accommodate all levels of bravery.

“We offer three levels of scare,” Hanke said. “The first level is, ‘We’re going to scare the bejeebers out of you.’”

The second level is tailored for those who are testing out their terror tolerance. Hanke explained that plenty of youngsters want to see the cave on Halloween but are unsure of the monsters hiding inside. His wife, Michelle, came up with a system where each guest is given a light-up wand to carry through the cave. 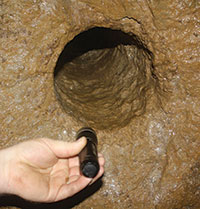 “We call those the magic wands, so the kids can carry those along with them, and if they’re in a part of the cave where they’re getting scared, they can flip their light on and every monster in that area will see the light and will not scare,” Hanke explained. “So the kids have the power to choose when they want to get scared and when they don’t want to get scared.”

The third level is the mildest. If a guest, young or old, simply wants to see the cave, he or she leaves the wand lit throughout and the monsters will not come out at all. 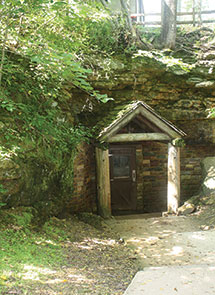 Several hundred people will pass through the entrance to Eagle Cave for the Haunted Cave weekend.

Attendance at the haunted cave has increased each of the past eight years since the Hankes first hosted it, and the visitors are not the only ones who benefit from this event. All of the proceeds earned during the two nights of haunted cave operation are donated to charitable organizations and worthy causes within the Richland County community.

“We’ve donated $26,000 to $30,000 back into the community over the eight years we’ve had the haunted cave,” Hanke said. He and Michelle choose the recipients, which vary year to year. Last year’s recipients included the Richland County K-9 Unit, Richland Center Auditorium restoration efforts, Doudna Elementary School playground fund-raiser, and the Muscoda Library.

For their efforts, the Hankes were named Business of the Year in 2016 by Richland Rejuvenates, an organization that brings together business, community, and city leaders for community betterment.

“That was just like getting a million dollars to us,” Hanke said. “We were so choked up and so proud.” 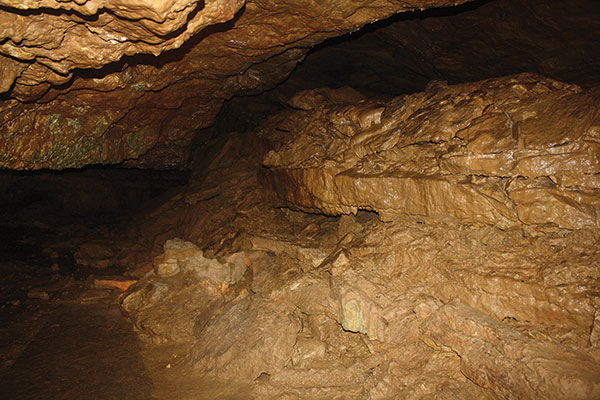 Monsters will be lurking in the nooks and crannies of Eagle Cave the weekend before Halloween.

Halloween is not the only time of year to enjoy the cave. Guided tours through the cave’s 2,400 or so feet of space are offered to the public Thursday through Sunday during the summer camping season, from Memorial Day weekend through Labor Day. Visitors have been enjoying this tour, which has changed slightly over the years as more areas of the cave have been opened up, for a whopping 78 years. 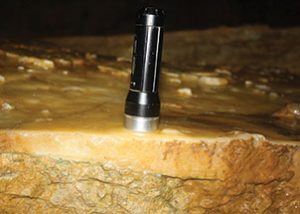 A layer of onyx is visible over the rock formations.

“Eagle Cave is the first commercial cave in the state of Wisconsin,” Hanke said. “It was opened to the public in 1938 and it’s been operating ever since. It was discovered in 1849, and Wisconsin actually became a state in 1848, which is pretty significant.”

Once Labor Day is over, the camp begins its unique cave exploratory program, which has been offering a full spelunking experience, complete with overnight camping inside the cave, to youth groups of all kinds since 1954.

“We have 300 to 350 kids here every weekend from September through April,” Hanke said. These include Boy Scouts, Girl Scouts, church youth groups, and YMCA programs, among others. Groups attend from seven different states and participate by reservation only; spots fill up quickly. Recently, university science groups have begun participating in the program as well. 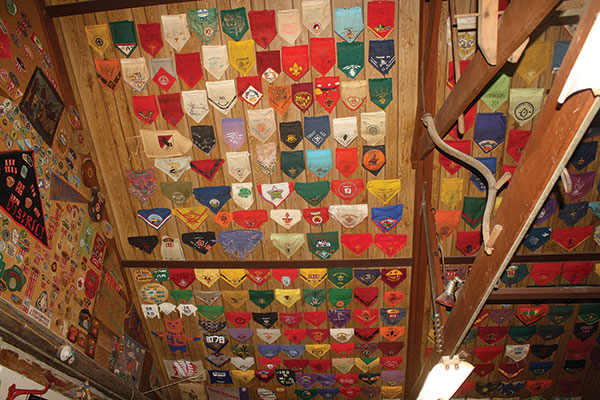 Since the 1950s, participating Scout troops have left a neckerchief and/or troop badge, displayed in the canteen. 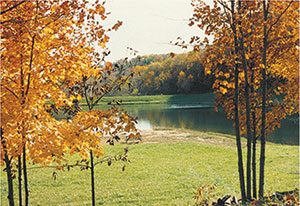 Eagle Cave Resort is a canoeing outfitter for the nearby Wisconsin River.

If Hanke seems to know every inch of the cave as if it were his own house, it’s likely because the cave is indeed home to him. Hanke grew up here; his parents bought Eagle Cave Resort in 1981, and he and his three siblings worked here while they were growing up.

After the senior Hankes retired in 2005, Wes and Michelle purchased the property and have been running it ever since, continuing the cave’s longstanding traditions and adding some new ones, like the annual haunted cave weekend. Their son, Kyle, 15, works at the campground and cave as well, as does his sister, Kaylee, 19, in between semesters at UW-Eau Claire.

For Wes Hanke, continuing the family’s business was an easy choice. “I loved it here, and I still do,” he said.

Clearly, so do a lot of others, even if the cave occasionally scares the bejeebers out of them. 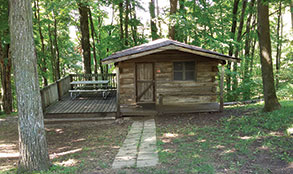