When Stacey Crass moved to rural Holcombe just over 10 years ago, she didn’t consider the effect it would have on her work-from-home sales job until she tried to sign up for high-speed internet. There were options for service that allowed for basic internet use, but nothing that met her needs.

“My headquarter office is out of Chicago,” Crass said. “We have offices around the country. We do a lot of Skype, and Webex, and Zoom meetings, a lot of large files, a lot of Sharepoint sites. I couldn’t do my job without high-speed internet.”

Crass, whose husband also works a sales job from home, joined thousands of others in rural Wisconsin whose need for internet goes beyond luxury. It’s a necessity, not just for individuals, but for economically vibrant communities of all sizes.

That’s the position Russ Falkenberg, director of IT & member services at Chippewa Valley Electric Cooperative, took years ago, when a chance meeting with the head of the Chippewa Valley Economic Development Corporation led to the creation of a cooperative partnership. Chippewa Valley Electric and Citizens Connected, the area telephone cooperative, joined together to create Ntera, a joint venture made up of the two cooperatives, to bring fiber-fast broadband to people in the underserved area. And the progression happened fast too; both boards voted to move forward with the new venture in April of 2017, construction started soon after, and the first customer was online in January of 2018.

Representatives from Chippewa Valley Electric Cooperative take part in a ribbon-cutting ceremony for Ntera in July 2018.

“The orders were coming in so fast that I took some vacation and went out with the install crew,” Falkenberg says. “It’s gotta be what it was like when they first got electricity 80 years ago. They were just ecstatic to get broadband to the point that they would bake cookies and hug you when you left. It was amazing. Absolutely amazing. And I don’t know how you capture that in writing.”

“I remember the day I got the call, Crass says. “I was standing in the grocery store and I was so excited. I posted on Facebook that it was the best day ever, and my brother laughed at me. He said, ‘Wow, Stacey, you really do live in northern Wisconsin if you’re that excited about high-speed internet!’”

According to Broadband Now, almost 12 percent of people in Wisconsin do not have access to wired broadband of 25mbps or faster, (the actual count of underserved is likely much higher due to discrepancies in federal reporting standards) and as you can expect, those left behind live almost exclusively in rural areas. 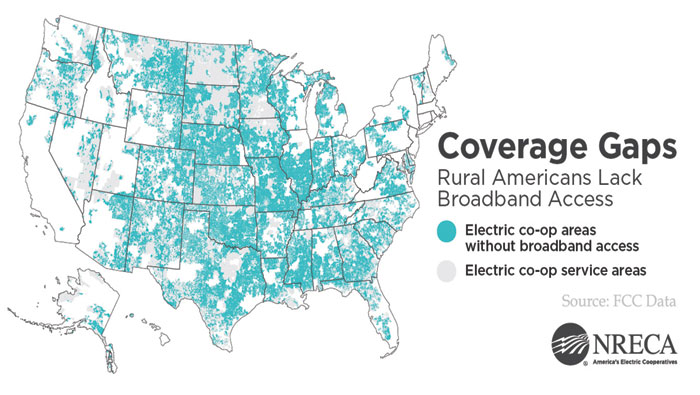 In Wisconsin and across the country, more electric co-ops are joining the effort for broadband expansion at varying rates. While there are many parallels between rural electrification in the 1940s and the need for broadband today, there are also many differences.

Shannon Clark, CEO & general manager of Richland Electric Cooperative, and chairman of the National Rural Telecommunications Cooperative, recalls his efforts to launch the consortium that became Genuine Telecom, which allowed the co-op and its partners to tap into the market when many people were still paying hundreds per month in long-distance fees for dial-up services. It was just after Thanksgiving in 1995 when internet services were launched. They projected they’d have 35 customers in the first year. They had 350 orders for service in the first month. Today, Genuine Telecom, along with seven other southwest Wisconsin cooperative- or commercially owned telephone companies, provides broadband to nearly 20,000 customers.

One Size Does Not Fit All

While entering the online services arena proved to be a win-win for Chippewa Valley Electric and Richland Electric, Clark warns that doesn’t mean it’s the right move for all electric co-ops. Wisconsin’s electric cooperatives are leaders in what they do—offering safe, reliable, and affordable electricity, and any foray outside of that mission should be done with caution.

“One of my fears, because broadband is such a loud part of the conversation right now, is that co-ops will run with this and sacrifice core competencies in areas where we have been leaders for years and years, serving our long-term electric customers,” Clark said. “Electric co-ops have to ensure they can fulfill their commitments to new customers or services without burdening electric customers, and while still being able to address other challenges in the industry such as distributed generation and carbon emissions.”

Clark also points out that while members are typically understanding and gracious when there is a power outage, internet customers are not so much, as he learned on a January day back in 1997, two months after the internet service went online and they experienced a day-long outage. “All I can say is they were not the same people,” Clark recalled. “Our customer service reps said they had never been ‘chewed out’ like that. In just two months we went from novelty to necessity. We had created an obligation.”

Still, many co-ops and community leaders recognize that high-speed internet is critical to the future of economic development of rural areas, and in many cases it won’t happen without the synergy created by partnerships and consortiums, including the involvement, on some level, of electric cooperatives.

“It’s in our nature as cooperatives to try and help solve all of our community needs—whether they are in our wheelhouse or not,” Clark said. He points out though that every electric co-op is different, so leaders must consider all of the risk factors to determine what level of involvement is right for them. To be part of the broadband expansion effort, electric co-ops don’t have to take it on alone; there are many varying options that include entering into a partnership with a telecommunications cooperative, working with the area economic development team, assisting with grant writing, writing a resolution, or allowing access to infrastructure, to name a few.

In the Chippewa Valley/Ntera area, they are outpacing all expectations, but the venture still comes with risk today, and reward down the line. Falkenberg says that at just two years in, they are performing at year-five numbers of their projections, but they are continually reinvesting so they can extend service to more customers, so actual profits are at least five years away. 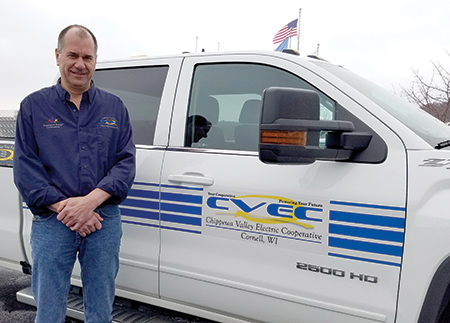 Chippewa Valley Electric Cooperative’s Russ Falkenberg likens bringing high-speed internet to rural Wisconsin with “what it was like when they first got electricity 80 years ago.”

Still, he believes, it’s worth it. “People who vacation here, stay longer,” Falkenberg said. “And they’re buying electricity while they’re here. It is capital intensive. It’s taken a lot of my time outside of work. But it’s been a really good thing and it keeps getting better.”

Dean Ortmann, Chippewa Valley Electric Cooperative president & CEO, agrees. “It’s working for us,” he said. “If you want this area to remain viable, you have to have high-speed internet.”

Back in Holcombe, Stacey Crass raves about the cooperative-level customer service that she gets as an Ntera customer, (“They’re phenomenal, absolutely wonderful!”) and admits that high-speed internet service enriches her life in many ways, particularly when it comes to visits from her three grown sons and their families, which include seven grandchildren, and also allows for streaming video and other recreational uses.

About finally having high-speed internet service, Crass says, “It just makes life so much easier and we’re so happy for what this means for us, our neighbors, and the future of the area.”