With thousands of miles of power lines, nearly 200,000 utility employees and 7,300 power plants, America’s electric grid and all its parts must work together to keep power flowing smoothly.
Photo courtesy of Dennis Gainer, NRECA

America’s electric grid is often called the most complex machine in the world. That’s not a stretch when you think about what it does: it runs your refrigerator and charges your phone, all from a ray of sunshine, a lump of coal, falling water, or a prairie breeze.

In between those starting and ending points are 160,000 miles of high-voltage transmission lines, millions of miles of low-voltage power lines, 7,300 power plants, nearly 200,000 electric utility employees, thousands of electrical substations and transformers that adjust voltage for the cross-country trip along transmission lines, then back down before it enters your house––and all these parts must work together to keep power flowing safely. In addition, this complex network is adapting to weather patterns, increasing cybersecurity threats, consumer expectations, and additional decentralized power sources like rooftop solar panels.

Those are big changes for such a vast and intricate system, “But the silver lining is that technology is available to help address that,” says Venkat Banunarayanan, vice president of Integrated Grid Business & Technology Strategies with the National Rural Electric Cooperative Association (NRECA).

For all its complexity, the electric grid can be described in three major parts: a power source (like a natural gas plant or wind turbine), the wires and equipment that deliver power, and a home or business that receives the power.

1. Resilience in the face of more severe weather

Most Wisconsin co-ops have reported a continued decline in the number of outage hours reported for their members. However, from summer storms to winter ice events, we still see weather causing occasional power outages. 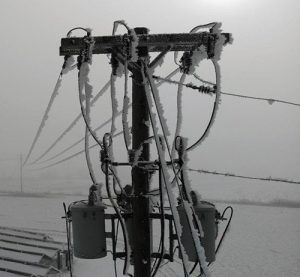 These changes call for new ways to make sure the lights stay on.

Electric utilities are increasing grid resilience by integrating weather forecasting with other smart technologies that monitor electric current and analyze how to respond. NRECA’s Banunarayanan calls this “predictive technology.”

By knowing how weather will affect power equipment, he says, “An electric co-op can pre-position work crews so they can quickly respond to the outage, and they can redirect the flow of electricity to take an alternate route to minimize the duration of a power outage.”

Cybersecurity measures have become standard operating procedure for utilities to protect against cyber attacks. (See page 11 for more about how cyber attacks can affect reliability). Electric co-ops and other utilities work closely with the U.S. Department of Homeland Security to monitor and strengthen defenses.

“Utilities are constantly improving to make sure they are more cyber-resilient,” says Banunarayanan.

Electric co-ops also urge consumer-members at home to protect themselves from hackers. When devices like printers and smart TVs connect to the internet, that actually makes them part of the electric grid.

Many utilities have voluntary programs that manage electric loads by turning off water heaters or air conditioners for short periods of time. Those programs add another layer of coordination. Members help to keep rates affordable by conserving electricity when it is most expensive during peak alerts. Additionally, many Wisconsin electric cooperatives operate community solar gardens, some with members purchasing individual panels.

4. Utilities keeping up with the change

Large fields of wind turbine farms and solar power arrays require building transmission lines to new locations, and planning for a kind of power that might only operate when the sun shines or the wind blows. These changes are necessary and helpful, but they are also expensive.

But that spending is paying off.

In 2017, Americans experienced about eight hours of power interruptions, according to the Energy Information Administration. By 2019, that was down to five hours.

“Power outages have been going down because there’s investment being made to increase the robustness of the grid,” says Banunarayanan. “I expect the reliability of the grid to increase.”