“I travel not to go anywhere but to go. I travel for travel’s sake. The great affair is to move.”
~ Robert Louis Stevenson 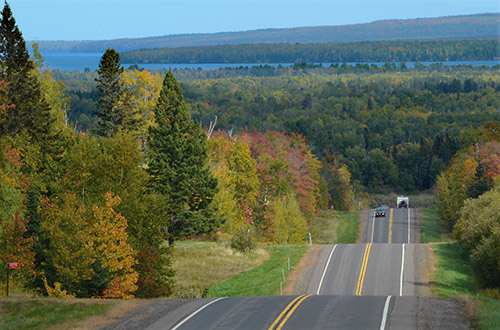 Famed novelist Robert Louis Stevenson most certainly didn’t have Wisconsin in mind when he penned the meaningful lines that appear on the opposite page. After all, he wrote them in 1878 in an account of a hiking journey he took through France. However, the sentiment of his words echoes everywhere, and they seem to especially resonate right now, with an end to a long pandemic finally, hopefully, in sight.

Wisconsin has no shortage of beautiful routes to safely travel, especially the rural roads and highways that pass through areas served by our state’s electric cooperatives. We’ve always known that, but just recently, three designations by the Federal Highway Administration have put an official stamp on it—our state has some of the prettiest drives around. 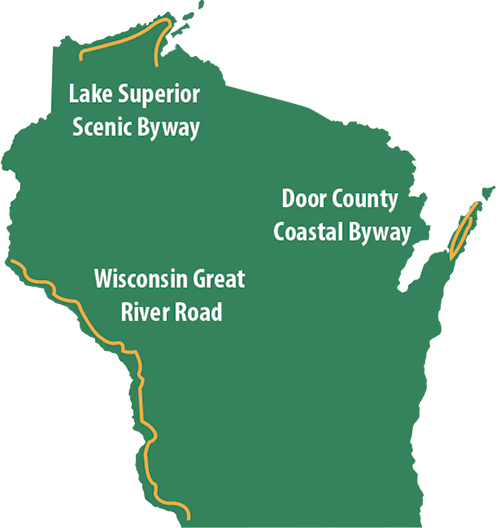 Two of those drives were named National Scenic Byways earlier this year: the Wisconsin Lake Superior Scenic Byway, a 70-mile stretch of Highway 13 along the south shore of Lake Superior, in Bayfield County; and the 66-mile Door County Coastal Byway, looping around Door Peninsula along Highways 57 and 42.

In addition, the Wisconsin Great River Road, previously the state’s only National Scenic Byway, was elevated to an All-American Road. This route follows the Mississippi River from Prescott for 250 miles, all the way to the southwest corner of the state on Highway 35.

According to the Federal Highway Administration, to be designated as a National Scenic Byway, a road must possess at least one of six intrinsic qualities—archaeological, cultural, historic, natural, recreational, and scenic—and it must also be regionally significant. To rise to the level of All-American Road, the route must possess “multiple intrinsic qualities that are nationally significant and have one-of-a-kind features that do not exist elsewhere.” An All-American Road must also be considered a “destination unto itself.”

“Wisconsin is filled with unexpected memories waiting to be discovered at every turn and these three scenic routes show off some of the best of what Wisconsin has to offer,” said Acting Wisconsin Tourism Secretary Anne Sayers in a press release. “As more travelers hit the road this year, we look forward to this well-deserved national recognition inspiring road-trippers from near and far to take in Wisconsin’s natural beauty and stretch their legs at the many restaurants, shops and recreation areas along the way.”

Drive straight through and enjoy the sights from your car, or stop at the many historic sites, scenic overlooks, interpretive displays, and museums along the way to explore the natural environment, history, and culture of each unique area. 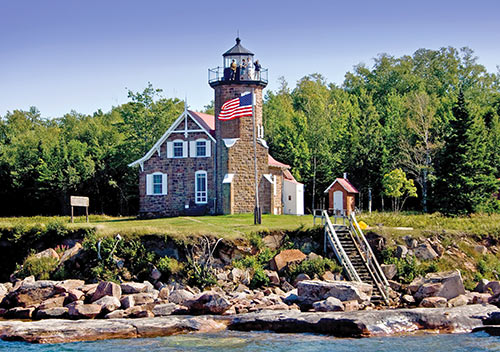 Among the many sights along this byway are lighthouses. Pictured above is the Sand Island Lighthouse, located on the northern tip of Sand Island, one of the Apostle Islands off the Bayfield Peninsula. (Photo courtesy of Bayfield County Tourism)

Following Highway 13 around the outer edge of the Bayfield Peninsula, the Lake Superior Scenic Byway’s eastern endpoint is at the Whittlesay Creek National Wildlife Refuge at the Town of Barkdale. This refuge has been designated a Globally Important Bird Area and is great place for bird-watchers to observe the many species that stop there during spring bird migration. The highway passes through several quaint fishing villages and historic communities, including Bayfield, the state’s smallest city with some of the biggest views. Bayfield is “The Gateway to the Apostle Islands,” and the highway around this city offers spectacular views of Lake Superior. A hiking trail along the lakeshore cliffs offers bird’s-eye views of the Apostle Islands just off the peninsula.

The route continues past the home of the Red Cliff Band of Lake Superior Chippewa, with many interpretive sites and opportunities to learn about the traditional Chippewa culture. 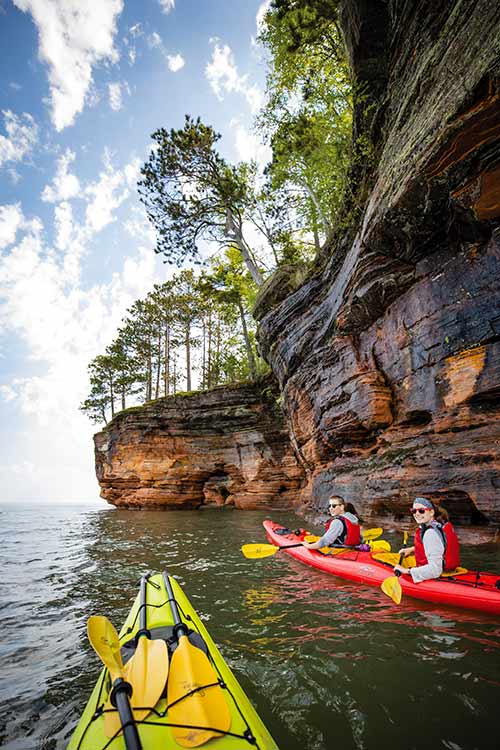 The Lake Superior Scenic Byway also passes by Bayfield, the Gateway to the Apostle Islands. This national park provides some of the prettiest kayaking around. (Photo courtesy of Bayfield County Tourism)

The aforementioned areas are where you’ll find the two national parks along this route—The Apostle Island National Lakeshore/Gaylord Nelson Wilderness Area, which includes 21 islands and the country’s largest collection of lighthouses accessible by water; and the Frog Bay Tribal National Park, with its sandy beaches, stunning views, and hiking trails.

With miles of shoreline, abundant beaches, lakes, and forest land along this route, there are plenty of opportunities to take a break for some outdoor recreation. Also, the byway meanders through some of the region’s noted rich orchards and farmland, where visitors can stop to pick up products made from the fruits that thrive in the Lake Superior area’s unique micro-climate.

The route’s western endpoint is the Brule River State Forest natural area at the Town of Cloverland, all the way to where the Brule River meets Lake Superior. This trout stream came to be known as “River of Presidents” due to its famous presidential visitors including Ulysses Grant, Grover Cleveland, Calvin Coolidge, Herbert Hoover, and Dwight Eisenhower.

This route begins just north of Sturgeon Bay on Highway 57 and extends all the way to the tip of the Door Peninsula near Northport, where road-trippers can look over the Death’s Door strait, linking Lake Michigan and Green Bay. This stretch of rough water is said to be the site of more shipwrecks than any body of fresh water in the world. You can cross it by ferry to visit scenic Washington Island, the largest of a group of islands historically known as the Potawatomi Islands just off the tip of Door Peninsula. After the ferry trip back to the mainland, scenic byway travelers backtrack to Sister Bay and then follow the path back down the other side of the peninsula along Highway 42.

The entire loop is characterized by 300 miles of shoreline and the area’s rich maritime history, with museums, shipwreck sites, and lighthouses to see along the way. Communities that line this route showcase the peninsula’s heritage, including the Town of Sevastopol, home to the largest cherry growers for which the county is known, and Ephraim, where the distinctive architecture reflects the area’s Norwegian history. 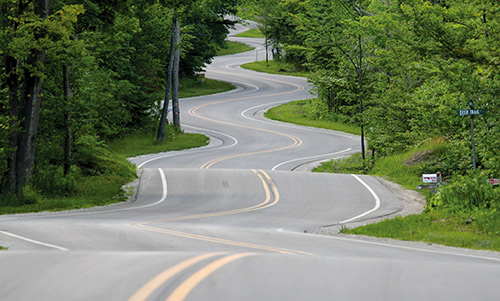 The Door County Coastal Byway includes one of the most famous stretches of
road in the Midwest, between Northport and the Washington Island Ferry Dock
at the tip of the peninsula. This portion of Highway 42 is distinguished by its
striking curves. 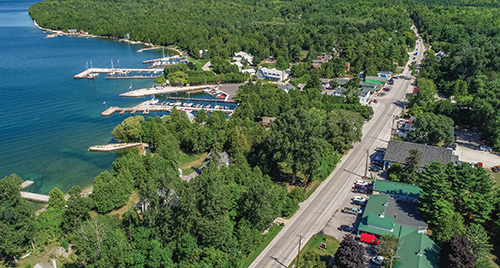 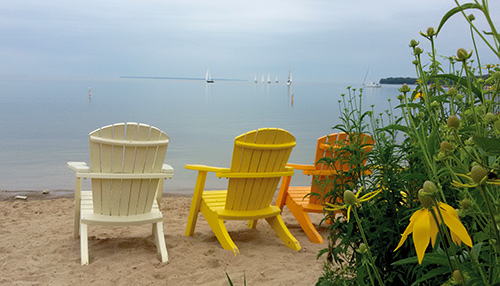 The entire length of the Door County Coastal Byway offers plenty of places to stop
and take in the peaceful surroundings, such as this sandy beach at Egg Harbor.

Beautiful natural scenery abounds up and down this scenic byway. Baileys Harbor has acres of protected wetlands and wilderness. Time your trip for a little later in spring for a chance to take in the beautiful orchids that bloom in late May or early June at the Ridges Sanctuary.

Three state parks along this route offer peaceful pit stops and opportunities for outdoor recreation. Peninsula State Park, with its eight miles of shoreline along Green Bay, has a land-accessible 1850s lighthouse and the White Cedar Nature Center. Potawatomi State Park is thick with forests and offers panoramic views of Green Bay. On the other side of the peninsula, on the rugged Lake Michigan shoreline, is Whitefish Dunes State Park, with rocky and sandy beaches and the highest sand dunes in the state. 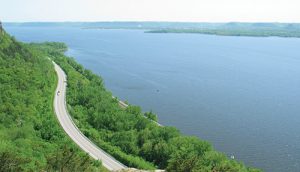 The Great River Road traces the Mississippi River for 3,000 miles from northern Minnesota to the Gulf of Mexico. Wisconsin’s portion begins in Prescott and follows the river south for 250 miles. This view was captured from the towering bluffs at Maiden Rock. (Photo courtesy of Visit Pepin County)

The Wisconsin Great River Road follows Highway 35 along the Mississippi River through 33 historic towns and villages, with stretches of open road winding between the river and towering limestone bluffs. The route passes through communities and landmarks that showcase a wide range of cultures and heritages, including the Dakota, Chippewa, and Hopewell peoples; early French voyagers; and Swiss, German, French, Italian, and Swedish settlements. These diverse cultures have one common theme: The Mighty Mississippi was of great importance to each.

Six Great River Road Interpretive Centers along the route help explain the river’s impact on each culture in areas including transportation, commerce, and industry. The first interpretive center is in Prescott, the northernmost end of the Great River Road. 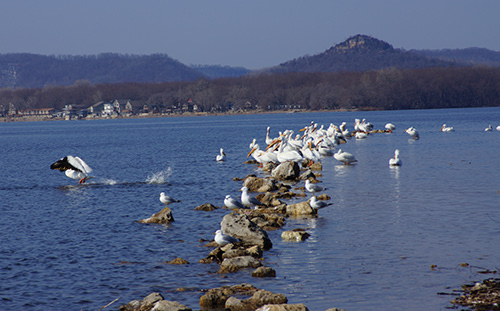 As they are all located on waterways, Wisconsin’s nationally acclaimed byways are great places to take in the spring bird migration, as songbirds make their way back south and waterfowl return to the thawing shorelines. (Photo courtesy of Visit Pepin County)

Traveling south, the road winds around the widest expanse of the Mississippi River known as Lake Pepin, past the distinctive Maiden Rock Bluff and through unique river communities. Those include Stockholm, founded by Swedish immigrants, and Pepin, birthplace of famous author Laura Ingalls Wilder.

Further along, travelers pass through Alma, a must-stop for bird-watching, and Fountain City, known as the River Bluff Capital of the World thanks to Eagle Bluff, the highest point on the Mississippi at 550 feet above the river.

Historical sites along the way include the Fort Crawford Museum in Prairie du Chien, once the center of the French fur trade along the Mississippi, and Stonefield State Agricultural & Historical Site in Cassville, the former estate of Wisconsin’s first governor, Nelson Dewey. 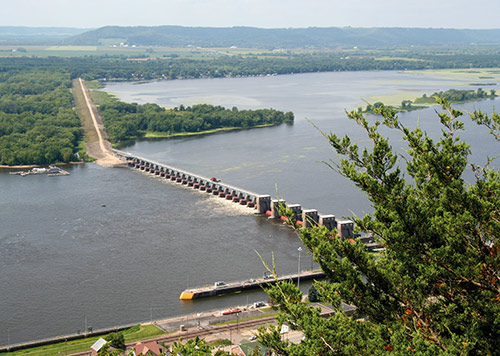 Lock and dams up and down the river make for scenic views and also demonstrate the Mississippi River’s importance in terms of transportation and commerce. Lock and Dam 4 in Alma (pictured above) has a viewing deck where visitors can watch barges pass through.

While some sites may be closed or have limited hours due to the pandemic, there’s no shortage of things to safely do.

State parks along this route include Nelson Dewey State Park in Cassville, with an overlook offering a majestic view of the river and a great place to watch bald eagles; Perrot State Park at Trempealeau, with a view of Trempealeau Mountain, one of only three solid rock islands along the Mississippi River; and Wyalusing State Park south of Prairie du Chien, overlooking the confluence of the Wisconsin and Mississippi Rivers.

With all there is to see and do along each scenic byway, you can easily plan a full itinerary and turn a road trip into a complete vacation. Equally satisfying is to just start driving and see where the road takes you. It doesn’t matter which direction you choose—as Stevenson so eloquently put it, the great affair is just to move.—Mary Erickson