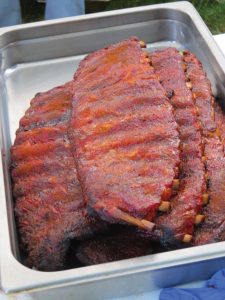 If you head to Washington Island at the end of the month, you’ll be lucky to find yourself at Death’s Door. And that is good luck that we’re talking about. Heaven is waiting for you here, especially if you’re a barbecue lover.

Over the weekend of August 25 and 26, several thousand people are expected to take the brief ferry ride across the strait to Washington Island for the sixth annual Death’s Door BBQ. As the numbers suggest, this is no ordinary backyard barbecue party. Death’s Door is a serious barbecue competition, sanctioned by the Kansas City Barbeque Society (KCBS). Some of the best barbecue chefs in the country will be competing at this year’s event, producing mouth-watering meats for some substantial prize money and a whole lot of pride.

Fortunately for the spectators, many of these renowned chefs will also be producing for visitor consumption. 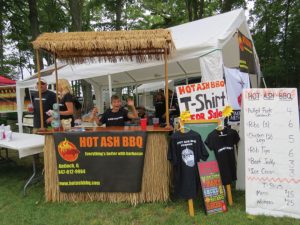 Many of the competing teams will also be selling samples of their barbecue.

“A lot of competitions are strictly contests, held in a park somewhere, but ours is a whole event with live music all day, kids’ games, and lots of food,” said Richard Jepsen, coordinator of the event and a certified barbecue judge himself. “One unique thing we have is that we’ve got about a quarter of the teams that will be selling their meat right at the site. They come up with some pretty interesting concoctions, like a barbecue parfait with mashed potatoes and baked beans in a big cup. Everybody does it a little different.”

Jepsen isn’t just speaking from hometown pride when he says Washington Island puts on a great show; he’s judged enough competitions throughout the country to know a good barbecue event when he sees one. Jepsen became a certified judge about 10 years ago after passing the required course in Kansas City. Just recently, he earned the title of certified master judge, which is attained after judging 30 KCBS-sanctioned contests, cooking with a team, and passing an extra exam. It’s a lot of work, but Jepsen admits it’s not a bad gig for someone who loves barbecue.

“I also just recently became a state-certified steak judge, so I get to go around and eat steaks, and that’s pretty nice too,” he chuckled. 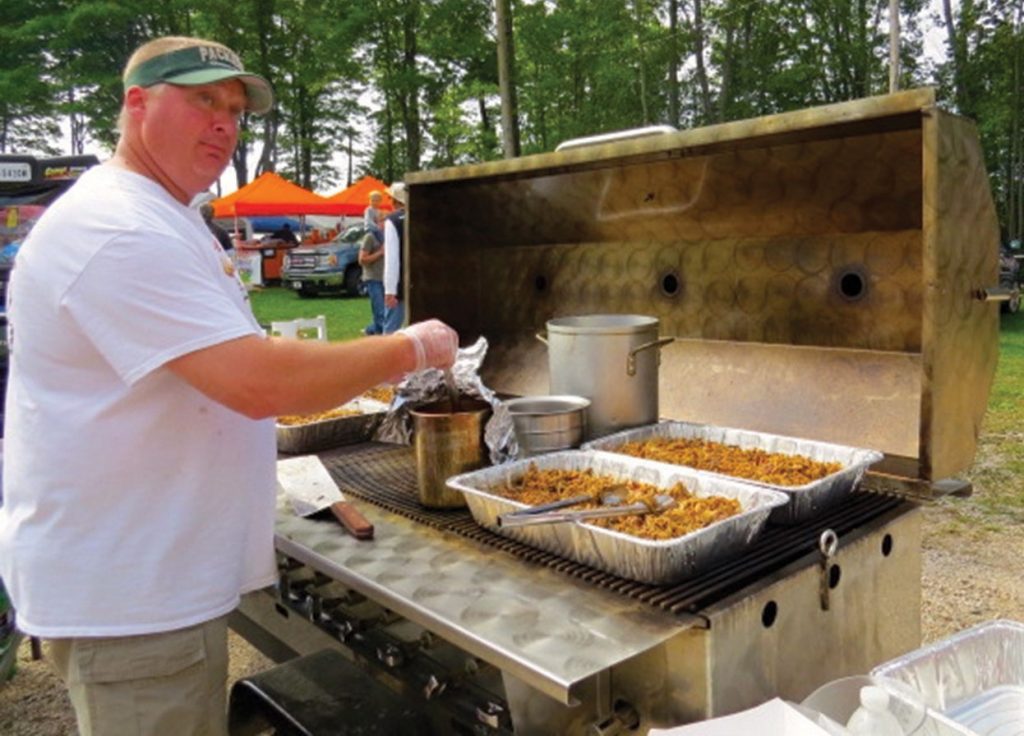 Washington Island’s Death’s Door BBQ is one of nearly 300 barbecue competitions nationwide sanctioned by the Kansas City Barbeque Society, billed as the largest society of barbecue enthusiasts in the world.

As Jepsen began traveling to various places judging different KCBS-sanctioned competitions, he got to wondering why a similar event couldn’t succeed at Washington Island. Located just beyond the tip of the Door County peninsula, the island offers a unique destination for competitors and spectators who want to make the contest a mini vacation. Washington Island also has a tight-knit community of about 700 year-round residents who pull together to put on an event of this magnitude. 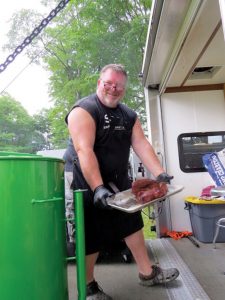 “The barbecue is held at the airport, which is one of the best places to hold it simply because we have primary lines that run right through those grounds,” explained Robert Cornell, manager of Washington Island Electric. “So we hung a couple of new transformers and upgraded a couple of existing transformers, and we built quite a large number of temporary services in order to power all these rigs.”

It takes the co-op crew about two days before the event to set up the temporary services each year, and another full day to break it all down. 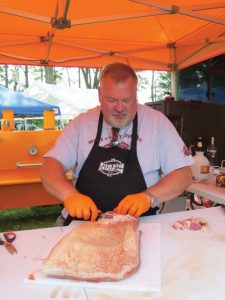 The efforts have not gone unnoticed; the inaugural Death’s Door BBQ was a resounding success. Cornell said organizers were hoping to attract about 500 to 700 people that first year, but the final count was about 2,500. The first event also got positive reviews from the seasoned chefs and judges, who have seen their share of competitions and therefore appreciate a smooth operation with reliable service.

“We’ve had a number of them tell us that we have one of the best set-ups that they’ve had,” Cornell said. “Some of these chefs bring generators with them when they travel to competitions, but they don’t bring them to Washington Island because they know they won’t need them.”

Jepsen agreed: “The word is out that we’ve got a great contest. We treat the judges and the cooks well. The whole island gets behind it and the people love it.” 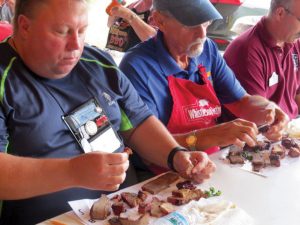 The numbers confirm Cornell and Jepsen’s statements, as the event has grown steadily each year. This year, Jepsen said registration for the maximum 42 teams filled completely by early March, with nine other teams on a waiting list. Judging spots are also coveted; Jepsen said 160 people had signed on hoping to judge this year’s Death’s Door BBQ by March.

To better accommodate both participants and spectators, organizers expanded this year’s Death’s Door BBQ to two days, with the first day dedicated solely to competition and the second day open to the public. The event is also now the final contest of the Wisconsin Trifecta, a series of three KCBS-sanctioned barbecue competitions, with the others held in Appleton and Green Bay. Jepsen explained the top 10 teams that compete in at least two of the three Wisconsin Trifecta events are eligible for additional prize money.

The competition at this year’s Death’s Door BBQ will include teams from 10 different states, with some of the best professional barbecue chefs in the country among them. However, you don’t have to be a professional to enjoy this event. This is a great place for backyard barbecue enthusiasts to pick up a few tips from the pros.

“People can talk to the teams and ask them questions,” Jepsen said. “You can always pick up some tips and different things to try.” 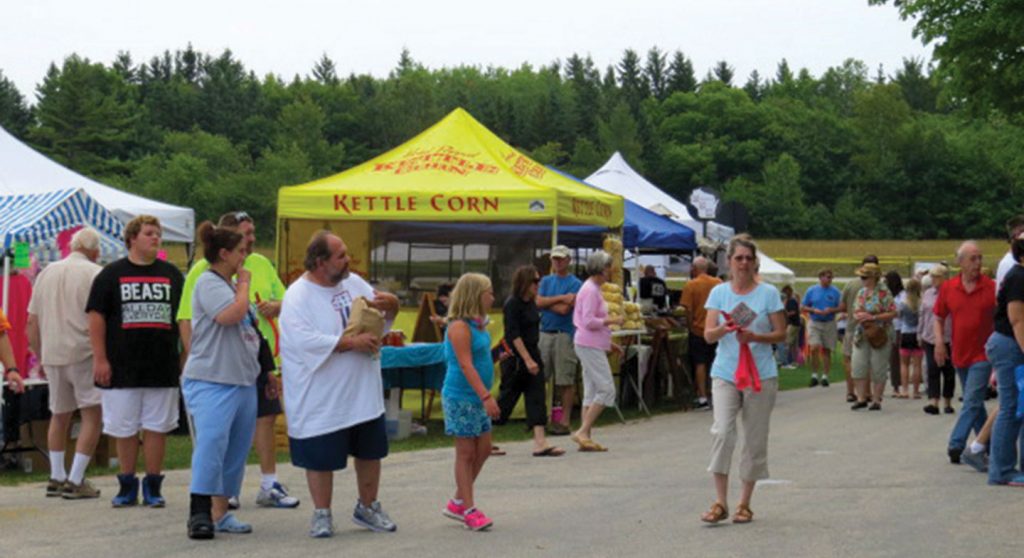 In addition to savoring the barbecue samples, visitors can stroll among 20 vendors offering other local products. 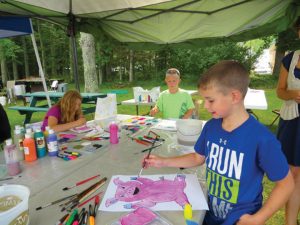 Special activities for children will be available at the Washington Island Art and Nature Center.

Transportation will be made easy with the BBQ Train, a service that will be made available by the Washington Island Ferry Line for those visitors who choose not to take their cars on the ferry across the strait to the island. The ferries will be journeying back and forth continuously all day, with the BBQ Train providing rides from the ferry dock on Washington Island to the airport every half hour throughout the Death’s Door BBQ festivities.

It’s the perfect way to get a taste of Washington Island—a really good taste.—Mary Erickson

Death’s Door BBQ will be held at the airport on Washington Island August 25 and 26. Saturday’s festivities are open to the public and begin at 10 a.m. To get there, follow Highway 42/57 north from Sturgeon Bay to the ferry dock at the northern tip of Door County Peninsula. For more information, visit www.deathsdoorbbq.com or call 920-847-2179.