NRECA is the nationwide electric cooperative trade association and every spring, leaders from co-ops across the United States gather for a few days in our nation’s capital for informational briefings and face-to-face meetings with members of the Senate and House of Representatives and their staff people. This year some 2,000 leaders participated, including more than 60 representing virtually every electric cooperative in Wisconsin.

We focused on three primary issues in meetings with our elected representatives. The first was support for robust rural development programs in the 2018 Farm Bill. We support enhancement of key rural development efforts including the Rural Economic Development Loan and Grant (REDLG) Program administered by the Rural Utilities Service. This low-interest loan program is exceptional among federal government activities in that the reliable repayments from participating cooperatives are a net plus to the treasury’s bottom line.

A second issue is creating a healthy investment in fiscal year 2019 appropriations for rural broadband that would help improve internet service in rural Wisconsin. Agriculture Secretary Sonny Perdue addressed the assembled cooperative leaders and asserted that broadband deployment could bring about a “seismic shift” in rural economic development.

Our final lobbying issue this year is one you’ve heard about before, and it is significantly relevant to the ability of electric cooperatives to attract and keep quality employees. Most Wisconsin electric cooperatives participate in NRECA’s Retirement Security (RS) Pension plan. Congress has recognized that pension plans like RS pose virtually no risk of default: RS is not underfunded and it counts more than 880 rural electric cooperatives as participants. The plan covers more than 56,000 employees in 47 states, including almost 1,300 here in Wisconsin. These employees are a primary reason why we have safe, reliable and affordable electricity. 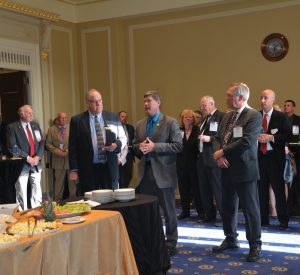 Unfortunately, the Pension Benefit Guarantee Corporation (PBGC) persists in treating the RS program as if it were risky. It treats the individual electric cooperatives in this defined-benefit, multiple-employer pension plan as if they were a single entity that might go out of business all at once without warning. The PBGC applies its rules to these 880 electric co-ops based on two assumptions: that they should be considered a single employer, and that they’re no different from for-profit companies.

Those assumptions—both wrong—result in Wisconsin electric cooperatives paying premiums 87 percent higher than they ought to be. This strains their ability to maintain the employee benefit and complicates the recruitment of new workers. Fortunately Representatives Ron Kind, a Wisconsin Democrat and Mike Kelly, a Pennsylvania Republican, have developed bipartisan legislation to remedy the unfairness. Wisconsin’s third congressional district is home to 44 percent of the state’s electric co-op member-owners, who comprise 32 percent of Congressman Kind’s constituents. He’s been recognized by the NRECA for his work toward an equitable resolution of the pension issue.

The two proposals—H.R. 3596 and H.R. 5282—sponsored by Kind and Kelly would save Wisconsin co-ops almost $738,000 every year without additional risk to the PBGC. The co-op pension proposals also have bipartisan support from Wisconsin Representatives Glenn Grothman and Mark Pocan as cosponsors.
When you see any of these representatives, please thank them on behalf of your co-op and its employees. And if your congressman isn’t one of them, please ask for their support for fair treatment of co-op pension plans. It would help to properly compensate and retain the highly trained and qualified employees who keep our lights on.