Levis Mound Recreational Area has the inside track on outdoor fun. With miles of groomed trails that loop through the Clark County Forest, Levis Mound is one of the premier trail systems for mountain biking and its fast-growing offshoot—fat-tire biking—in the Midwest. 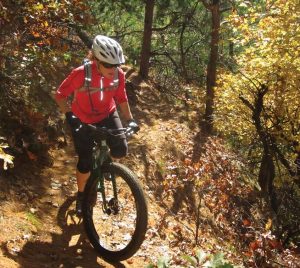 You needn’t be a cyclist, however, to enjoy this area. Of its more than 34 miles of trails, 25 are single-track trails for mountain biking while others are devoted to hiking, cross-country skiing, and snowshoeing, depending on the season. All offer spectacular views and unique pathways, thanks to the three colorfully banded sandstone mounds that distinguish the area’s terrain.

Located at the edge of the Driftless Area in the southwest corner of Clark County, Levis Mound is marked by the elevations created by mounds of earth—officially known as nunataks—that rose above a sea of ice during the state’s Glacial Stage some 15,000 years ago.

“The unique thing about this trail system is the mounds,” said Steve Meurett of the Neillsville Area Trails Association (NATA) and a member of Clark Electric Cooperative. “We’ve got trails that go up and down them, around them, we have a lot of scenic overlooks, and we have flat areas between them. The ski trails go up and down them too. That’s very unique for Wisconsin; there’s no other trail system like it that has that kind of terrain.”

Levis Mound has trails of all levels, with some advanced loops featuring steep climbs and sudden drops while beginner and intermediate loops remain flat near the base of the mounds. Twice-yearly bike races, including February’s Sweaty Yeti, one of the region’s first fat-bike races, attract cyclists from all over the Midwest. These events also serve as fundraisers to help cover maintenance costs for the trail system.

It Started with Skis

Levis Mound Recreational Area grew into one of the top mountain bike trail systems in the region from fairly modest beginnings. Meurett said the area initially had only a few lightly developed cross-country ski trails. In 1987, he and a group of other outdoor recreationists who used the ski trails saw the area’s potential for mountain biking, a sport that was just starting to take off in popularity. With the county’s approval, the group began building, on a volunteer basis, single-track trails for biking. The group of volunteers, which evolved into NATA, added more trails each year, both for biking and skiing. 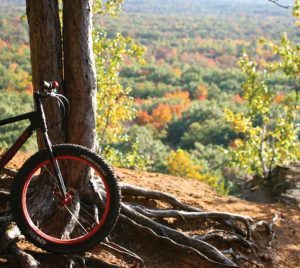 The advent of fat-tire biking—which utilizes wider tires that will move along packed snow without breaking through the surface—brought even more opportunities. NATA volunteers began grooming some of the mountain biking trails for winter use, making Levis Mound among the first trail systems in the state to offer groomed fat-tire bike trails. The sport was so new that there was no standard grooming equipment for fat-bike trails, so the group worked with a fabricator in Neillsville to design a groomer that Meurett said is now widely used in the fat-biking community.

“Fat biking has really taken off over the past 10 years,” he said. “I think part of the reason is if you’ve got poor snow conditions or the weather isn’t good, you can still go out and fat bike. Skiing is a little more difficult if you’ve icy conditions or melting, but fat biking can still go on. That’s really increased the visitors on our trails.”

These days, Meurett said on a typical winter weekend Levis Mound will have as many fat bikers as skiiers. NATA maintains separate trails, specifically groomed for each activity.

Snowshoeing is another activity that Meurett said has grown considerably in popularity over the past decade. Snowshoers are welcome on both hiking and biking trails at Levis Mound. New for this winter, NATA volunteers are developing loops specifically for snowshoers that will take them to the top of the mounds.

A Bigger and Better Building 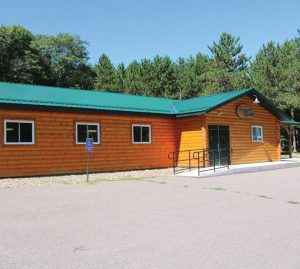 Loops and trails are marked throughout the recreation area, but visitors can also pick up a map at the chalet located at the Levis Mound trailhead, another development brought in large part by NATA’s volunteer efforts.

An early NATA project was moving the Levis Mound trailhead to its current location on Fisher Road, which had open space adequate for ample parking and some added amenities. Working in partnership with the county, the organization raised money by sponsoring mountain bike races to build a ski chalet at the site, providing bathrooms and a place to warm up. The chalet burned to the ground in 2015 and NATA went to work once again raising funds to replace it with a slightly bigger, and much better, building. 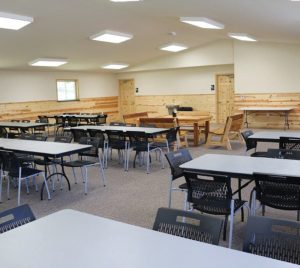 The new chalet, opened last fall, is served by Jackson Electric Cooperative and maintained by the county forestry department. The building stays toasty warm with an in-floor heat system, and it provides bathrooms and hot showers.

“The new building is much better than the original,” Meurett said. “It’s more energy efficient and it’s just much nicer.”

Visitors may purchase trail passes for biking or skiing at self-service kiosks located at the trailhead. In addition, yearly trail passes, multi-sport passes, and family passes are available. No trail fee is required for hiking or snowshoeing.

Whether you plan to bike, hike, trek, or ski, Levis Mound will put you on the right track.—Mary Erickson