Americans keep getting more efficient in their use of energy, a trend that’s even powered its way  through the pandemic.

Experts are starting to publish energy statistics gathered from 2020, a year that seemed to upend every part of our lives, and energy was no exception.

Last year saw a 7% drop in energy use in the U.S., the largest annual decrease since those figures first started being collected in 1949, says the Department of Energy’s Energy Information Administration (EIA). EIA attributes much of that decrease to the economy’s reaction to the coronavirus. 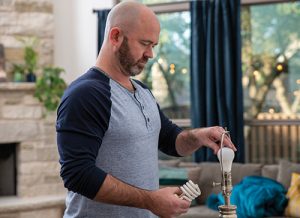 Use of highly efficient LED bulbs has grown from a 20% market share in 2015 to 60% in 2019—and that trend won’t be reversed since LEDs last well over 10 years. Photo Source: Scott Van Osdol

Energy consumption didn’t just drop––it shifted as well. Commercial energy use fell dramatically as people stayed home from the office. Residential use rose because, of course, people stayed home from the office. People even slept later—some areas reported peak morning electricity use moving from around 6 a.m. when people would normally shower and make breakfast before leaving the house to go to work. Instead, energy use peaked at times later in the day as people simply walked from their kitchen to their home office.

Will people decide they prefer that kind of commute in their socks even after the coronavirus concerns return to normal? Or will they be even hungrier for in-person meetings?

The 2020 statistics don’t offer a lot of guidance on that kind of speculation. But the specialists pouring over those figures do draw some conclusions: new, more energy-efficient uses of technology may change some of our energy use patterns, and the overall trend to energy efficiency will likely continue.

That forecast for the next 30 years comes from a new EIA report, Annual Energy Outlook 2021. The overall message is that energy efficiency improvements are baked in to our everyday lives. While the report projects energy use will not completely return to 2019 levels until 2025, it “does not project long-term structural changes in electricity demand resulting from the pandemic.”

And if the pandemic hasn’t permanently changed the long-term structure of the energy industry, the report says it also won’t affect the march toward greater efficiency.

Here’s a partial list of why the EIA says the U.S. will keep getting more energy efficient: “Currently established increases in efficiency standards, building codes and incentives lead to energy efficiency improvements, especially those attributed to energy management controls and sensors associated with space heating, … changing technology, behavior and policy that affects energy efficiency in vehicles, end-use equipment and lighting.”

EIA says these factors extend beyond the uncertainty resulting from the COVID-19 pandemic.

So, as you and the rest of the world sort out how many meetings will be forever replaced by Zoom calls, we can count on continued improvements in motor vehicle fuel economy, lighting, building codes, and other energy-saving measures that will keep going long into a post-pandemic world.