All Wisconsin high school students and current college freshmen (2019–2020), whose primary residence is served by an electric cooperative, are eligible to enter the 2020 WECA Essay Contest, which offers cash scholarships for the top three winners. The essay contest is usually open exclusively to attendees of the Youth Leadership Congress, but that event has been cancelled this year, due to the pandemic.
Students interested in entering the contest must submit a 600 to 1,200-word essay in response to a question related to electric cooperatives and youth involvement. A panel of three judges will review the essays and select the top three winners, who will be awarded scholarships of $1,000, $500, and $250. Entries must be postmarked by August 26, 2020. For more information, contact Tina Walden at tina@weca.coop. 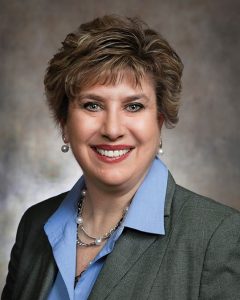 Former Senate minority leader Jennifer Shilling joined Dairyland Power as government relations manager. Shilling announced in April she would not seek another term, and resigned from her seat in May, following two decades in state legislature.
“Dairyland is pleased to add Jennifer Shilling to our government relations team,” said Barbara Nick, president and CEO. “Jennifer’s record of service to the people of western Wisconsin is well known, including her positive, proven ability to work with lawmakers of both parties. Those capabilities will be an asset to Dairyland’s cooperative membership, as we continue to work for safe, sustainable and reliable power in our four-state service area.”
Shilling served 20 years in the state legislature, including serving as Senate minority leader since 2015.

West Riverside Energy Center is Up and Running

A new 730-megawatt combined-cycle, natural gas generating station near Beloit is officially in service. Adams-Columbia Electric, Central Wisconsin Electric, and Rock Energy Cooperatives are joint owners of the plant with Alliant Energy. As joint owners, the co-ops own capacity and receive a capacity credit.
“Although we operate independently in procuring our wholesale power, this project demonstrates the benefits gained from electric cooperatives working together,” said Mike Wade, president and CEO of Central Wisconsin Electric Cooperative. “Our level of ownership in the new plant will benefit our members by lowering our overall wholesale power cost. We have made a significant investment in the West Riverside Energy Center, but the return will be reduced power costs for our members for many years to come.”
The station is capable of producing enough power for more than 550,000 homes.

Managers of 70 electric cooperatives across the country, including Pierce Pepin Electric Cooperative, are working with some senior house lawmakers in pushing a bill that would expedite the effort to close the gaps in broadband service.
House Majority Whip James Clyburn (D-South Carolina) and Fred Upton (R-Michigan), former chairman of the House Energy and Commerce Committee, have authored a bill to release $16 billion in funding which the Federal Communications Commission is planning to award starting this fall. Specifically, the FCC would be directed to take action to speed up the Rural Digital Opportunity Fund Phase I auction and immediately fund shovel-ready, high-speed internet projects providing consumers with broadband access within a year. Rep. Ron Kind (D-Wisconsin) has signed on as a co-sponsor.
In an open letter to Congress, managers of the electric cooperatives, including Nate Boettcher of Pierce Pepin Electric Cooperative, wrote: In these uncertain times, one thing is certain. The world is interconnected in many ways, and the future of information, education, work, health care, social connection and entertainment are all tied to broadband internet access. The COVID-19 crisis accentuates a point we have known for some time. For our kids to have the same educational opportunity, for our young adults to find work without moving away from the community, for our elderly to receive quality health care, rural America needs fiber broadband service.

A former board member of the Federated Youth Foundation has been selected to serve on the Governor’s Blue Ribbon Commission on Rural Prosperity. Gina Tomlinson, CEO of Cochrane Co-op Telephone  Company, will serve on the 12-member commission, which will develop long-term strategies on how Wisconsin can best support the needs of rural communities.

Other commission members include:

The commission is expected to hold listening sessions around the state later this summer.

The Iowa Utilities Board this week approved a petition for the Cardinal-Hickory transmission line to run through the Iowa counties of Clayton and Dubuque, en route to Wisconsin.
Dairyland Power Cooperative, American Transmission Company, and ITC Midwest are building the 102-mile, 345-kilovolt line that will extend from Dubuque, Iowa, to Middleton. The Wisconsin Public Service Commission unanimously approved the project plan in September.
The $492 million project is expected to offer economic savings, improve reliability, and relieve congestion on the grid, which will allow for expansion of solar and wind projects.