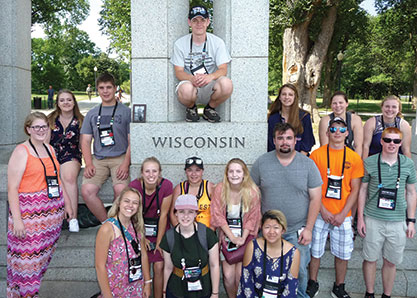 Wisconsin delegates to the 2017 National Rural Electric Cooperative Association Youth Tour cluster by their state’s pillar at the World War II Memorial on Washington, D.C.’s National Mall. This year’s June 9–15 event drew more than 1,800 teens from across the country to the nation’s capital and featured a week-long schedule of cooperative workshops, meetings on Capitol Hill, and touring national memorials and historic sites. The 16 students from Wisconsin were sponsored by 10 of the state’s electric co-ops and marked a record number to participate in the annual conference.

House okays utility wildfire protections
Electricity providers would gain freedom to bypass red tape when it impedes clearing vegetation that presents a wildfire hazard on federal lands, under legislation approved 300-118 by the House of Representatives in June.

The bill also creates liability protection for power providers whose efforts to clear fire hazards are stalled by federal agencies. In visits to congressional offices this spring, co-op leaders from Wisconsin and other states raised the issue of months-long delays in obtaining permits for line maintenance work on federal land.

In 2003, deficient vegetation management by an Ohio utility—not on federal land—was identified as the cause of a blackout affecting eight states and part of Canada and running up billions of dollars in economic losses.

Plagued by cost overruns, carbon capture project dropped
Mississippi Power and its parent Southern Company at the end of June halted lignite gasification activities at their Kemper County plant. However, they continue producing electricity from natural gas pending a decision from the Mississippi Public Service Commission on recovery of the facility’s multi-billion-dollar cost overruns.

Days earlier and pushing for settlement on cost-recovery plans, commissioners said the utilities should abandon the delay-plagued coal gasification and carbon
capture aspect of the project.

At the end of last year 448 reactors were operational worldwide, a net increase of seven compared with the beginning of the year, the association said.

Dozens more are on the way, with 61 new reactors under construction, the report said. Four of those are in the United States, where six plants have been retired in the past seven years, according to the report.

Cease-fire signaled on restructuring
A campaign that began roughly a year ago to revive retail electric restructuring in Wisconsin appears to have been finally put aside.