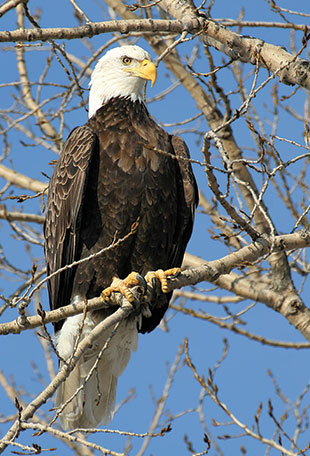 You don’t have to be an avid bird watcher to ﬁnd yourself drawn to the sight of a bald eagle soaring overhead. There’s just something about the national bird that stirs feelings of wonder and reverence. Fortunately for us in Wisconsin, you don’t necessarily need an eagle eye to ﬁnd these majestic birds. They appear in abundance along the Mississippi River and are easy to spot, especially in the winter as they gather along the river corridor to feed.

A prime place to spot eagles is in the village of Ferryville, in Crawford County and within Scenic Rivers Energy Co-operative territory. Ferryville is located at the widest point of the Mississippi, near one of the pools that are created on the river upstream of a lock and dam complex. Both of these characteristics make for some prime feeding areas that attract large numbers of eagles.  In fact, a yearly count of eagle nests has shown that Ferryville’s Pool 9 has the largest concentration of active eagle nests than anywhere else in the continental United States, according to the U.S. Fish & Wildlife Service.

With such a healthy population of birds, Ferryville is a great place for eagle watching at any time of the year. It’s even more rewarding, however, to plan a trip in March to coincide with the village’s annual Bald Eagle Watching Day, a family-friendly event ﬁlled with fun activities and educational programming that make an eagle-watching venture more meaningful. Held this year on March 7 at the Ferryville Village Hall, Ferryville’s Bald Eagle Watching Day is sponsored by the Ferryville Tourism Council and Friends of Pool 9. 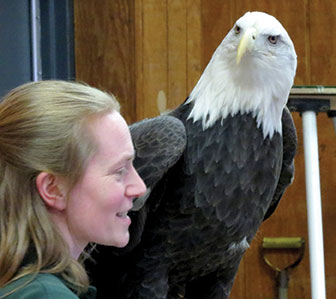 A highlight of Ferryville’s Bald Eagle Watching Day is the live eagle program present- ed by the University of Minnesota Raptor Center. The program is free, but seating is limited, so plan accordingly. (Photo courtesy of Ferryville Tourism Council)

Unlike other eagle-watching gatherings that are typically held earlier in the winter, when the birds congregate around the open waters of the Mississippi River’s pools to ﬁsh, Ferryville’s event s scheduled for early March to take advantage of the birds’ mating/nesting season.

“The eagles are very active at this time of year,” said Sherry Quamme, co-chair of Bald Eagle Watching Day. “They’re paired, and they are mating—or they have been throughout February and are now getting ready to move into their nest. So they’re easier to identify or ﬁ nd in the branches that are hanging over the Mississippi River banks. You will see a lot of them.”

She added that the eagles—both male and female—stay close to their nests until their eaglets grow strong enough to ﬂ edge, usually at about 8 to 10 weeks, creating a window of prime eagle viewing that last through the first half of spring.

“Once the eggs hatch, the eagles will be co-parenting,” Quamme explained. “They need one partner to stay at the nest and the other to help find food sources. The eaglets grow rapidly over eight weeks, and the parents will continue to keep track of them and feed them.”

Visitors can learn all about eagles’ mating and nesting habits—and pretty much anything else eagle-related—at Bald Eagle Watching Day. The event’s primary purpose is to educate the public about the birds and wetlands that deﬁne Ferryville community.

“That’s why it’s free,” Quamme said of the event. “We want people to come because the whole purpose is to educate people about wildlife, the birds, habitat restoration, and just being responsible citizens.” 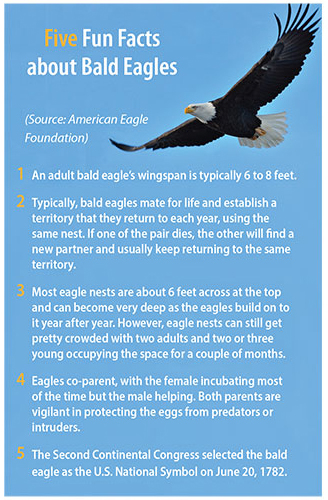 A guest presenter from the Eagle Resources Project in Decorah, Iowa, will be on hand as well to talk about a nest of eaglets—familiar to those who follow the Decorah Eagles’ Nest Cam—that were rescued and rehabilitated last year. Representatives from the U.S. Fish & Wildlife Service as well as Friends of Pool 9 will also conduct a program on eagle nest building, and a Department of Natural Resources official will offer a program about waterfowl along the Mississippi River.

Special children’s activities include a “hooting contest” where youngsters try to mimic the sounds of an owl. Guests can also enjoy complimentary refreshments from local producers.

Quamme said event organizers encourage all visitors to venture out after the day’s activities and put all their new knowledge in action as they go eagle watching.

“We want people to bring their binoculars,” she said. “After they leave, we give them a map of the nests in the area that we know of. We give people tips on how to spot eagles—for example, how to identify them so you know you’re looking at an eagle vs. a very large hawk.”

Ferryville has a spacious public viewing area equipped with a siting scope overlooking the river that makes for some great bird and wildlife watching. And with the village’s location along the Great River Road National Scenic Byway, there’s plenty of wildlife to see without ever leaving the car.

“We can give you directions and show you how to spot an active nest right from the road,” Quamme pointed out.

It may help to have an eagle eye, but with Ferryville’s abundance of birds, a regular human eye will do just fine.

Bald Eagle Watching Day is March 7 from 10 a.m. to 3 p.m. at the Ferryville Community Center 170 Pine St. Ferryville, WI 54628. For more information on bird watching in Ferryville, go to visitferryville.com.