“Not exactly a line truck” was Washington Island Electric Cooperative Manager Robert Cornell’s description of the barge and tug dispatched to repair the damaged submarine cable between the island and the Door County mainland at Northport. Photo courtesy of Curt Plaunt, Bois Blanc Island Ferry.

Wisconsin Governor Scott Walker on July 13 issued a disaster declaration requested by Washington Island Electric Cooperative, potentially opening up access to state or federal assistance for repair and replacement of a submarine power cable put out of commission by damage from a Lake Michigan “ice shove” this spring.

The state’s smallest electric cooperative receives power through a 37-year-old cable running under the Porte des Morts Straits to the Island from Newport at the tip of the Door County peninsula. Co-op Manager Robert Cornell told Wisconsin Energy Cooperative News examination of a 40-foot section of cable removed during splicing revealed apparent ice damage along its entire length.

Within half an hour after the cable failed early in the morning of June 15, co-op personnel restored power with backup generation and maintained service for the nearly two weeks needed to bring repair vessels to the scene, locate the fault, raise the damaged cable to the surface, and complete two splices.

The cooperative was working with the Department of Natural Resources on permitting for a replacement cable to cross Plum Island, a route where ice shoves have not historically presented problems. 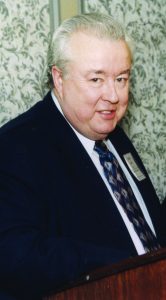 A Marshfield native, Adler was the 37th recipient of the Wisconsin Electric Cooperative Association’s highest honor, the Ally of Cooperative Electrification (ACE) Award. His entire, 45-year co-op career was served with Clark Electric where he began employment in 1960 as an office clerk. He later became office manager and achieved promotion to general manager in 1978, the position he held until retirement in 2005.

Adler was involved in electric cooperative leadership locally, statewide, and nationally. He served as a director of the Wisconsin Electric Cooperative Association and in the leadership of co-op managers statewide. He was also a leading figure in Clark County economic development, local government, and honoring military veterans, especially those from the Civil War.

A U.S. Army veteran, Adler is survived by Colleen, his wife of 51 years, three sons, seven grandchildren, and numerous relatives and friends.

A new regulation replacing the Obama administration’s Clean Power Plan was under final review by the White House Office of Management and Budget (OMB) this month before being released for public comment.

The plan it replaces was finalized in 2015 but never implemented. More than half the states challenged its legality and the U.S. Supreme Court blocked its enforcement in February 2016. It aimed at an overall 32 percent nationwide reduction (below 2005 levels) of carbon dioxide emissions from existing power plants by 2030, but set a different reduction target for each state. It would have compelled Wisconsin to achieve a reduction exceeding 40 percent.

The replacement rule, not yet released at press time for this edition of Wisconsin Energy Cooperative News, will reportedly seek emission reductions by means of improving efficiency (i.e., lower emissions per unit of electricity generated) at individual power plants.

A supposed beneficiary of a Trump administration plan to keep economically challenged nuclear and coal-fired power plants operating may close its nuclear units ahead of schedule regardless.

FirstEnergy Solutions, bankrupt generation affiliate of Ohio-based FirstEnergy Corp., said in June it still planned early retirement of four Ohio and Pennsylvania nuclear units. Earlier this year the company called for a federal bailout of its coal and nuclear plants, which it says have been unable to compete with low-cost natural gas and are not properly compensated for their emissions-free generation.

Similar issues were raised in July concerning yet another major generation source, when Dominion Energy said early retirement may end the operation of its Millstone nuclear plant in Connecticut because state officials propose not to allow the 2,100-megawatt facility to compete for zero-emissions power contracts until 2023.