Trends and technology give you more control over your electricity

The thermostat on your wall marks a new era in electricity 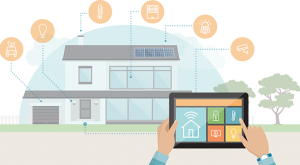 Whether it’s a dial-style older than you, or a digital model installed last month, it’s become more than just a way to set the temperature in your home. That familiar gadget is now a gateway to a world where consumers have more say over their electric service. You might call it designer electricity.

New technology, new regulations, and new ways of thinking are reshaping the utility industry. These days, consumers can regulate the temperature in their home more precisely. In some cases, they can even generate their own electricity with rooftop solar panels and sell the excess power back to their utility.

This new world started taking shape in the 1990s, says Andrew Cotter, a program manager for the Business and Technology Strategies Group of the National Rural Electric Cooperative Association. Cutting costs and raising reliability for sensitive electronic equipment was top of mind. Companies were willing to pay extra for electric service that wouldn’t blink off for even a fraction of a second. Other companies didn’t need such high reliability and looked for ways to pay less in return for occasional power interruptions.

“This is a trend that’s been going on for a long time,” says Cotter. “It’s just starting in homes.”

That little thermostat, he says, “can be the entry point for a lot of people to take advantage of smart-home technology and be more energy efficient.”
A new programmable thermostat can be set to avoid heating and cooling when you’re not home, or even set separate temperatures for rooms you don’t use often. 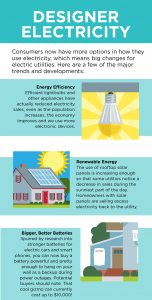 And that’s just the beginning of ways consumers are making more of their own energy decisions. Highly efficient light-emitting diode (LED) bulbs can be controlled from your smartphone. Washers and dryers sense how much water and heat need to be used to clean and dry your clothes.

All that efficiency makes a difference. Americans used about 2 percent less electricity in the past three years according to the U.S. Department of Energy’s Energy Information Administration (EIA). EIA expects that trend to continue for at least the next couple of years.

While efficiency saves energy dollars, the story of battery storage shows the bigger picture of how consumers are taking utility decision-making into their own hands.
The story began with homeowners using portable, motorized generators to power refrigerators and other crucial appliances during extended electric outages. Then battery technology improved, driven by the demand for smaller and stronger chargers for smartphones and other electronics. Battery companies thought their new and improved product could grab part of the portable generator market. Two years ago, Tesla, the high-end electric car company, announced a battery designed to look attractive enough to hang on your wall and provide backup power. Other companies followed.

In addition to promising relief from power outages, Tesla promoted its battery to the growing renewable energy market. Homeowners installing solar panels on their roofs ran into a problem—they generated a lot of electricity in the middle of a sunny day when no one was home to use it, and none at night, when they were home wanting to use electricity. Batteries could store the sunlight.

Co-ops and the empowered consumer

More options for consumers complicate work for electric utilities. Their business model didn’t plan for consumers storing electricity, reversing the flow through power lines as they sell electricity back to the utility, or for the declining sales resulting from energy efficiency.

“Utilities are navigating a lot of difficult decisions. They’re not selling as many kilowatt hours,” says NRECA’s Andrew Cotter. “They’re selling technology that reduces sales, so they’re working to come up with a sustainable business model. There are no easy answers.”

Electric co-ops are well-suited to working toward those answers, says Cotter. He sees the member-owned, not-for-profit business structure as an advantage in a more consumer-centric industry. He says innovation can be broadly tested in the network made up of more than 900 electric co-ops across the country. He even sees a plus in co-op geography—their service territories tend to be in rural areas.

“Co-ops are in a unique position, with long power lines that have to cover a much larger area,” he says. That is leading to use of energy storage technology to run pilot programs testing utility-scale batteries. “It might be really expensive to hook the last person up to the end of three or four miles of line. Co-ops might be in a more natural position to adopt batteries for use in those remote locations.”

No single co-op has to test all the new ideas, says Cotter. The nearly 1,000 co-ops share results from small pilot programs across the country. They’re experimenting on batteries, incorporating home renewable energy projects into the electric grid, and making the most effective use of energy-efficient technologies.

“Co-ops are developing a more robust understanding of how consumers want to use electricity,” says Cotter. “They are all working together so one co-op doesn’t have to do all the testing. There are no top-down solutions.”
While the march toward more choices in electric service might seem inevitable, Cotter sees it as “an uphill battle” because of one key question—is it worth it? “Do you want to spend $10,000 for a photovoltaic system on your roof and another $10,000 for a battery to avoid 45 minutes a year of power outage?” he asks.
And that’s where your old-fashioned thermostat could put you on the cutting edge of the trend toward more customer choice—you can decide you like things the way they are.

“People are generally happy with their electric service,” says Cotter. While a lot of hobbyists might want to design their own new ways to manage their electricity, a lot of others “don’t want to pay money for hardware to save only a few dollars a year.” 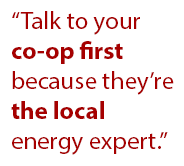 Cotter advises co-op members to check with their local electric co-op before making major power-use decisions. He says that in this new era of more energy options, vendors will be promoting batteries, solar panels, and other gizmos.
“Talk to your co-op first because they’re the local energy expert,” he says. “Vendors have a goal of selling products. The co-op, as a not-for-profit, member-owned utility has a different perspective that will be more in your interest.”