A new way of thinking about electric utilities could make your energy supply less vulnerable to weather-related interruption, more secure, and more environment-friendly.

The idea is microgrids—small, local systems of electric service that are connected to the larger, national electric transmission and distribution grid, but also capable of operating independently from the grid.

“How we deliver electricity is changing,” says Tom Lovas, a technical liaison and consultant with the National Rural Electric Cooperative Association (NRECA). “We have to think differently in how we operate the system.”

In a 2014 report, NRECA looks forward to a future power network it describes as a “grid of grids” using new technology and innovative ways of organizing the system of power lines to accommodate renewable energy, improve efficiency and security, and keep power flowing when severe weather strikes.

“Many futurists envision a grid built of smaller, independent or quasi-independent generating entities such as microgrids,” says the report “Achieving a Resilient and Agile Grid.” The report continues: “Change is necessary, and there is now an explosive growth in the tools that will allow us to manage the grid with more agility and precision.”

A good way to understand microgrids is to imagine a small island just off the mainland, with a few additional wires and power controls. Here’s what those additions might do:

That’s not pie in the sky. One energy firm estimates there are more than 120 microgrids in the United States, another 100 on the drawing board, and that it’s a market expected to grow 13 percent every year for the next 10 years.

And those numbers could be too small, because a microgrid can mean a lot of different things. While a microgrid is often thought of as a collection of homes, businesses, and generating sources, it could be as small as a single house, depending on your definition. What microgrids have in common is that each is an electric system connected to the nationwide grid that can also operate on its own.

“Any shared load of a single resource could be considered a microgrid,” says NRECA’s Tom Lovas. It could be a military base that needs to always have power without fail, or a manufacturing plant installing a bank of solar cells next door for an independent supply of renewable energy.

“A single generator that serves two houses would be a microgrid,” says Lovas. “There are a lot of different definitions of what a microgrid really is.”

Electric cooperatives are among the utility groups studying how to make the best use of this innovation.

“At NRECA, we’re looking at microgrids as a way to enhance reliability and resiliency, particularly for operating of critical requirements,” says Lovas. “In fact, for years we’ve had microgrids, in a way, by having emergency generators provided for hospitals and other critical facilities.” 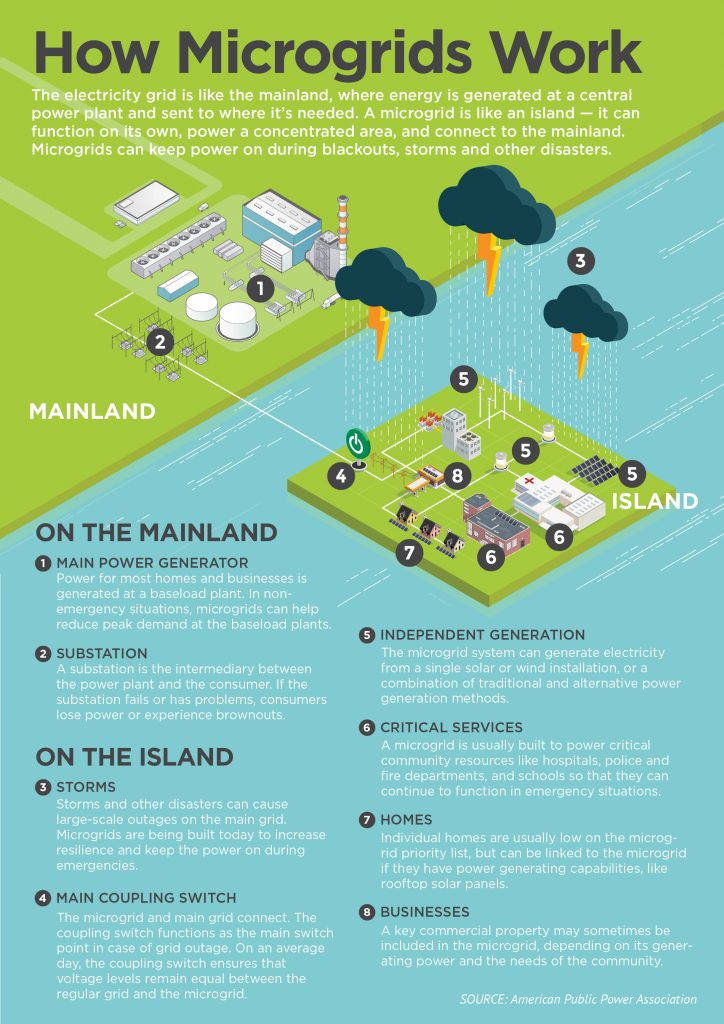 To understand microgrid development, it helps to know about two bits of jargon used by the people making the plans—both are mentioned in the title of the 2014 NRECA report.

One is “resilient.” The report explains the term as different from “reliable.” Reliability, says the report, refers to the goal of keeping the lights on all the time. A resilient system, on the other hand, is one that can bounce back quickly after a major outage. The objective in that case might be to recognize that power might be out for several days, so there needs to be a system in place that can provide backup electricity immediately for hospitals, gas stations, and pharmacies.

Last fall, the National Governor’s Association recommended that states consider microgrids, as part of a report on how to avoid some of the hardships caused by natural disasters.

The other term the microgrid planners use is “agile.” That refers to the ability of a utility system to handle new situations, like interest in renewable energy that might lead a homeowner to install a bank of solar cells on the roof and want to sell the excess electricity back to the utility.

In fact, one motivation for development of microgrids is the increasing use of renewable energy, which is expected to quadruple by 2020. Microgrids could push that growth even faster.

Among the roadblocks to renewable energy is the fact that solar doesn’t work at night and wind won’t work in calm weather. But as battery technology improves, a microgrid could connect all the parts to store renewable energy produced when the opportunity is there.

As Lovas explains, “While we can have a microgrid based on renewable resources, it really becomes even more effective as energy storage becomes more readily available.”

Microgrid thinkers are preparing for the future by planning ways to standardize designs so the “grid of grids” can be built more efficiently, and so that microgrids can connect to each other through the larger grid. They’re developing computer software for automatic operation both inside a microgrid and outside with other electricity sources and users. They’re writing safety standards, recognizing that with more generators on the system, there will likely be more two-way flows of electricity along the wires, making it even more critically important to keep track of when lines are energized. They’re even planning for higher levels of electronic security as computer hackers spread software bugs.

Future energy systems built around microgrids will in some ways mean a smaller utility world, but in many ways a more connected one.