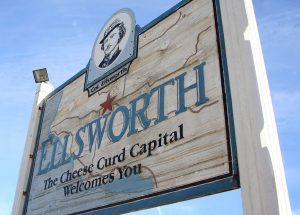 No one does cheese curds like Ellsworth. This Pierce County village is, after all, the Cheese Curd Capital of Wisconsin, a title bestowed upon the community in 1984 by then governor Anthony Earl. It’s a fitting honor for the home of the Ellsworth Cooperative Creamery, which has achieved world-wide acclaim for the fresh cheese curds it produces and sells daily.

It’s no surprise, then, that Ellsworth’s signature celebration is the Cheese Curd Festival held each June at Ellsworth’s East End Park. What might be surprising, however, is the extent to which the community goes to toast its native treat, not to mention the creativity involved in serving it up. Who knew cheese curds were so tasty dipped in a cinnamon-sugar mix? Or cooked in a brat, or blended into potato salad? No wonder the festival’s website advises visitors to wear stretchy pants. 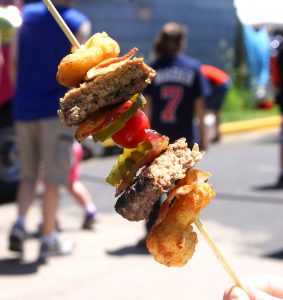 The need for stretchy pants is a fairly recent development. This year the festival will mark its 16th year, but it will bear little resemblance to the earlier versions. The Ellsworth Cheese Curd Festival Committee is in the midst of a three-year restructuring plan that has transformed the event from a typical small-town festival into a full-out foodie paradise.

Russ Korpela, executive director of the Ellsworth Area Chamber of Commerce, explained that the earlier Cheese Curd Festivals offered a wide variety of activities commonly found in small community celebrations everywhere, but very little in the way of a cheese-curd experience. He saw this as a missed opportunity, given the community’s natural hook.

“As communities look to differentiate themselves, it’s important to brand yourself around something that’s authentic,” he explained. “One of the great things about Ellsworth is we have this authentic brand of agriculture—cheese curds.”

The Ellsworth Cooperative Creamery, Korpela pointed out, attracts visitors from all over the country who come to purchase some of the 160,000 pounds of curds produced there each day. 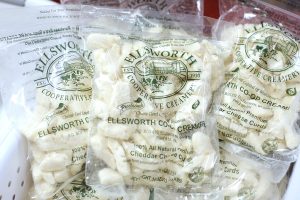 “The Cooperative Creamery enjoys about 80,000 visitors annually to its retail store,” he said. “They come to buy cheese curds. And about three quarters of those people are not from this area. So we knew there was potential—that people already enjoy coming into western Wisconsin.”

Therefore, Korpela said one of the festival committee’s strategic moves was to refocus on Ellsworth cheese curds as the center of the event.

Last year, the festival served up classic deep-fried curds hand dipped in a batter made especially for Ellsworth cheese curds by Sturdiwheat Foods in Red Wing, Minnesota. Another original creation introduced at the 2016 festival called for the battered and fried curds to be dipped in a cinnamon-sugar mix.

“That was extremely popular—we went through 2,300 pounds of cheese curds last year, which is about 5,000 servings,” Korpela said.

The committee also expanded the festival’s offering of food booths and kept the focus of vendor-supplied foods on cheese curds as well.

Jay Nesseth, member services manager at Pierce Pepin Cooperative Services, is a member of the Cheese Curd Festival Committee and in charge of the food booths.

“One of the main requirements is that each of the food vendors has to incorporate cheese curds into one of their menu items,” Nesseth said. “One of the other things we try to do is avoid duplicates, and that gives vendors an opportunity to experiment with their own recipes and come up with some really different options and ideas.” 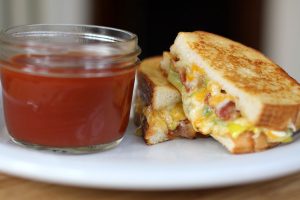 Visitors to this year’s Cheese Curd Festival will find new choices beyond the unique foods served up by the vendors. Along with the classic deep-fried cheese curds and signature cinnamon-sugar dipped curds, the festival will be introducing a new hot Buffalo wing curd developed by the Ellsworth Cooperative Creamery.

In addition, Korpela said refrigeration will be brought to the fest grounds this year so visitors can buy 1-pound bags of the creamery’s fresh curds right on site. The fresh curds will be available in a variety of flavors including garlic, ranch, pizza, and bacon. 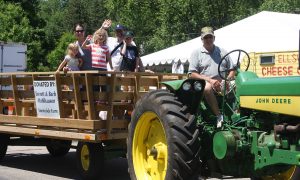 “We also really ramped up our tasting events,” he added. “This year we’ll have a milk-tasting event. There will be a separate ice cream tasting, and a tasting that will feature beer, wine, and cider. Most of these are produced somewhere in the 30- to 40-mile radius of Ellsworth.”

In addition, as part of the festival’s rebuilding program, organizers have narrowed the entertainment focus to music with an eye toward rebranding the event as a food and music festival. This year’s event will feature three stages, with a variety of live music performed by regional acts throughout the festival.

Efforts to refocus on cheese curds have extended beyond the Cheese Curd Festival. The Ellsworth Area Chamber of Commerce recently received two grants: One is a Joint Effort Marketing Grant from the Department of Tourism, used to launch a more sophisticated and extensive marketing and promotion plan for the festival.

The other is a Wisconsin Economic Development Corporation Main Street program called Connect Communities, which provides assistance to communities in finding resources. Korpela said this grant is being used to help find sources to establish the authentic cheese-curd brand throughout Ellsworth, all year long. 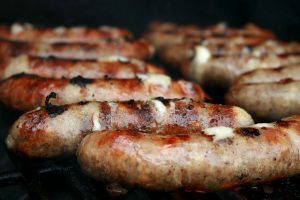 For example, Korpela said the Chamber is working with area restaurants to make sure they have cheese curds on their menu in some form or another year-round. Some unique items already served in restaurants around Ellsworth are cheese curd burgers and dishes with cheese-curd crumble toppings.

Other possible community projects, Korpela added, include adding interpretive signage around the community, with fun facts about cheese curds and their economic impact in the area.

At the center of these efforts is the Cooperative Creamery, which has been promoting Ellsworth through its famous cheese curds since it began producing them in 1968. 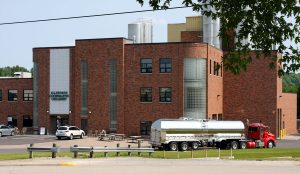 Nesseth pointed out that Ellsworth cheese curds can be found in restaurants throughout the country. He also noted that lines of loyal and dedicated customers from all over form at the creamery at 11 a.m. every day when the cheese curds are ready for sale, and for good reason.

“They’re fresh, they’re warm, they’re squeaky, and they are good,” he said.

Come to Ellsworth June 23 and 24 to see for yourself. Just be sure to wear stretchy pants.

The Ellsworth Cheese Curd Festival will be held Friday, June 23, from 4 to 11 p.m. and Saturday, June 24, from 10 a.m. to 11 p.m. at the East End Park on Wall St. in Ellsworth, just off Highway 10. To learn more, visit www.cheesecurdfestival.com. (All photos are courtesy of the Ellsworth Area Chamber of Commerce)