Decision makers for cooperatives and the state met recently in Madison for two days of educational seminars and legislative visits. 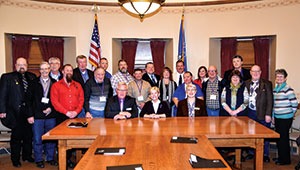 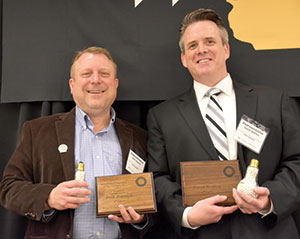 State Representatives Josh Zepnick (D- Milwaukee) and David Steffen (R-Green Bay) were presented with the 2017 Enlightened Legislators of the Year Awards. Both were honored for their support of electric cooperatives and utilities, willingness to listen to constituents, and tireless work on bills supporting electric co-ops and energy-related matters. 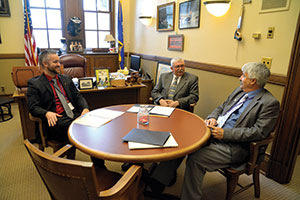 New Jersey-based Holtec International on the last day of March formally applied to the Nuclear Regulatory Commission for a license to build and operate what it calls the “HI-STORE Consolidated Interim Storage Facility” for high-level nuclear waste between Hobbs and Carlsbad, New Mexico, just west of the Texas state line.

The company said it expected the commission’s pre-licensure review to take about two years.

If the project moves forward, it could offer relief for nuclear power plant operators (and former operators such as Dairyland Power Cooperative) now storing spent fuel at power plant sites across the nation. The Holtec project would store spent fuel in 10,000 buried canisters within 288-acres on a 960-acre site, with the unused area serving as a buffer zone, the company said.

The HI-STORE project was first announced by Holtec last spring. Prior to filing its application last Friday the company carried out extensive groundwork in what would be the hosting communities, winning local government endorsements.

A similar though somewhat smaller facility now awaiting regulatory approval was proposed last year by Waste Control Specialists, headquartered in Dallas and already operating low-level radioactive waste storage at Andrews, Texas, where the high-level site would be developed if approved.

Carbon dioxide emissions related to energy production stayed on a flat trajectory for a third consecutive year in 2016, at the same time that the worldwide economy grew slightly more than 3 percent, according to a report from the International Energy Agency.

The Paris-based agency (IEA) is an autonomous organization of 29 member countries in the Organization for Economic Cooperation and Development.

The IEA listed several reasons for CO2 emissions leveling off after more or less slow but steady growth since 1980. Credited were growing generation capacity from renewable sources, fuel choices shifting from coal to natural gas, greater energy efficiency, and structural changes in the global economy.

The United States was the leader in reducing emissions, achieving a 3 percent cut (160 million tons) side-by-side with 1.6 percent growth of the economy. The IEA credited the combination of abundant shale gas supplies from hydraulic fracturing and renewable generation displacing coal.

So far no U.S. consumer has lost electric service to a cyberattack. April testimony before a Senate committee indicated the threat is growing, but so is the industry’s awareness, and steps are being taken to bolster defenses.

The Department of Energy reports a quarter-billion dollars invested for dozens of tools to ward off cyberattacks, and the industry’s real-time information sharing is greatly improved, the Committee on Energy and Natural Resources was told.

Duane Highley, president and CEO of the Arkansas Electric Cooperative Corporation, told the panel a “cyber-ninja force” with nearly 100 members has been created to deploy experts to utilities seeking assistance cleaning up systems that are targeted by attacks.

“You’ve been surveilled, you‘ve been mapped. You have to assume that you’ve been penetrated and go from there,” American Gas Association CEO Dave McCurry told the committee.