Ask anyone what is at the heart of electric cooperative’s success, and they will tell you—it’s the people. From the staff in the office to the linemen in the field, the workers are the backbone of the co-op’s success. But they have a secret weapon that many people don’t even know about—it’s called the Cooperative Response Center (CRC).

Just a relatively short time ago, back in the ’80s and ’90s, a storm created an “all-hands-on-deck” situation. Whether it was the middle of the night, on the weekend, or on a holiday, staff ushered into the office to take calls from members to coordinate where the outages were located so they could dispatch crews. That’s not how it works anymore, thanks to a group of 19 forward-thinking co-ops from Wisconsin, Minnesota, Illinois, and Iowa, who formed the Cooperative Response Center (CRC) as a member-owned cooperative service in 1992. 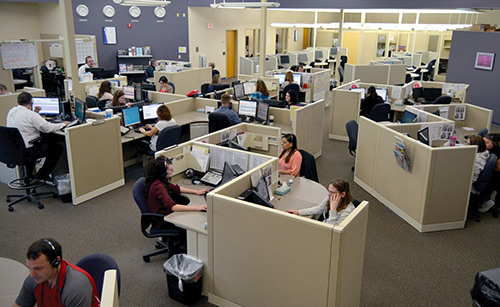 Calls for after-hours power outages often are routed to the Cooperative Response Center, with offices in Minnesota, Tennessee, and Texas. A Wisconsin co-op member may speak to a Tennessee or Texas employee when reporting a local outage. Photo courtesy CRC

Back then, following the cooperative principles of working together and caring for community, some co-ops offered two-way medical monitoring for members, which allowed residents in rural areas to stay in their homes as they got older. CRC was created as a central monitoring station for the medical alarms, but the opportunity for expansion was soon recognized. Today, CRC’s 24-hour operation takes after-hours and overflow calls for its member co-ops; manages full-service storm outage tracking and dispatching of crews; can handle billing and payment questions; and still does alarm monitoring, including two-way medical, security alarms, and substation video surveillance.

“They really are an extension of staff, so as calls come in during busy times in the local office, calls can go to CRC, so the member doesn’t have to wait or get a busy signal,” said Tim Stewart, CEO of Clark Electric Cooperative and former board member of CRC.

“You don’t even think about them; they’re just there, helping us do what we do,” said Dean Ortmann, CEO of Chippewa Valley Electric Cooperative.

The value of CRC, which now has offices in Minnesota, Tennessee, and Texas serving almost 400 electric cooperative members across the country, is critical during severe weather. When Hurricane Ida crashed into the Gulf Coast and even destroyed the headquarters of an electric co-op in Louisiana, CRC handled the excessive overflow calls from its two large member co-ops. But it’s Wisconsin-type weather events that create the most need, according to Dan Otteson, CRC senior regional business manager.

“It is often the widespread thunderstorms impacting multiple states in a short period of time and ice storms that create CRC’s largest call-volume events,” Otteson said.

“Simply stated, CRC allows us to concentrate on getting outages repaired,” Stewart said. “We are able to restore power faster because of the technology they utilize.” 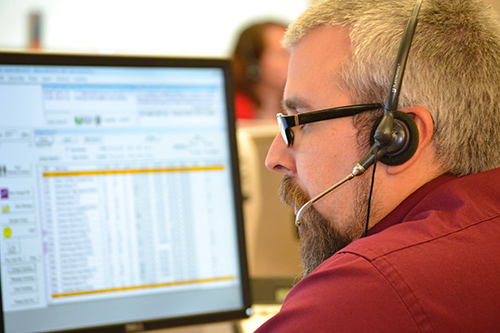 CRC serves nearly 400 electric cooperatives across the country and allows co-ops to save money on technology and staff needs by centralizing this service. Photo courtesy CRC

Back when Wisconsin co-ops were brainstorming about the value of a central monitoring system, no one could have known they were also building a safety net that could keep the co-ops operating seamlessly when a global pandemic forced offices to close and staff members to work from home. Some rural Wisconsin co-ops were not equipped for an immediate transition to working remotely, so CFC took over the calls.

Without the backup service that CRC offers, Wisconsin co-ops would require more staff. Still, even then, they could not match the services they provide, according to Stewart.

“Individually, we could not afford the technology and the type of interface they have they have. There’s no way we could duplicate that.” Stewart said. “It’s really impressive how much they can do, from video monitoring to text messaging, offering real-time updates about outages. Their service, from my perspective—it’s invaluable.”