This story is courtesy of Rock Energy Cooperative, with offices in Janesville and South Beloit.

Elise Ehrensing was in the right place at the right time when her heart stopped beating.

The right place was Rock Energy Cooperative’s office in South Beloit, where employees have been trained in CPR and first aid annually for at least the past 30 years. The timing was right because about a month earlier she had been promoted from part-time member services representative to full-time status.

“Had I not joined Rock as a full-time employee, I wouldn’t have been at the office because I didn’t work on Wednesdays,” Elise said. “Who knows where I would have been? I might have been at home by myself or out running errands when this occurred.”

But fortunately, on that Wednesday afternoon in April, she and Stephanie Cammelot, consumer accounting supervisor, were meeting with a member. Elise was explaining a co-op program when Stephanie noticed her co-worker was having difficulty finding the right words and seemed short of breath. Suddenly, Elise stopped talking and collapsed. 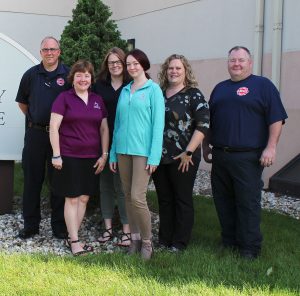 Elise Ehrensing, front center, is surrounded by some of the people who helped her, from left, South Beloit Fire Chief Michael Davenport, Sharon Janes, Stephanie Cammelot, April Nichols, and South Beloit firefighter Gary Brown, who was the first paramedic to arrive on the scene.

At that moment, Stephanie sprang into action. She quickly called 911 from the phone in the meeting room and then yelled to her co-workers for help. Many in the office had just completed their CPR training the week before and knew exactly what to do: start chest compressions and get the first-aid kit and AED (automatic external defibrillator). Knowing that rescue help was on the way, one employee volunteered to wait by the side of the road to direct the ambulance into the right driveway.

While Stephanie and Sharon Janes, manager of administrative services, took turns doing chest compressions, April Nichols, district office supervisor, positioned the AED pads so the machine could analyze Elise’s heart and direct when to provide a shock. Other co-workers stood ready to relieve Stephanie and Sharon if they grew too tired to continue CPR.

Neither Stephanie nor Sharon had administered CPR before, and both said it was much more difficult to work on a real person, especially someone you know, compared to the training dummy. The AED provided verbal prompts that continually told them to push harder, even though they were using their entire body weight on the chest compressions.

South Beloit rescue personnel soon arrived and continued working on Elise before transporting her to the hospital.

“When we arrived on scene, she was not breathing and her heart was not functioning,” said South Beloit Fire Chief Michael Davenport, who praised the quick action of Rock Energy employees. “You guys activated 911. You activated the AED. You started CPR. You did everything exactly the way it needed to be done. It’s truly because of the early CPR and early defibrillation that was done by the employees at the office that she was able to survive and also survive with no deficits. 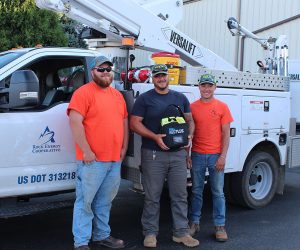 Rock Energy line workers do more than keep electricity flowing. This summer, a crew working in rural Rock County was approached by a woman who needed help for her husband who was having an asthma attack in their car. The workers reacted quickly, pulled him out of the car, started chest compressions, and activated the AED (automatic external defibrillator). They continued CPR until rescue workers arrived. Crew members pictured with the AED from their truck are, from left, Journeyman Linemen Billy Beggs and Justin Busfield and Apprentice Lineman Brody Back. All co-op vehicles are equipped with AEDs and first-aid kits.

“You guys do such a wonderful job there at the facility by making sure your employees have the necessary training that they need and that you continue on with that training on a yearly basis. It’s extremely important when you have a shop or a business to have basic first-aid and CPR training because when these emergencies happen it increases the survival rate. I feel we’re very fortunate to have a company here in South Beloit that takes CPR and first-aid training as seriously as you guys do.”

Elise, who is 32, said her doctor told her that one of two things might have caused her heart to stop beating. One is long QT syndrome, a heart rhythm condition that causes fast, chaotic heartbeats and can lead to death. She is awaiting the results of genetic tests to see if she has that syndrome. The other possibility is that her heart had an electric conduction issue.

“The doctor told me an electric conduction issue with the heart can happen to any person at any time,” Elise said. “Your heart gets out of rhythm. Normally it can get itself back into the right rhythm. Mine simply did not.”

To prevent that from happening again, Elise underwent surgery to have an ICD (implantable cardioverter defibrillator) inserted. When an ICD detects irregular heart rhythms, it sends a strong electrical impulse that shocks the heart out of the dangerous rhythm and allows normal rhythms to resume. The device also serves as a pacemaker, which stimulates the heart if an abnormally slow heart rate is detected.

It’s been about seven months since the device was inserted, and thankfully no issues have been documented with Elise’s heart during that time.

When Elise participated in the first-aid and CPR course at Rock Energy a week before her heart stopped beating that day, she had no idea that her co-workers would soon use their training to save her life.

“The doctor told my family I was clinically dead,” she said. “He also expressed just how critical this situation was by informing me that the average survival rate of those who go into cardiac arrest outside of a hospital setting is only about 5 percent.

“I am very thankful to everyone that they jumped into action so quickly and got help on the way as fast as they did because who knows what would have happened. Had they not been in that training, had Rock Energy not provided this training, I may have suffered permanent damage from this event or it’s very possible I would not even be here today.

“I really feel blessed that I have the position I do, to work at the place I’m at, and to have a company that cares enough for their employees to provide this training and equipment.”