At the end of April more than 2,000 electric cooperative members from across the country—including 77 from Wisconsin—descended upon Washington, D.C., to talk with members of Congress. Our National Rural Electric Cooperative Association (NRECA) organizes this massive effort along with statewide co-op organizations, to demonstrate the grassroots support for electric cooperatives across the country and show that decision-makers need to understand our
concerns.

My January column described efforts to restore expired tax credits for geothermal heating systems. This figured prominently in our April conversations: The geothermal credit was one of three priority energy tax credits we talked about with our representatives.

Another was a Nuclear Production Tax Credit to allow the few co-ops and municipal utilities that share ownership of emissions-free nuclear generation an opportunity for cost recovery similar to that available to investor-owned utilities.

The final tax credit request was to update an existing credit for carbon-capture technologies to reduce emissions from fossil fuel-based power plants. Thanks to widely deployed control technologies, emissions have been reduced dramatically over many years. But carbon-capture technology has been plagued by technical difficulties and cost overruns. It can’t be considered available for off-the-shelf use on a commercial basis, yet regulations currently under review effectively mandate its use. In the event that a mandate is adopted, stronger, permanent tax credits available to cooperatives could help address the cost issues and improve prospects for development of this technology. 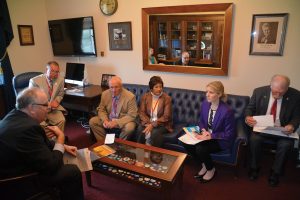 Another issue on our Washington agenda was improving federal land management policies so we can strengthen electric grid reliability. When Wisconsinites think about federal lands we usually visualize western states, but millions of acres in our state—such as the Chequamegon-Nicolet National Forest—are federal lands.

Required to meet state and federal reliability standards, electric cooperatives develop right-of-way and maintenance plans that include vegetation management. On federal lands, these activities require permits from the U.S. Forest Service and the Bureau of Land Management, oftentimes for routine maintenance including removing fallen trees and power-line upgrades. Unfortunately, it’s common for the review of permit applications and renewal of plans to delay routine projects for months or even years. We’re asking Congress to reform and streamline right-of-way reviews and establish time limits for approval so we can assure reliability of the electric grid.

The work our Wisconsin delegation accomplished during a few days in Washington was remarkable. They made their case on each issue to both of our U.S. Senators, Representatives Grothman and Gallagher, and the staff of our six other House members. Their effort epitomizes the beliefs of the founders regarding the right of citizens to petition their government. The dialogue between Wisconsin cooperative leaders and their representatives shows the respect our elected lawmakers have for the mission of electric cooperatives.

We’ll keep on reminding our representatives what’s important to our ability to keep electricity reliable, affordable, and safe in rural Wisconsin.