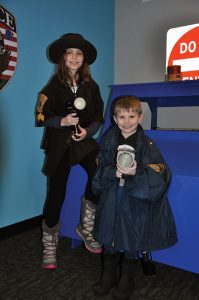 Rural Wisconsin offers an abundance of entertainment options suitable for families with little ones, but exploring a hands-on children’s museum is not typically one of them. For this kind of experience, most families have to travel to one of the state’s urban centers. However, families in Taylor County and surrounding areas need only to head to Medford for the kind of interactive, educational fun to be had in a bustling children’s museum.

That’s thanks to a persistent group of parents who came up with an ambitious plan and a community that embraced it. Because of their efforts, Huey’s Hideaway opened on Main Street in Medford in June 2017 to an enthusiastic welcome.

“We’re always busy,” said Museum Coordinator Kayla Ahles. “And I sign up a lot of birthday parties and field trips.” It’s not hard to see why.

The museum has two floors of interactive exhibits that encourage children of all ages to use their imaginations and explore new ideas through play. 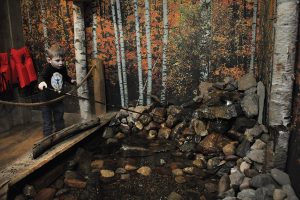 The ground floor houses an arts and crafts area, a baby/toddler room, and a City Life section with playhouse versions of downtown businesses such as a hair salon, grocery store, and bank. Downstairs, children can play in a pretend ice cream shop and a miniature police station. Another room is devoted to science, and yet another area focuses on industries specific to Taylor County, including agriculture. There’s also an area dedicated to the outdoors, set up with a camping theme. 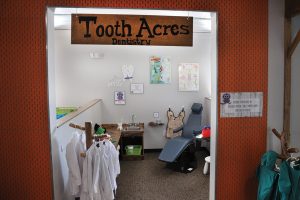 “Taylor Electric is proud to be supporting Huey’s Hideaway, which is an asset to our community. It’s just one of the ways we abide by the seventh cooperative principle, Concern for Community,” said Mike Schaefer, CEO of Taylor Electric. “It also exemplifies the fifth co-op principle—Education, Training, and Information—because kids learn a lot about electricity by playing in the STEM room we sponsor.”

Clark Electric CEO Tim Stewart agrees. “We believe in investing in future generations,” he said. “Many of the youth activities and opportunities we support are geared more toward teens and school-aged children, but Huey’s Hideaway reaches our very youngest members. And it’s just a great place for families to spend time together.”

Among the activities in the STEM room include a pedal bicycle generator provided by Taylor Electric. Children can take a turn pedaling the bike to see just how much energy is required to light up a light bulb. There’s also a giant Lite Brite display hand-made by Schaefer and his son-in-law, Dave Fleegel.

“All the rooms are sponsored,” Ahles pointed out. “That was one of our main goals with this museum—to include everyone in the community and keep everything local.”

Huey’s Hideaway began as an idea shared by a group of parents who got to talking about how nice it would be to take their families to a children’s museum without having to drive at least an hour to get there.

They visited children’s museums in Eau Claire, Madison, and Milwaukee and took notes on what they liked and what they thought could be adapted back home. They formed what is now a nine-person board of directors, and set to work raising funds, soliciting donated materials, and securing a building.

They also worked on creating a mascot. Ahles said the directors pulled together a list of possible ideas and names that would create a visual identity for the museum and lend itself well to a mascot. Huey is the name that stood out.

The cheerful, purple owl named Huey is now a regular presence within the museum, and he makes appearances at other community events as well.

Ahles said the community has been generous in its support, in a variety of ways. For example, she said the museum’s reading area is supplied with books from the Medford Public Library, which rotates the books every two weeks so young visitors always have something fresh to read. 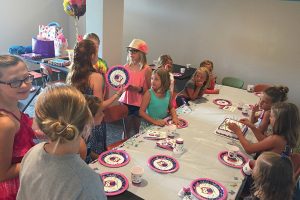 Also, community members have donated their time to serve as teachers or lead workshops for the frequent special programs and mini-camps offered at the museum. Last summer’s schedule of events included a Music and Movement Camp and several different Arts and Crafts Camps. 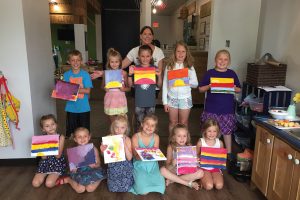 Ahles said many guests who visit Huey’s Hideaway for the first time say they are surprised to find such an extensive children’s museum in a community the size of Medford. However, she added that Huey’s Hideaway is still a work in progress, with more features in the works.

Future plans include adding more exhibits to the City Life area, including an eye clinic. The board is also developing a plan for a natural playground to be added outdoors. In addition, Ahles is preparing new summer camps and programs.

Whatever changes are made at Huey’s Hideaway, some things will remain the same. Children will have fun here exploring interactive exhibits, and they won’t have to travel to a big city to do it.—Mary Erickson