There’s just something about a bridge that gives it an almost romantic quality. Many a poet, painter, and writer of prose have been inspired by the sight of a bridge, or even just the idea of one. Perhaps it’s because a bridge is a symbol of triumph—a physical means of getting over an obstacle. Maybe it’s the whole notion of connection, with a bridge bringing two opposite sides together. It might be that an old bridge serves as a sentimental link to simpler times in the past. Or it could be simply aesthetic appeal.

Whatever the reason, bridges have a certain allure, especially the older bridges that have stood the test of time. With 28 bridges listed in the National Register of Historic Places (NRHP) as of 2020 and plenty others that are historically significant but don’t have the official NRHP designation, Wisconsin is home to a lot of beautiful old bridges. These bridges span a wide range of styles, purposes, and surroundings—crossing them not only takes you to the other side, but also immerses you in history, architecture, and nature.

Many of the state’s most notable historic bridges have been carefully preserved and are surrounded by nature areas or parkland, turning the bridge into a destination rather than simply a crossing point in a journey. Following are some of the unique historic bridges that we’ve discovered as we’ve traveled through the rural areas served by our state’s electric cooperatives. We hope they inspire you as they have us. 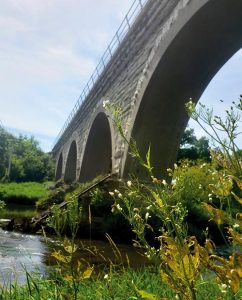 Built in 1869, this railroad crossing over Turtle Creek in Rock County is likely the oldest stone arch bridge in Wisconsin and the last remaining five-arch bridge in the country. The bridge is 387 feet long and stands about 75 feet over the ground. According to the Historic American Engineering Record, the Tiffany Stone Arch Bridge “is an excellent representative example of the stonework done by the Chicago & North Western Railway and is, by far, the most impressive stone arch railroad bridge in the state. The bridge was designed by Van Mienan, the chief engineer for the railroad company, who modeled it after a stone arch bridge in Compiegne, France.”
The bridge is still in use as a railroad crossing and is not accessible to foot traffic, but you can get a spectacular, close-up view thanks to 3.5 acres of beautiful county parkland along Turtle Creek, at the foot of the bridge, in Rock Energy Cooperative’s territory. Turtle Creek Parkway is located at 6528 S. Smith Road in the Town of Turtle, 10 miles northeast of Beloit. 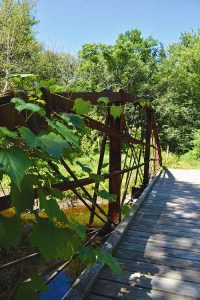 Just past Holmen, in Riverland Energy Cooperative’s territory, is McGilvray Road, in the Van Loon Wildlife Area. This 3.8-mile, in-and-out stretch of hiking trail is home to six restored historic bridges and the site of a seventh, prompting the nickname “7 Bridges Road.”
Although it’s now a rustic foot trail popular with nature lovers, at one time this path was indeed a road for vehicle traffic. The road got its start in the 1850s, when Alexander McGilvray established a ferry service carrying horse-drawn wagons across the Black River. He also established a road to the ferry. The ferry operation ended in 1892 and was replaced by a steel bridge over the main channel that operated for 62 years before being taken down in 1954 (now the marked site of Bridge No. 7 on the trail).
In the meantime, the road to the Black River’s main bridge was improved with eight wooden pile bridges that helped the increasing auto traffic navigate the swampy bottoms. These wooden bridges didn’t hold up well in an area prone to flooding, so between 1905 and 1908 they were replaced with five steel bowstring arch truss bridges, constructed by the La Crosse Steel Company using Charles Horton’s unique patented design. This rare style incorporated hook clips—or “Horton’s clips”—instead of rivets and bolts. A sixth bridge was added in 1920 but was later destroyed by fire and eventually replaced with another historic steel truss bridge relocated from Pierce County.
The bridges and trail are maintained by The Friends of McGilvray Road and the Wisconsin Department of Natural Resources. The parking lot at the trailhead has displays showing the history of the road and its bridges as well as a trail map. It’s located at N8327 Amsterdam Prairie Rd., Holmen. To learn more, visit www.7bridgesrd.org.

Not just for pedestrians…

Although the historic bridges highlighted in this article are mostly footbridges, located in areas with opportunities for hiking, biking, and other outdoor recreation, Wisconsin has plenty of historic bridges that can be driven across as well. Among them are the Marsh Rainbow Arch Bridge over Duncan Creek in downtown Chippewa Falls, pictured above (photo courtesy of Keith Wohlfert). This reinforced concrete bridge was built in 1916 and is one of only a handful of its type left in the country. It was the only bridge over Duncan Creek to survive a destructive flood in 1934. Recently restored, the bridge has some original components, including the globe lampposts.

Below is the Turtleville Iron Bridge, located just a few miles from the Tiffany Stone Arch Bridge outside of Beloit in rural Rock County. This bridge was built in 1887 by the Wisconsin Bridge and Iron Company and is one of the oldest of the remaining overhead truss bridges in the state. 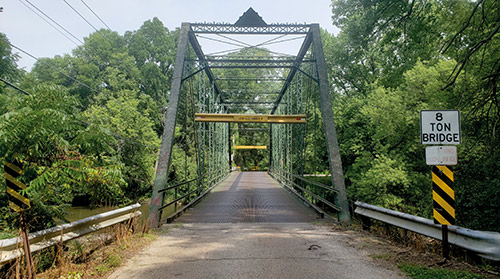 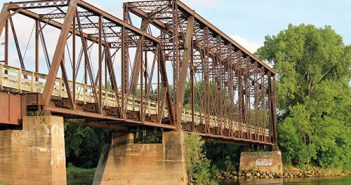 Nature lovers will also enjoy seeking out the historic railroad truss bridge that crosses the Chippewa River within the Dunnville Wildlife Area between Menomonie and Durand, in Dunn Energy Cooperative’s area. Known locally as the “Dunnville Bottoms,” this diverse wildlife area is a popular spot for biking, hiking, hunting, canoeing, and kayaking.
The entire area is bisected by the 14.5-mile Red Cedar Trail, which includes the Dunnville Bottoms Trail Bridge, open to bikers and hikers.
In an area where railroad bridges are a common sight, the Dunnville Bottoms Bridge stands out. At 860 feet long, it’s a massive structure. It’s also unique in that it’s a combination of several styles, with two distinctly different spans, one of them 230 feet long. The variations in appearance and style make it difficult to pinpoint exactly when the bridge was built. Records indicate it was built around 1905, although one end of the bridge is stamped with a plaque by Morse Bridge Company, which only operated from 1878 to 1888, according to historicbridges.org.
Whatever its actual age, the Dunnville Bottoms Trail Bridge is an impressive sight, offering spectacular views of the wildlife around it. To learn more about the Dunnville Wildlife Area, visit dnr.wisconsin.gov. 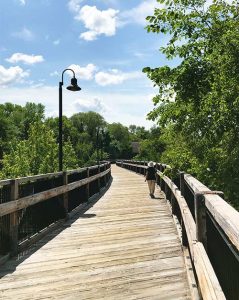 No collection of historic bridges in Wisconsin is complete without at least one from Eau Claire, “the City of Bridges.” Located in Eau Claire Energy Cooperative’s region, this city is home to nine distinctive footbridges.
One of the most recognizable is the Soo Line “S” Bridge that crosses the Eau Claire River in the city’s Banbury neighborhood. This bridge was built in 1910 by the Minneapolis Steel and Machinery Company for what became the Soo Line Railroad to accommodate freight and passenger service between Chippewa Falls and Eau Claire. Soo Line abandoned the line in 1991, and the bridge was resurfaced and repurposed as a footbridge in 2002. It’s now part of the Chippewa River State Trail and an iconic Eau Claire feature.

The bridge is 431 feet long. Its signature S shape is fun to walk across, but it served a practical purpose as well. The bridge was designed with these curves to connect railroad tracks running parallel on either side of the river without navigating the sharp turns of a linear bridge.
The bridge is easily accessible from a parking lot at 610 Gibson St., Eau Claire, with the Chippewa River State Trail extending from the parking lot.
Other historic footbridges in Eau Claire include the 1876 Phoenix Park Railroad Bridge, the 1886 Clairemont Avenue Railroad Bridge, and the 1880 Northwestern Railroad Bridge. All three cross the Chippewa River; the Phoenix Park and Clairemont Avenue bridges are also part of the Chippewa River State Trail. To learn more, go to visiteauclaire.com. 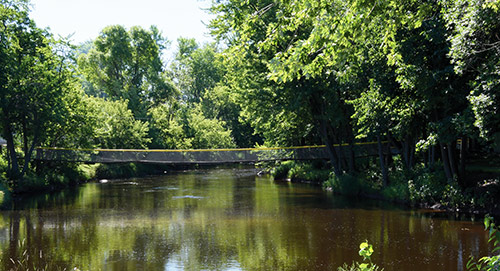 Another community that’s known for its bridges is Gilman, a quaint little village in western Taylor County, near the Chequamegon-Nicolet National Forest. Located in Taylor Electric Cooperative’s area, Gilman bills itself as “Home of the Swinging Bridge.” The centerpiece of the community is one of the last true swinging bridges in the state. Built in 1914–15, the bridge crosses the Yellow River to the spacious Gilman Village Park. The bridge’s original ironwork that supports the suspended cable bridge was shaped by the community’s very first blacksmith, Louis Zaborowski. 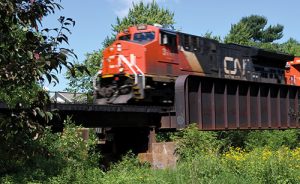 Although the swinging bridge is Gilman’s most famous bridge—and probably the most unique—there are other interesting bridges to cross here. A second pedestrian bridge extends across the river on the other side of the park, while some other historic structures are located elsewhere along the Yellow River, including a 1927 pony plate girder bridge that’s still in heavy use as a railroad bridge.

Is there a unique historic bridge in your area? Upload a photo at https://wecnmagazine.com/submit-a-photo/. We’d love to make more connections!
—Mary Erickson