As we close in on the 2020 presidential election I’m surprised by the groups and individuals advocating abandonment of the electoral mechanism designed with great care by the Philadelphia Constitutional Convention of 1787.

At that time, direct election of the country’s leader was an idea unique to the United States. Convention delegates faced the opportunity—and the risk—of creating a system that needn’t satisfy any other nation’s requirements but pretty much had to succeed on the first try.

There were lots of competing concerns among the delegates. Some were dead set against letting the people elect the president by popular vote. Some were concerned that allowing Congress to pick the president guaranteed the executive and legislative branches would engage in corruption. Others worried that the big states (back then, Virginia was the 800-pound gorilla in the room), would unduly influence policy to the detriment of the small states. Other delegates were concerned that free northern states should have more influence than slaveholding southern states, and vice-versa.

From the debate over all these issues emerged the concept of a body of presidential electors apportioned by state. Each member of this Electoral College would have one vote, and the number of electors from each state would be the same as that state’s number of U.S. senators and congressional representatives. Awareness of this history and appreciation for the reasoning behind it have declined, and the arrangement has come under attack. 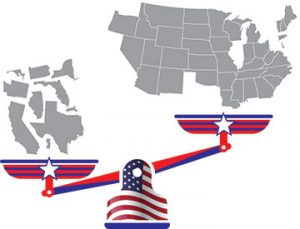 Switch to a straight popular vote, and we could easily find ourselves with California, Florida, Illinois, Maryland, Massachusetts, New Jersey, New York, Pennsylvania, Texas, and Washington being the only states that matter. The other 40 become irrelevant because their combined populations are less than those of the listed 10.

In my lifetime we’ve seen three presidents elected without having won a majority of the nationwide popular vote. Thus it is now proposed to eliminate or bypass the Electoral College and determine the winner by popular vote alone—an easy answer but one burdened with very large risks.

Today, both in the primary and caucus season and during general election campaigns, presidential candidates spend substantial time in some of the least populous states because in the political calculus of winning nationwide, the Electoral College keeps them relevant. Switch to a straight popular vote, and we could easily find ourselves with California, Florida, Illinois, Maryland, Massachusetts, New Jersey, New York, Pennsylvania, Texas, and Washington being the only states that matter, the other 40 being irrelevant because their combined populations are less than those of the listed 10.

The likelihood of those 10 states all voting the same way is perhaps small, but there are subtler and potentially graver threats. The cities of New York and Los Angeles not only dominate their statewide elections; they are more populous than Wisconsin, Iowa, Minnesota, North and South Dakota combined. Midwestern states could become meaningless in deciding every policy issue that affects them and the Heartland’s economy. East and West Coast cities would have the voting power to dictate agricultural and land-use policies minimally applicable to them but crucial to most of the country. Eighty-five percent of Americans living in areas served by electric cooperatives reside in the 40 states that would stand to become non-factors in national elections. In other words, good luck getting presidential candidates’ attention on issues affecting the cost and reliability of electricity in rural areas.

The Electoral College ensures that all states matter. It compels candidates to address issues that are relevant in all parts of America. The constitutional convention managed to strike a balance that has prevented one or a few population centers from bulldozing the entire nation in choosing a president.

Today’s polarized politics fuel the ugly desire to win at any cost and a take-no-
prisoners attitude toward people with differing views. Bad as that is, it will quickly become a lot worse if we throw overboard the 232-year-old compromise that makes it necessary for national candidates to show respect for voters in more than a handful of states.