Electric cooperatives are committed to providing safe, reliable, affordable energy to their consumer-members, and in many parts of the country that includes increasing the availability of solar power.

“Co-ops are big supporters of an ‘all sources’ national energy policy,” said Debra Roepke of the National Rural Electric Cooperative Association’s (NRECA) business and technology strategies group. “Our challenge is finding ways to get sustainable value out of investments that not only help meet the needs of co-op members today, but also control their costs in the future.”

In that role, she worked with generation and transmission cooperatives (G&Ts), electric cooperatives, and other organizations involved in planning, developing, and assessing the value of various approaches to solar projects. 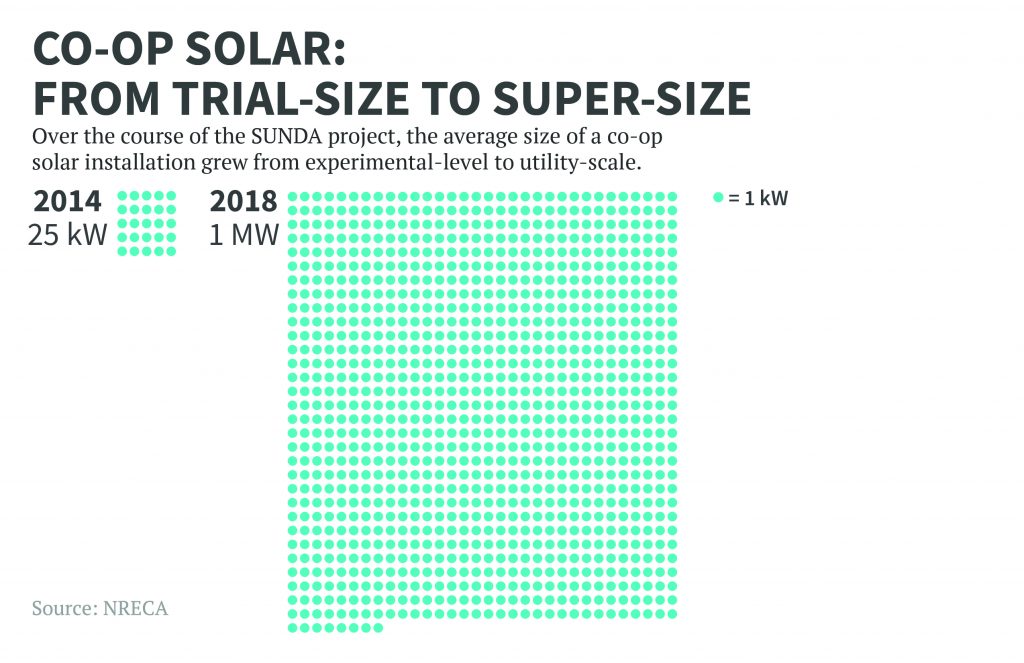 Between 2013 and 2018, total solar capacity owned or contracted by electric co-ops grew from 94 megawatts to 868 MW. Electric co-ops host more than two-thirds of all utility-sponsored community solar projects.

Wabash Valley Power, an Indianapolis-based G&T, owns 1.7 MW of community solar located at five sites in Indiana, Illinois, and Missouri and is adding 7.2 MW of additional capacity to that program. 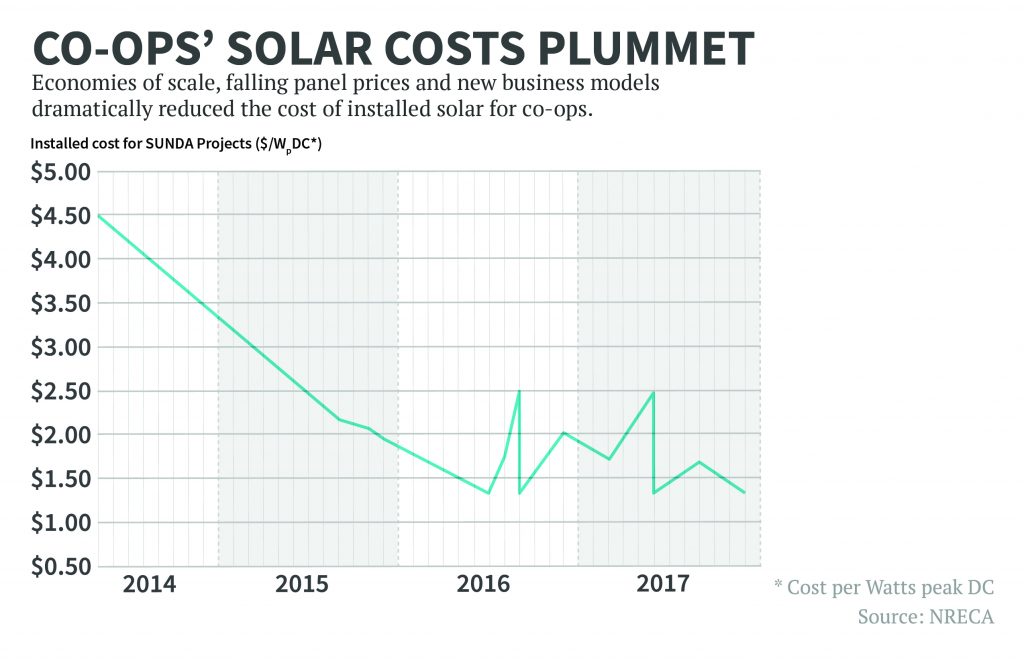 Solar projects regardless of size or structure are helping to build a knowledge base accessible to all electric co-ops.

“Co-ops need to be the trusted energy advisor for our members when it comes to solar energy,” said Jeff Pratt, president and CEO of Green Power Electric Membership Corp.

The renewable energy cooperative now provides solar energy and other renewables to 38 electric co-ops in Georgia.

“Growing demand for solar has helped to make the technology more viable and ultimately led to more competitive pricing,” said Pratt. “You can’t meet overall demand with solar, but it can play a big role in helping co-ops control power costs as a hedge against fuel prices.”

ated in the SUNDA project to gain more experience with different types of solar initiatives. According to Pratt, that’s going to be increasingly important as consumers gain access to more choices in how they meet their energy needs.

“Many co-op members want choices, and one of those choices is the option of meeting some of their needs with solar power,” said Pratt.

Several SUNDA participants contend that declining prices have helped move solar from a demonstration or educational technology to a competitive asset within wholesale generation portfolios in many areas of the
United States.

“In areas blessed with good sunshine, this will have long-term impact on better products and lead to better financial transactions,” said Pratt. “As finance entities deal with more of these projects, they’re assessing the risks more favorably, and that’s having a positive impact on our abilities to pursue development of larger arrays.”

Solar products and components are improving, and the manufacturing and vendor base continues to expand. That’s led to substantial declines in the cost for deployed solar. According to NRECA, the per-watt costs declined from $4.50 for the first research project in 2013 to less than $1.40 per watt in 2018.

“The ultimate economics of solar lends itself to serious consideration as a daytime resource,” said Todd Bartling, vice president of renewables development for the National Renewables Cooperative Organization (NRCO).
Carmel, Indiana-based NRCO is one of several organizations that participated in SUNDA projects and are now using that experience to help electric co-ops pursue other renewable projects.

“The industry is working to reduce the costs of the underlying equipment, installation, and financing,” said Bartling. “Those improvements will help ensure the technology’s commercial viability when or if tax incentives designed to hold down costs are phased out.”

Many SUNDA project participants agree that shared experiences and open discussions of problems and solutions are among the greatest strengths of the electric co-op movement.

The four years of research-based upon projects of varied sizes and financial structures, now operating under different environmental conditions, ensure that the SUNDA project will serve as a practical reference work for electric co-ops, said NRECA’s Roepke. “Lessons from their real-world experiences form the core of a set of tools that have already been used by hundreds of other electric co-ops across the nation.”